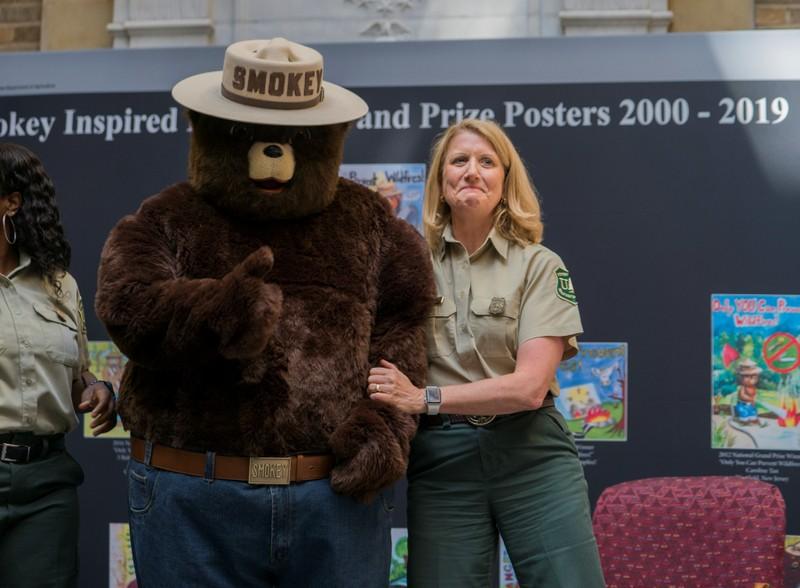 DENVER (Reuters) – Smokey Bear, the cartoon mascot for one of the longest-running public service advertising campaigns in America, warning of wildfire dangers, turned 75 on Friday.

An officer of the U.S. Department of Agriculture Forest Service celebrates Smokey Bear’s 75th Birthday during a ceremony on the USDA Whitten Patio in Washington, D.C., U.S. in this August 9, 2019 handout photo. Tanya E Flores/USDAFS/Handout via REUTERS

Smokey, known for the motto “Only you can prevent forest fires,” was launched as the official fire-prevention poster creature for the U.S. Forest Service on Aug. 9, 1944, replacing the cartoon deer Bambi, from Walt Disney’s animated film of the same name.

Smokey’s message remains as salient today as it was then, as the overwhelming majority of U.S. wildfires are sparked by careless human activity such as unattended camp fires or improperly discarded cigarettes, according to U.S Forest Chief Vicki Christiansen.

“And I’m certain that 75 years from now, Smokey will still be active in his duty of spreading the wildfire prevention message,” Christiansen said in a statement, calling the fictional bruin the “hardest-working bear in the world.”

The brown bear in a yellow ranger’s hat and blue jeans, often depicted carrying a shovel, was created to educate the public about fire prevention in America’s wildlands, the Forest Service said.

The original slogan, “Only you can prevent forest fires” was revised in 2001 as “Only you can prevent wildfires” to reflect more modern terminology recognizing all manner of outdoor blazes. The name of the character, who image and name are protected by federal law, was deliberately spelled differently from the adjective “smoky.”

Among those providing the baritone voice of the bear in radio and television spots over the years have been cartoon producer Gene Moss, who died in 2002, and actor Sam Elliott.

Six years after the cartoon character was born, Smokey gained a real-life namesake. Firefighters battling a blaze in the Capitan Mountains of New Mexico in 1950 rescued an orphaned black bear cub found clinging to a charred tree. The cub had suffered severe burns to its paws and hind legs.

After the cub was nursed back to health, a New Mexico ranger gave the bear to the Forest Service with the condition that the animal be used for wildfire education and mitigation, and the agency promptly named its new live mascot for the cartoon symbol.

The real Smokey was sent to the National Zoo in Washington, where he lived until his death in 1976. His remains were returned to New Mexico and buried near where he was rescued in what is now known as the Smokey Bear Historical Park.

Reporting by Keith Coffman in Denver; Editing by Steve Gorman