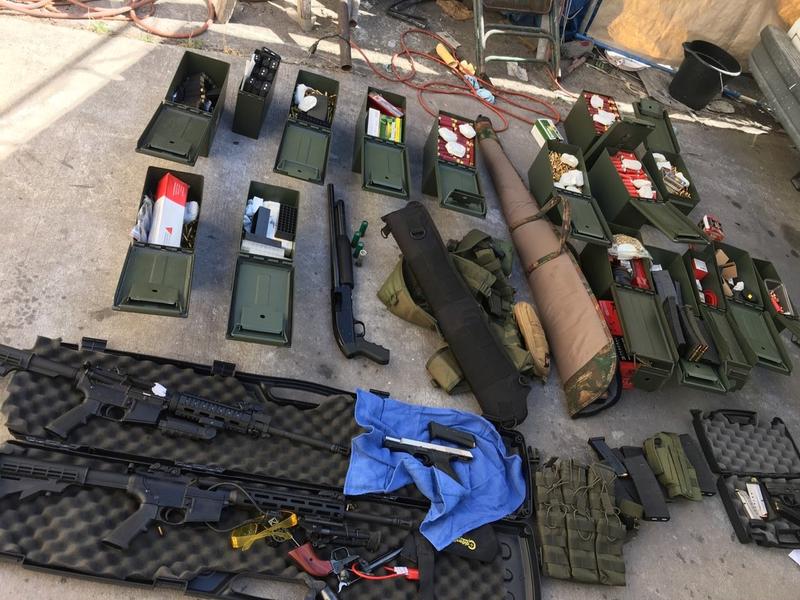 (Reuters) – Two men in California and Wisconsin who had large firearms caches have been arrested in separate incidents for threatening attacks on their workplaces, authorities in the two states said, following a spate of recent mass shooting threats and three deadly attacks since July.

In Southern California, Long Beach police said they arrested Rodolfo Montoya, 37, on Tuesday, a day after he threatened to attack the hotel where he worked because he was upset over an employment-related issue.

Police said they found an arsenal that included illegal high-capacity magazines and an assault rifle at Rodolfo’s home in nearby Huntington Beach after they were notified of the verbal threat by a fellow employee of the Long Beach Marriott.

“Because this was reported, I firmly believe many lives were saved,” Police Chief Robert Luna said at a news conference.

Montoya was being held on $500,000 bail after being charged with manufacturing and distributing assault weapons, possessing an assault weapon and making a criminal threat, police said.

It was not immediately clear whether Montoya, who the Los Angeles Times said worked at the hotel as a cook, was represented by a lawyer.

In Wisconsin, 31-year-old Kevin Pinkham was arrested on Tuesday after telling a co-worker at the Eau Claire distribution center where he worked on Aug. 15 that “I’m going to shoot this place up,” according to a criminal complaint.

An investigating officer concluded that “multiple employees at Menards Distribution Center feared for their life based on the defendant’s threats,” the complaint said.

The complaint said Pinkham denied making the threats, but admitted having replied to a text from his girlfriend who asked if he was having a bad day, “No, I’m just going to kill everyone.” He told investigators he was only joking, the complaint said.

Police said they found several rifles, handguns and ammunition at Pinkham’s home, as well as a loaded Walther 9mm pistol in his car.

Pinkham, who was charged with making terrorist threats and disorderly conduct, was being held on a $10,000 cash bond and was scheduled for a court appearance next Tuesday. His attorney did not immediately reply to a request for comment.

Meanwhile in Mount Clemens, Michigan, a 30-year-old man identified as Cory Fraser was to be arraigned in court on Thursday accused of threatening to shoot 200 police officers.

Fraser was arrested on Wednesday after a former classmate told authorities that Fraser was very upset when they spoke on Monday, stating that local police were biased against him and saying he was angry only six officers were wounded during a shooting last week in Philadelphia, according to prosecutors.

Fraser is charged with making a false threat of terrorism and faces 20 years in prison if convicted, Macomb County Prosecutor Eric Smith said in a statement.

The arrests come amid a slew of threats in the past week to carry out mass shootings and follow mass shootings since late July that killed at least 34 people in Gilroy, California; El Paso, Texas; and Dayton, Ohio.