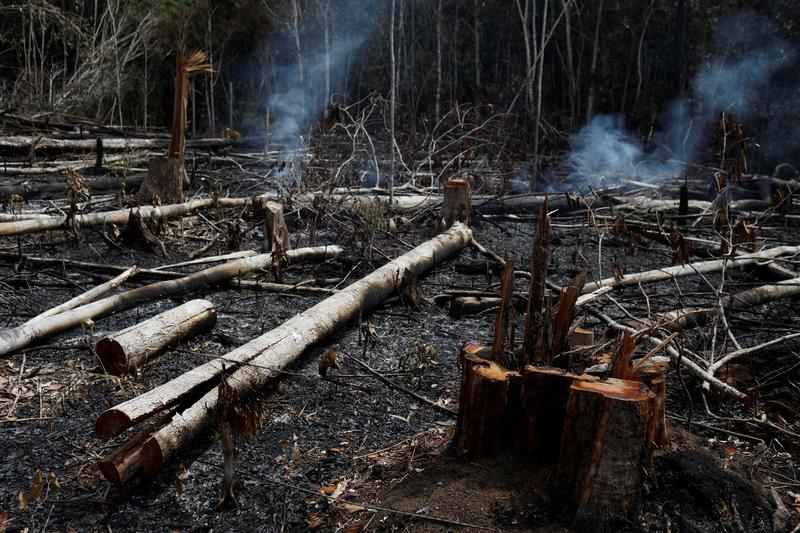 HUMAITA, Brazil (Reuters) – There are no lights in sight but the night sky glows a dusky yellow, for the Amazon is burning.

A tract of Amazon jungle burns as it is being cleared by loggers and farmers in Novo Airao, Amazonas state, Brazil August 21, 2019. REUTERS/Bruno Kelly

The smell is of barbecue, of wood charcoal up in flames. During the day the sun, usually so fierce in these parts, is obscured by thick gray smoke.

For the last seven days Reuters has repeatedly driven a 30-kilometer (18.6 miles) stretch from Humaita towards Labrea along the Trans-Amazonian highway, watching a fire eat its way through the jungle.

At first, on Wednesday of last week the raging fire stood just a few yards (meters) off the roadway, the yellow flames engulfing trees and lighting up the sky. By the weekend the fire had receded into the distance but cast an orange glow several stories high.

The fire is just one of thousands currently decimating the Amazon, the world’s largest rainforest and a bulwark against climate change.

Wildfires have surged 83% so far this year when compared to the same period in 2018, according to Brazil’s space research agency INPE.

The government agency has registered 72,843 fires, the highest number since records began in 2013. More than 9,500 have been spotted by satellites since last Thursday alone.

On Wednesday, Brazilian President Jair Bolsonaro enraged environmentalists by making unfounded claims that non-governmental organizations were starting the fires out of anger after he cut their funding.

Global outrage has torn through social media, with #PrayforAmazonas the world’s top trending topic on Twitter on Wednesday.

Reuters observed plumes of smoke billowing from the forest, reaching hundreds of feet (dozens of meters) into the air, during a weeklong trip to southern Amazonas and northern Rondonia states.

“All you can see is smoke,” said Thiago Parintintin, who lives in an indigenous reserve just off the Trans-Amazonian highway, pointing to the horizon.

A yellow truck bearing the logo of Brazil’s forest fire fighters had just rushed past.

“It didn’t use to be like this,” Parintintin added.

A 22-year-old trained indigenous environmental agent, Parintintin blames the increasing development of the Amazon for bringing agriculture and deforestation, resulting in rising temperatures during the dry season.

Fires start in the underbrush that has been drying over the dry season. Smoke envelopes still lush patches of fronds and palm trees, as the understory smolders before the upper tiers of vegetation catch fire.

The smoke from the resulting fires hangs at the horizon like a fog.

Gabriel Albuquerque, a pilot in Rondonia state’s capital city of Porto Velho, said that in four years of flying his small propeller plane it has never been this bad.

“It is the first time that I’ve ever seen it like this,” he said, as he prepared to go up.

From the sky, the fires ranged from small pockets to those bigger than a football field, with the smoke making it impossible to see behind the front line of flames to discern the full extent of the blaze.

Sometimes the smoke was so thick the forest itself appeared to have disappeared.