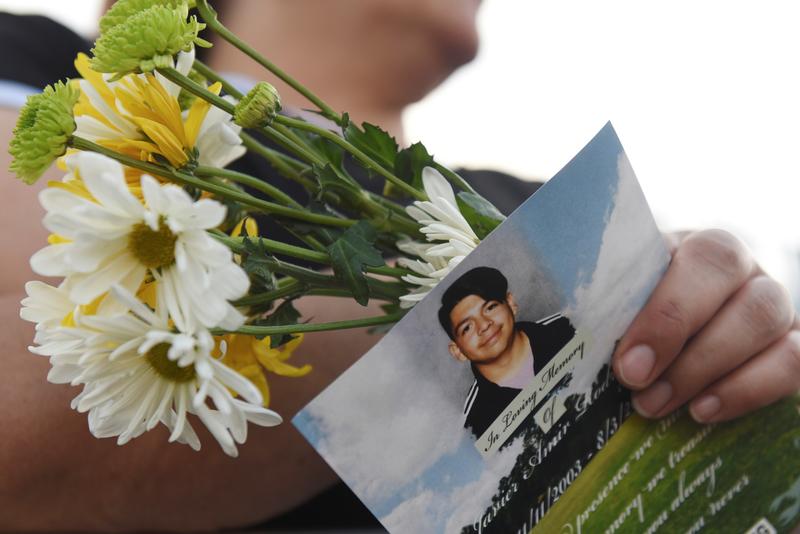 HORIZON, Texas (Reuters) – Several hundred students, teachers and relatives filled a high school athletic stadium in Texas on Monday to honor a teenager of U.S.-Mexican citizenship who was the youngest of 22 killed in a shooting rampage police suspect was driven by racism.

A woman holds a copy of the program at a vigil in honor of Javier Rodriguez, who was killed while shopping at Walmart, two days after a mass shooting at a Walmart store in El Paso, Texas, U.S. August 5, 2019. REUTERS/Callaghan O’Hare

Javier Rodriguez, 15, was one week into his sophomore year at Horizon High School, where he played on the soccer team, when he was cut down by gunfire at a Walmart store on Saturday in the west Texas border city of El Paso.

“Javier was just a young man full of life, running in this same stadium we’re in now,” Juan Martinez, superintendent of the Clint Independent School District outside El Paso, told the crowd. “He didn’t deserve to die in a tragedy like this.”

The hour-long memorial service in the El Paso suburb of Horizon opened around twilight with the school principal welcoming Javier’s parents and sister onto a stage, where they released a white dove into the clear evening sky.

A group of teachers simultaneously released 21 more doves, one for each of the other victims, ranging in age from 23 to 90, most of them with Hispanic surnames.

A 21-year-old white man who police said drove more than 600 miles (956 km) from suburban Dallas to El Paso to carry out the shooting spree and surrendered to police at the scene has been charged with capital murder.

Authorities have said they are investigating the rampage as a hate crime, citing a racist, anti-immigrant manifesto posted online shortly before the shooting, which they attributed to the suspect, Patrick Crusius.

In it, the author called the Walmart attack “a response to the Hispanic invasion of Texas”.

As the superintendent spoke, a member of the high school band, overcome by emotion, was escorted away sobbing.

Not only was Javier the youngest killed on Saturday, he perhaps as much as anyone represented the mixed heritage and culture of El Paso, which together with Ciudad Juarez, Mexico, just across the Rio Grande and the neighboring New Mexico city of Las Cruces, forms the largest bi-national, bilingual metropolitan area in North America.

Friends said Javier held dual U.S. and Mexican citizenship. Police identified seven others killed in the attack as Mexican nationals, and one as German. The rest were U.S. citizens, police said.

Former Texas congressman Beto O’Rourke, an El Paso native seeking the 2020 Democratic presidential nomination, also spoke, mentioning that Javier’s uncle was among the wounded, describing the nephew’s life as “an expression of the hope we now have in one another.”

O’Rourke added, “Please understand that this violence, this hatred will not define this community, nor will it define the Rodriguez family.”