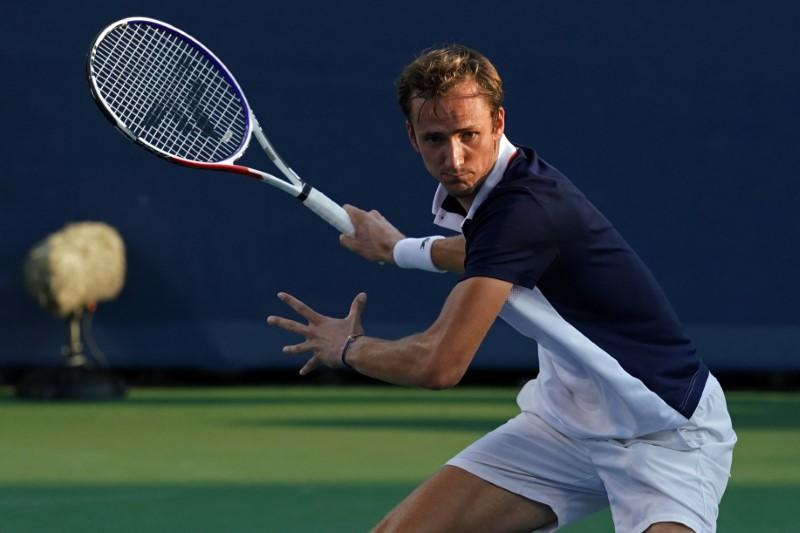 (Reuters) – A resilient Daniil Medvedev changed tactics midway through the second set and shocked world number one Novak Djokovic 3-6 6-3 6-3 in the Cincinnati Masters semi-finals on Saturday.

After losing the first set, the Russian ninth seed decided he had nothing to lose midway through the second.

He became more aggressive in general and on second serve in particular, and the complexion of the match changed in a heartbeat as the previously dominant Djokovic suddenly looked vulnerable.

“I was so tired in the first set and playing Novak, I thought I’m not going to be able to keep the intensity,” world number eight Medvedev said in a courtside interview with ESPN.

“Then there was one momentum change in the second and I just started playing unbelievable.”

Asked why he had started bombing his second serve, Medvedev said it was par for the course when behind.

“I do it all the time when my second serve doesn’t work. Novak, he was destroying me on the second serve so at one moment, at three-all, love-30 I’m like okay, what’s the matter.”

He reeled off four successive points, including an ace on second serve, to hold and then broke Djokovic in the next game by ripping a winner down the line to seize the initiative.

Medvedev never looked back and he was delighted to win a match he acknowledged would often have slipped away in the past.

Medvedev, who also beat Djokovic in April at Monte Carlo, will play Belgian David Goffin in the final on Sunday.

It will be the third successive final for 23-year-old Medvedev, who lost to Nick Kyrgios in Washington and Rafa Nada in Montreal.

The 16th seeded Goffin beat France’s Richard Gasquet 6-3 6-4 in the other semi-final.

“I’m really happy,” said Goffin. “I’ve played the best tennis here in the past few years… It’s a great moment for me.”

A quick break saw Goffin surge to a 4-1 lead with a backhand winner down the line in the first set.

Gasquet grabbed a 2-0 lead in the second set before Goffin claimed five of the next six games.

He won the set and the match when a Gasquet backhand was long.

Goffin had received a walkover into the semi-finals after Yoshihito Nishioka was forced to withdraw due to food poisoning.

“It was almost a day off, so I was fresh and physically 100 percent today to play against Richard,” the Belgian said.

Goffin added that he was “lost” after the walkover.

“I didn’t know what to do. Do I have another practice session, go to the physio and have some treatment? I didn’t know,” the Belgian said.

“I decided to go on the court for some practice and do what I normally do after.”