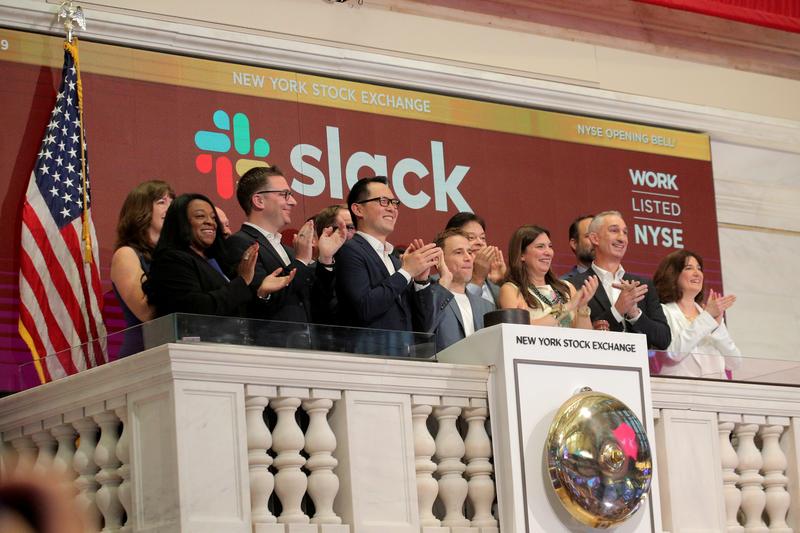 NEW YORK (Reuters) – Shares of Slack Technologies Inc, the fast-growing workplace messaging and communication platform, debuted in public trading at a price of $38.50 each, valuing the company at more than $23 billion, well above the $16 billion reference point set by the New York Stock Exchange.

The stock soared 54.2% to more than $40.08 at midday on Thursday. The NYSE on Wednesday set a reference price of $26 a piece. The reference price is not a trading price but is used in the process of building a book of orders.

Slack went the unusual route of a direct listing on the New York Stock Exchange on Thursday, which is different from a traditional IPO because it does not raise fresh funds. The listing is another test for a method pioneered last year by music streaming business Spotify Technology SA.

Slack’s debut follows a spate of much anticipated technology IPOs, some of which, including Uber Technologies Inc and Lyft Inc, had disappointing starts to trading.

The direct listing model offers Slack an opportunity to save significantly on investment banking fees and avoid agreements that would otherwise prevent many current shareholders from selling their stock.

“We think a direct listing is a more effective and efficient way to get to a normalized level of supply and demand without the constraints of an IPO,” said Allen Shim, Slack’s chief financial officer.

Slack’s direct listing could have implications for other large technology companies such as Airbnb Inc, which is considering going public through a similar approach, a person familiar with the matter said.

Spotify’s direct listing in April 2018 was perceived as a success at the time, with a healthy number of buyers and sellers.

More than a year later, Spotify’s stock is trading at around 15% percent below where it debuted as the company sacrifices profit margins for growth.

“But it’s definitely more appropriate for companies that have raised larger sums for longer periods of time in the private market, and are really wanting to give their investors an upside or an exit.”

Revenues for the San Francisco-based Slack soared more than 80 percent to $400 million in 2018, but it reported losses from operations of $143.85 million. It has more than 90 million users but so far has only around 100,000 paid customers.

“We are in a growth phase right now and we are continuing to invest, but we expect to hit breakeven cash flow soon,” CFO Shim said.

Slack had about $800 million in total cash, cash-like assets and marketable securities at the end of April and has raised about $1.2 billion so far from private investors, according to data provider PitchBook and the company’s regulatory filing.