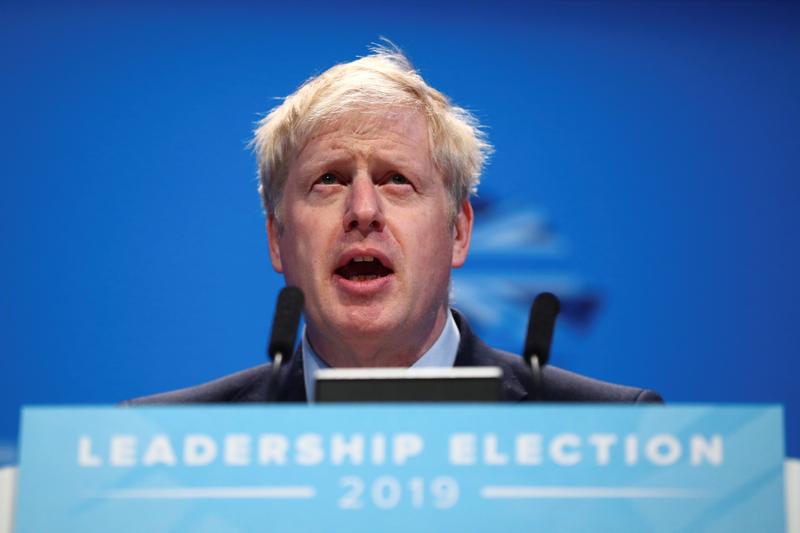 LONDON (Reuters) – Reports of a heated late-night row between Boris Johnson and his girlfriend sparked a debate on Sunday about whether it would hurt his campaign to be Britain’s next prime minister and the front-runner’s suitability for the job.

Polls conducted for the Mail on Sunday newspaper before and after front page reports of the argument showed that Johnson’s lead over rival Jeremy Hunt, the foreign minister, had evaporated amongst all voters and had narrowed among Conservatives.

Johnson declined to answer questions about the incident at a hustings event in Birmingham, in central England, on Saturday, saying that the audience wanted instead to hear about his plans for Britain three years after the country voted to leave the European Union.

International Trade Secretary Liam Fox, who is backing Hunt, agreed the reports should not distract from important policy debate in the race to become the next prime minister which will be decided by 160,000 Conservative party members next month.

“I think it’s always easier to just give an explanation,” he told the BBC’s Andrew Marr on Sunday.

“But the key thing then is how you get on to the issues; what we can’t have is it being a distraction from explanations about wider polices and where we go to and when.”

The clear favourite, Johnson had tried to stay out of the limelight, and opponents have accused him of running from scrutiny to avoid the gaffes that have been a feature of his career so far.

Polling for the Mail on Sunday newspaper showed Johnson was seen as the best prime minister by 36% of all voters on Thursday, while Jeremy Hunt was supported by 28%.

But Johnson had lost the lead on Saturday, with 32% supporting Hunt and 29% Johnson.

Among Conservative voters, Johnson’s lead fell from 55% to 45%, while Hunt’s standing rose from 28% to 34%, the polls conducted by Survation showed.

Police were called to an address in south London where Johnson is living with girlfriend Carrie Symonds in the early hours of Friday morning after neighbours heard a loud altercation. Johnson, 55, is currently divorcing his second wife.

All occupants of the address were spoken to and were all safe and well, police said in a statement.

Johnson supporters have said the action of a neighbour in releasing a recording of the row to the Guardian newspaper was politically motivated.

Neighbour Tom Penn, 29, said in a statement he had called the police because he was “frightened and concerned for the welfare of those involved”.

“Once clear that no one was harmed, I contacted the Guardian, as I felt it was of important public interest,” he said. “I believe it is reasonable for someone who is likely to become our next prime minister to be held accountable for all of their words, actions and behaviours.”

Penn said voted to remain the European Union three years ago, but that was the extent of his involvement in politics.

Johnson, who has a leading Brexit campaigner in the 2016 referendum, on Saturday reiterated his desire to leave the European Union in October with or without a deal.

Hunt, who backed Remain in the referendum, said he would take the country out of the EU without a deal on Oct. 31 if the EU had not showed it was willing to renegotiate the Brexit deal.