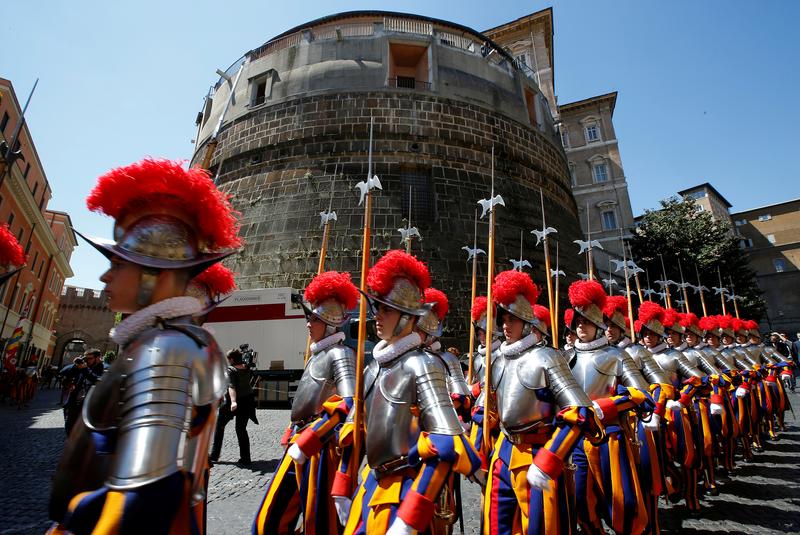 VATICAN CITY (Reuters) – Pope Francis has approved new statutes for the Vatican Bank, making an external audit obligatory and introducing other changes to bolster reforms that have turned around the once scandal-ridden institution.

FILE PHOTO: New recruits of the Vatican’s elite Swiss Guard march in front of the tower of the Institute for Works of Religion (IOR) during the swearing-in ceremony at the Vatican May 6, 2014. REUTERS/Tony Gentile/File Photo

The statutes, approved in a papal document released by the Vatican on Saturday, cap more than six years of changes at the bank since Francis was elected in 2013, since when he has made reform of the bank one of his priorities.

The bank had been caught in previous years in cases of corruption, tax evasion, embezzlement, money laundering and real estate fraud, some involving top officials and prelates, damaging the Vatican’s ethical credentials.

Andrea Tornielli, the Vatican’s editorial director, called the new rules “an important step in the process of adhering to the best international standards.”

Soon after his election, Francis considered closing the bank, formally known as the Institute for Works of Religion (IOR), but decided to continue reforms launched by his predecessor Pope Benedict.

The new statutes make an external audit mandatory. While this has taken place in the past few years, the previous statutes, issued in 1990 by Pope John Paul, called for internal audits.

The new rules ban bank employees, nearly all of whom are non-clerics, from holding consultancies or other roles with outside institutions.

The number of members of the lay board of supervisors, which is made up of internationally known outside financial experts, is increased to seven from five.

This will effectively strengthen the role of the lay board and weaken that of a supervisory commission of cardinals, whose number remains five.

For decades before reforms were implemented, the IOR was embroiled in numerous financial scandals as people with no right to have accounts opened them and used them for illicit purposes with the complicity of corrupt insiders.

In the past six years, hundreds of accounts have been closed at the IOR, whose stated purpose is to manage funds for the Church, Vatican employees, religious institutes, or Catholic charities.

Last year, the Vatican’s controller, the Financial Information Authority (AIF), carried out an on-site inspection of the IOR to ensure it was complying with anti-money laundering legislation and the outcome was “substantially positive”, the AIF said in its report for that year.

In 2017, Italy put the Vatican on its “white list” of states with cooperative financial institutions, ending years of mistrust. The same year, Moneyval, a monitoring body of the Council of Europe, gave Vatican reforms a mostly positive evaluation, particularly those carried out at the bank.