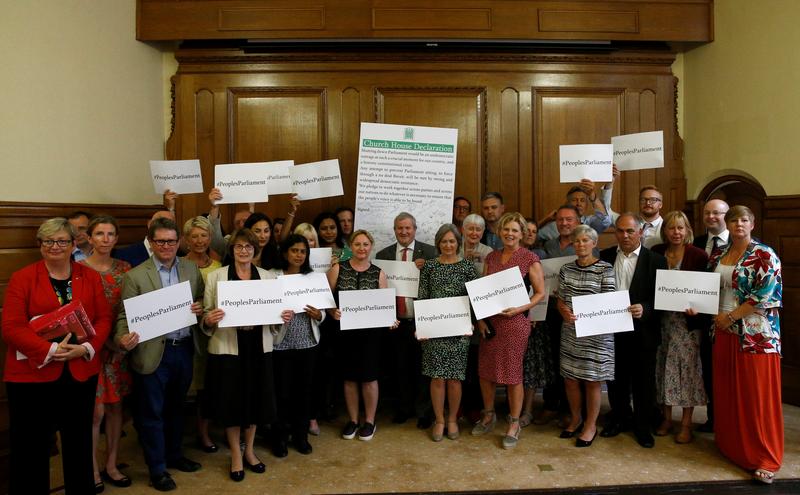 Cross-party MPs hold signs after signing the Church House Declaration after an event about opposing the suspension of parliament to prevent no deal Brexit in London, Britain August 27, 2019. REUTERS/Henry Nicholls

The sticking point is the backstop, an insurance policy to prevent the return of a hard border on the island of Ireland.

Johnson told European Commission President Jean-Claude Juncker on Tuesday there was no prospect of a deal unless the backstop was abolished.

Parliament returns from its summer break next week and is preparing for a battle with Johnson, who has promised to take Britain out of the European Union at the end of October with or without an exit agreement.

Johnson wants the backstop removed from the deal.

Juncker said he was willing to look at any concrete proposals on alternatives to the backstop, as long as they were compatible with the Withdrawal Agreement, according to a readout of the call from the European Commission.

Britain said it was working “at pace to find a wide range of flexible and creative solutions” for the border with Ireland after Brexit, but it said the border discussion should be separate to the withdrawal deal.

“We are ready to negotiate in good faith an alternative to the backstop with provisions to ensure the Irish border issues are dealt with where they should always have been: in the negotiations on the future agreement between the UK and EU,” a government spokeswoman said.

Johnson’s Brexit adviser David Frost is due in Brussels on Wednesday to discuss the backstop with the Commission.

Juncker underlined to Johnson that the EU’s support for Ireland was steadfast and it was very attentive to the country’s interests.

Irish Foreign Minister Simon Coveney said Britain’s proposals did not yet come close to what was needed.

“I think we need to be honest here, that the alternative arrangements that have been discussed to date do not do the same job as the backstop, not even close,” Coveney said in Prague following a meeting with Czech Foreign Minister Tomas Petricek.

“So let’s not pretend that solutions exist when they might not.”