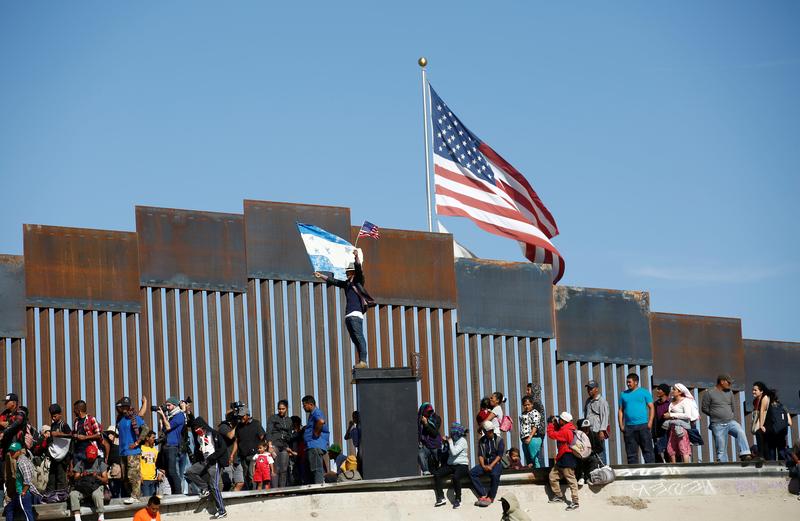 SAN LUIS, Ariz. (Reuters) – A lifelong Republican, Russ Jones supports President Donald Trump and agrees he needs to take action to deal with an immigration crisis on the border with Mexico.

FILE PHOTO: A migrant, part of a caravan of thousands traveling from Central America en route to the United States, holds flags of Honduras and the United States in front of the border wall between the U.S. and Mexico in Tijuana, Mexico November 25, 2018. REUTERS/Kim Kyung-Hoon/File Photo

Jones also has a customs brokerage business to run, however, and says Trump’s lingering threat to impose tariffs on imports from Mexico unless its government stems the flow of Central American migrants across the U.S.-Mexico border is terrible policy.

Trump, infuriated by a surge of illegal immigrants in recent months, had threatened to impose a 5% tariff on Mexican imports starting on Monday, and steadily increase it to 25% in coming months, unless Mexico acted to stop what he describes as an invasion.

On Friday Trump backed down from imposing the tariff, saying Mexico had agreed to help stem the illegal border traffic, but made clear he will go back to the plan if Mexico does not fully cooperate.

As a customshouse broker, Jones, 71, handles the paperwork and logistics for thousands of clients, including Toyota and Sony, who ship merchandise to and from Mexico every day. He runs 10 outlets along the border in California, Arizona and Texas, and has offices in Mexico.

He said the threat of tariffs will hang over businesses that rely on trade with Mexico and likely has cost his customers millions of dollars to finance and prepare for cross-border shipments at a higher tariff rate.

“I don’t know of any of my clients that see the imposition of duties and tariffs on a non-trade issue as a good thing. They are very unhappy about it and it doesn’t matter if they are Democrats or Republicans,” Jones told Reuters at his warehouse in San Luis, just a few hundred yards from the border.

“The use of tariffs just does not make sense.”

Jones’ warehouse was unusually full in the past week as clients stockpiled goods, holding off on sending raw materials to Mexico in case the assembled products would be hit by tariffs on their return to the United States.

There were boxes filled with brake springs for trucks, packaging for Medjool dates, and components for medical devices, all attracting extra storage fees.

Jones’ customers have to pay a bond to cover any fines and fees associated with imported goods and he said they were hit with hefty extra payments last week as the price of those bonds went up in anticipation of tariffs.

U.S. businesses that trade with China already have seen the cost of U.S. customs bonds shoot up in recent months and those working with Mexico fear the same could happen to them.

Jones says unless Trump irrevocably removes the threat of tariffs, he is telling clients to pay the higher price for their customs bonds, in case tariffs are imposed in the future.

“Are we going to be continually dealing with this threat?” he said. “As long as tariffs are a possibility, it’s a shadow over the trading relationship. It’s a sword of Damocles hanging over cross-border trade.”

A THREAT TO JOBS

Jones is not alone among Republican businessmen along the border in believing that Trump’s aggressive use of tariffs over the immigration issue threatens U.S. businesses and jobs.

Jaime Chamberlain runs a food distribution company in Nogales, Arizona, and imports food for U.S. companies including Costco, Walmart and Kroger. He also supports Trump but is upset that he has used tariffs “to negotiate an immigration issue with our No. 1 trading partner.”

Chamberlain said so many customs agents on the border have been diverted from inspecting his clients’ food trucks to dealing with Trump’s efforts to stem illegal immigrants that he has perishable goods waiting for hours at the border.

He also complained that Trump’s erratic policy on border trade is a threat to crucial investment by companies in the United States and Mexico.

“There are billions of dollars of investment and projects on the sidelines on hold, on both sides of the border, because the administration has not given us in the business community the confidence to say we are in a good place,” Chamberlain said.

John Courtis, executive director of the Yuma County Chamber of Commerce, which borders Mexico, was more supportive of Trump, saying that “something had to be done” to stop illegal immigration.

“If I had to pay 5% to protect our sovereignty, I would gladly pay it,” Courtis said, although he added that he was in a minority among business owners in the county who backed Trump’s tariff strategy.

Glenn Hamer, the chief executive of the Arizona Chamber of Commerce, said businesses do not generally like Trump using tariffs as a “tool” but that the deal agreed on Friday with Mexico could bring positive results, including ratification by the U.S. Congress of a renegotiated trade agreement with Mexico and Canada.

While Trump has not withdrawn his threat, Hamer said there is “a general feeling of near euphoria in Arizona that the tariffs are not going to go forward.”