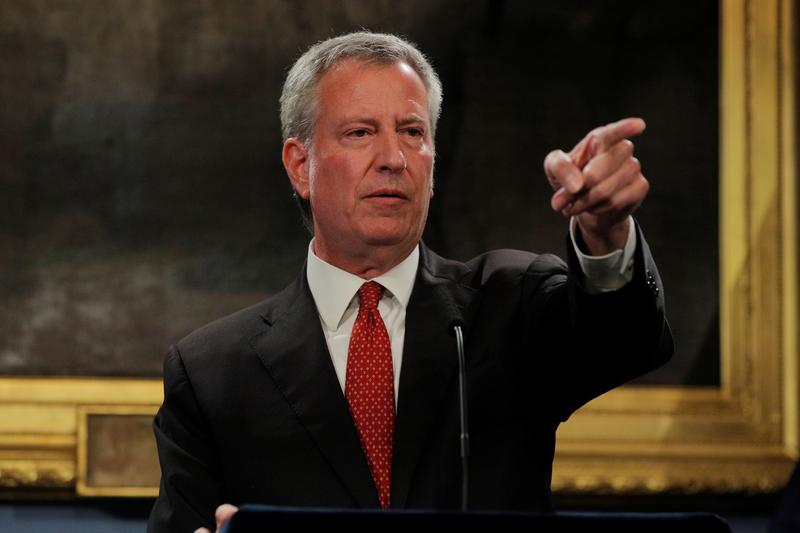 NEW YORK (Reuters) – A white New York City police officer who used a fatal chokehold on an unarmed black man during an arrest in 2014 should be fired, a police department disciplinary judge recommended in a long-awaited verdict on Friday, and the department immediately suspended the officer.

Daniel Pantaleo had been on desk duty since he was seen in widely viewed cellphone videos using a banned chokehold on Eric Garner on a Staten Island sidewalk during an attempted arrest. Police believed Garner was selling loose, untaxed cigarettes.

Garner’s repeated dying cries of “I can’t breathe!” became a rallying cry for the burgeoning Black Lives Matter movement, which protests police brutality around the country.

The police department said in a statement that suspension was standard practice when a departmental judge recommends termination.

Police Commissioner James O’Neill, who will make the final ruling on Pantaleo’s fate, is yet to receive the judge’s report, the statement said. He is expected to follow the recommendation, CNN reported.

Garner’s death, and the slow-moving investigations that followed, have generated some of the most turbulent criticisms of Mayor Bill de Blasio during his tenure and have since spilled over into his presidential campaign. It tested the liberal mayor’s relationships with both civil rights activists and the rank-and-file police officers who work for him.

Rosemarie Maldonado, a deputy police commissioner who oversees disciplinary hearings, reached her verdict after serving as the judge in Pantaleo’s disciplinary trial earlier this year.

“This has been a long battle, five years too long,” Emerald Snipes Garner, one of Garner’s daughters, said at a news conference alongside the civil rights activist Rev. Al Sharpton. “And finally, somebody has said that there is some information that this cop has done something wrong.”

The powerful police labor union, the Police Benevolent Association, condemned the outcome and said the departmental judge had caved to “grandstanding politicians.”

“This decision is pure political insanity,” Patrick Lynch, the union’s president, said in a statement. “If it is allowed to stand, it will paralyze the NYPD for years to come.”

Lynch said if O’Neill went through with firing Pantaleo, “he will lose his police department.”

De Blasio, a Democrat, has faced criticism and protests over continuing to employ Pantaleo as he campaigns to be the Democratic presidential candidate in next year’s national election, with Garner’s relatives and others long demanding Pantaleo be fired.

The mayor has said he regrets his decision to postpone disciplinary proceedings against Pantaleo for what would become several years while a U.S. Justice Department civil rights investigation was ongoing.

He reversed course last year, saying he would no longer wait for the Justice Department, and ordered the police department to begin the internal disciplinary trial. He said it would be unfair for him to weigh in on whether Pantaleo should be disciplined before the trial proceedings had concluded.

The mayor’s office and a lawyer for Pantaleo did not respond to requests for comment.

During that trial, prosecutors from the city’s Civilian Complaint Review Board, an oversight agency, argued that Pantaleo should be fired for using a banned chokehold. Pantaleo’s lawyers argued that Garner himself, not the officer, was to blame for his death, and that Pantaleo followed his training and orders from senior police.

“The evidence the CCRB’s prosecutors brought forth at trial was more than sufficient to prove that Pantaleo is unfit to serve,” CCRB Chairman Fred Davie said in a statement. “Commissioner O’Neill must uphold this verdict and dismiss Pantaleo from the Department, as was recommended by both the CCRB and the Deputy Commissioner of Trials.”

In July, the Justice Department announced it had closed its civil rights investigation without bringing any criminal charges, nearly five years after a grand jury in Staten Island declined to indict Pantaleo on state charges for Garner’s death.