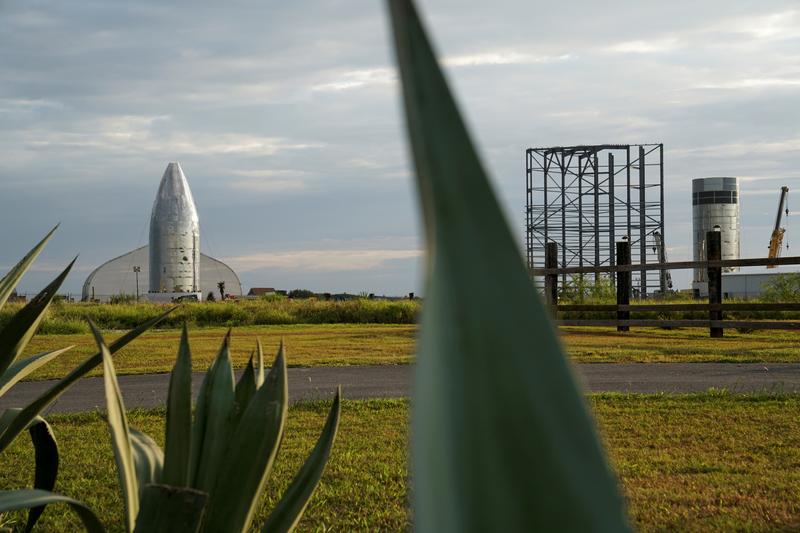 ORLANDO, Fla. (Reuters) – Elon Musk’s SpaceX is expanding its facilities in Florida to make room for the space company’s forthcoming super heavy-lift launch vehicle dubbed Starship, according to a draft of the plans seen by Reuters on Friday.

FILE PHOTO: Starship prototype as seen on the day that SpaceX performs an untethered test of the company’s Raptor engine mounted on a Starhopper rocket at their facility in Boca Chica, near Brownsville, Texas, U.S. July 24, 2019. REUTERS/Veronica G. Cardenas/File Photo

Starship, a 384-foot reusable two-stage rocket taller than the Statue of Liberty, is a central piece of Musk’s interplanetary space travel ambitions as well as U.S. space agency NASA’s goal to send humans to the moon again by 2024.

The Starship rocket is expected to launch up to 24 times a year from SpaceX’s current flagship launchpad 39A, the draft of the company’s environmental assessment said. SpaceX did not specify in the report when it would reach that cadence, but Musk said in September 2018 he wanted to be conducting orbital flights with Starship in two to three years.

SpaceX’s launchpad 39A would support NASA’s future moon missions from the same Kennedy Space Center site used for the Apollo lunar missions a half century ago.

“They’re moving very fast,” said Dale Ketcham, vice president of government relations at Space Florida, the state’s commercial space development agency. “This is actually getting closer to what Elon got into this business for to begin with. This is fundamental infrastructure to get to Mars, the early stages of it.”

SpaceX has also suffered a number of program delays and mishaps over the years on its various space endeavors. In April, one of the company’s Crew Dragon capsules exploded on a test stand, raising fresh scheduling doubts over a flagship NASA astronaut taxi program.

Dozens of U.S.-based space companies have been scrambling to heed NASA’s goal of sending humans back to the lunar surface by 2024, an accelerated timeline set by Vice President Mike Pence in March.

Separately, Boeing Co is developing NASA’s colossal Space Launch System to anchor the agency’s moon-to-Mars Artemis program, though it is years behind schedule.

SpaceX said in its draft environmental assessment that Starship will make return landings on the Air Force landing pad currently used for the company’s Falcon 9 boosters.

The company is also considering a plan to install another landing site at the 39A pad. The first booster stage will land on SpaceX’s unmanned barge some 300 miles off Florida’s coast, the draft said.

This week, NASA said it plans to work with SpaceX to figure out how to land rockets on the lunar surface and develop a refueling station for deeper space exploration.

“Orbital refilling is vital to humanity’s future in space,” Musk tweeted on Thursday. “More likely spacecraft to spacecraft (as aircraft do aerial refueling), than a dedicated depot, at least at first.