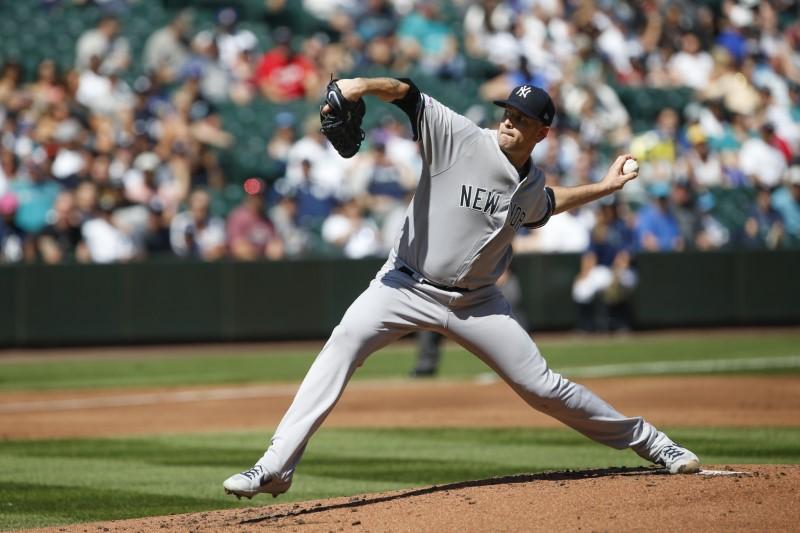 James Paxton and three relievers combined on a three-hitter, Aaron Judge continued his tear by hitting a two-run homer in the fifth inning, and the New York Yankees ended their nine-game West Coast road trip with a 7-3 victory over the Seattle Mariners on Wednesday afternoon.

The Yankees, who hit four homers in the game, ended their trip at 5-4. They won the final four games and five of the last six after starting the trip with three straight losses in Oakland last week. New York swept three games in Seattle.

Judge’s homer was fifth in six games and sixth on the trip. Gary Sanchez reached 30 homers for the second time in his career while Mike Ford and DJ LeMahieu also homered as the Yankees ended the trip with 18 homers in the last six games.

Jake Marisnick capped a three-run seventh inning by scoring on a throwing error as host Houston rallied past Tampa Bay.

The Astros scored three times in the seventh off Diego Castillo (2-8), erasing a 4-3 deficit and taking Gerrit Cole off the hook for what would have been his first loss since late May.

Cole matched his season high with 14 strikeouts and set a franchise record with his 15th double-digit strikeout game of 2019, eclipsing the mark set by J.R. Richard in 1978 and matched by Richard the following campaign. But Cole surrendered four runs on six hits over 6 2/3 innings after allowing just six earned runs over his previous six starts combined.

Enrique Hernandez scored on a two-out throwing error by San Diego shortstop Luis Urias, leading visiting Los Angeles to a win in the rubber match of a three-game series.

Hernandez drew a two-out walk from Kirby Yates (0-5) and stole second. Russell Martin then hit a one-hop rocket to Urias, who made a nice stop on the ball. However, the throw to first sailed over the head of Eric Hosmer, allowing Hernandez to race home. The error was the rookie infielder’s fifth in the past eight games.

Hiura delivered an RBI groundout, a solo home run and a run-scoring double as the Brewers snapped the Cardinals’ six-game winning streak and moved back to within 5 1/2 games of National League Central-leading St. Louis, which fell for just the fourth time in the past 19 games.

Brewers starter Jordan Lyles (9-8) allowed just one run while striking out nine batters in 5 1/3 innings. He gave up six hits and walked one to improve to 4-1 in with a 2.51 ERA six starts since arriving in a trade with the Pittsburgh Pirates.

Schoop drilled his second home run of the series in the second inning, connecting for a three-run shot that gave him 20 homers this season. The blast allowed the Twins to tie a major league record, giving them seven players with at least 20 home runs.

Jason Kipnis hit a pair of solo homers, Francisco Lindor hit a go-ahead shot, and Cleveland continued its dominance over Detroit with a road victory.

Lindor broke a 2-2 tie in the eighth inning off Buck Farmer (5-5) with his 24th homer. Lindor had three hits and scored two runs. Carlos Santana added two hits and an RBI for Cleveland, which has defeated the Tigers in 14 of 15 games this season.

Rookie Aaron Civale (2-3) limited the Tigers to two runs on six hits in seven innings, with no walks and five strikeouts. Both of his career victories have come against Detroit. Brad Hand notched his 32nd save by pitching a 1-2-3 ninth inning.

The Cubs have won the first two games of the three-game set to open a four-game lead over the Mets in the race for the NL’s second wild-card spot. New York has lost five straight.

Kyle Schwarber and Nicholas Castellanos also homered for the Cubs. Mets starter Noah Syndergaard allowed 10 runs (nine earned) on nine hits in three innings. He is the first Mets pitcher since Johan Santana on May 2, 2010, to give up 10 runs in a start.

Hunter Dozier capped a three-RBI performance with a tiebreaking single in the seventh inning to send Kansas City past visiting Oakland.

Thanks to homers by Marcus Semien and Mark Canha, the A’s held leads of 2-0 and 4-2 but the Royals were the only team to score over the final 4 1/2 innings to get the win.

Matt Joyce and Freddie Freeman each homered and were among four Atlanta players with two RBIs as the Braves pulled away from host Toronto.

Braves starter Mike Foltynewicz allowed three runs (two earned), eight hits and two walks in 4 2/3 innings and did not qualify for the win as the teams split a two-game set. Reliever Luke Jackson (8-2) allowed two hits and a run in 1 1/3 innings to pick up the win.

Washington’s Max Scherzer, in just his second start since coming off the injured list after recovering from problems with his upper back and shoulder, was pulled after 4 1/3 innings. He gave up two runs on six hits and struck out eight with one walk.

Wander Suero (5-7), who followed Scherzer to the mound, faced one batter and got the win. Baltimore starter Asher Wojciechowski (2-7) went four innings, giving up six hits and five runs. He struck out three and didn’t walk a batter.

After failing to hold a 7-0 lead in his last start, Philadelphia pitcher Vince Velasquez (6-7) gave up two runs in five innings while the Phillies offense scored five times in the fifth inning and cruised past visiting Pittsburgh.

J.T. Realmuto went 3-for-5 with a home run and a triple, and Corey Dickerson added a homer for the Phillies. Cesar Hernandez notched three hits and three RBIs, and Bryce Harper contributed two hits and scored three times in Philadelphia’s 17-hit attack.

Rhys Hoskins broke out of a 7-for-71 (.099) slump with a triple in the second, then stroked an RBI double in the third for his first two-hit game since July 24. All eight starting position players for the Phillies recorded an RBI.

J.D. Martinez and Rafael Devers also homered, and Rodriguez (16-5) extended his scoreless streak to 20 innings before giving up his first run in three starts. Boston moved within five games of the second AL wild-card position.

Brandon Workman struck out all three batters he faced in the ninth for his ninth save of the season. Colorado’s Charlie Blackmon and manager Bud Black were ejected by plate umpire Jerry Meals for arguing a called third strike that produced the first out of the inning.

Anthony DeSclafani pitched seven scoreless innings against his former team, leading visiting Cincinnati to a shutout win in Miami and putting the Reds one win from a four-game sweep.

DeSclafani (9-7) allowed just two hits — both singles — and one walk while striking out eight batters. He is one win away from the first double-figure-victory season of his career, although this is the third time in five years that he has reached nine victories.

DeSclafani was backed by Aristides Aquino, who went 2-for-4 with three RBIs, a homer and a double. Eugenio Suarez was another Reds hitting star, going 2-for-4 with a homer. He leads Cincinnati with 38 homers and has gone deep in four consecutive games.

Jurado (7-10) entered to begin the second inning after opener Emmanuel Clase narrowly avoided damage in the first inning. Jurado gave up just two hits — a fourth-inning double by Kole Calhoun and a seventh-inning single by Calhoun — on 66 pitches, striking one and walking one.

The Angels were without Mike Trout, who was out with a sore right foot. Trout is expected back in the lineup on Friday following the team’s day off.