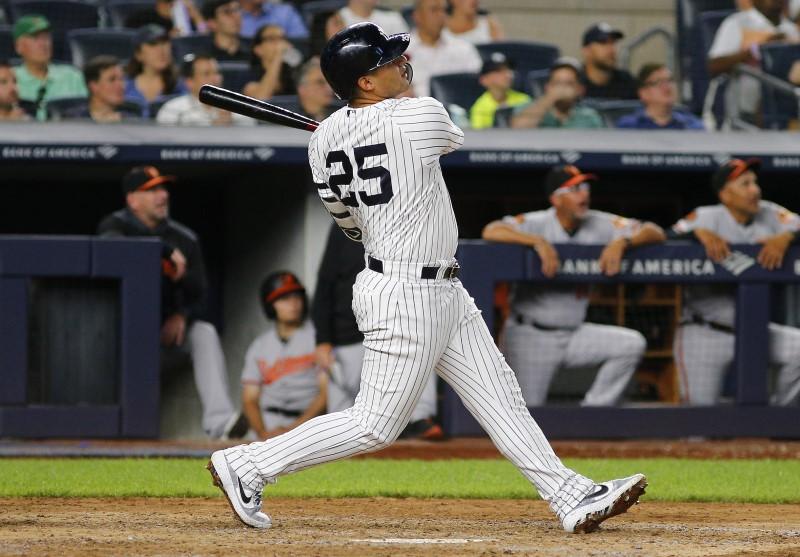 Gleyber Torres hit two more homers off the Baltimore Orioles, and the New York Yankees recorded an 11-8 victory to complete a sweep of a day-night doubleheader Monday at Yankee Stadium.

The Yankees won their 14th straight meeting with the Orioles and lead the season series 15-2. With three homers in Game 2, they have 59 against Baltimore this season, extending the major league record for homers against an opponent in a season.

After a solo drive in New York’s 8-5 win in the opener, Torres slugged three-run homers in consecutive at-bats off Evan Phillips and Tom Eshelman in the nightcap.

Gio Urshela and Cameron Maybin hit solo homers as the Yankees won for the 11th time in 13 games by hitting all four homers off Baltimore starter Gabriel Ynoa (1-7).

New York left-hander James Paxton (8-6) won his third straight start, allowing three runs on five hits in six innings. He gave up solo homers to Trey Mancini and Anthony Santander on 0-2 pitches on a day in which he struck out seven and walked two.

Carlos Santana played hero yet again with a game-winning home run in the bottom of the ninth inning to lead host Cleveland past Boston.

Santana, who hit a tiebreaking grand slam in the 10th inning at Minnesota on Sunday, took Marcus Walden (7-2) deep to center field leading off the ninth. The blast gave the Indians sole possession of first place in the American League Central while the Twins were idle.

The win was Cleveland’s 22nd in 31 games since the All-Star break. Boston dropped its third straight and fell for the 12th time in the past 15.

Danny Jansen added a two-run home run, and Bo Bichette had four hits and three runs for the Blue Jays in the opener of a three-game series. Drury extended his hitting streak to nine games. Smoak, Grichuk and Jansen each had three hits.

Matt Adams launched a two-run homer, and Gerardo Parra had an RBI single for the Nationals, who have won five of their last seven games.

Rookie Aristides Aquino celebrated being named the National League Player of the Week by belting a two-run homer in the eighth inning for the Reds. It was Aquino’s eighth homer in 12 career games, which set a major league record.

Nick Ahmed hit one of three home runs in the sixth inning and drove in four runs, and Arizona beat Colorado in Denver.

Jake Lamb and Carson Kelly also went deep in the four-run sixth inning, and Josh Rojas had two hits and an RBI in his major league debut for the Diamondbacks.

Merrill Kelly (8-12) survived a rough start to go five innings and get his first win since June 12. He allowed six runs on nine hits and two walks with five strikeouts.

The game between Chicago and visiting Houston was postponed because of inclement weather and will be made up as part of a straight doubleheader Tuesday.