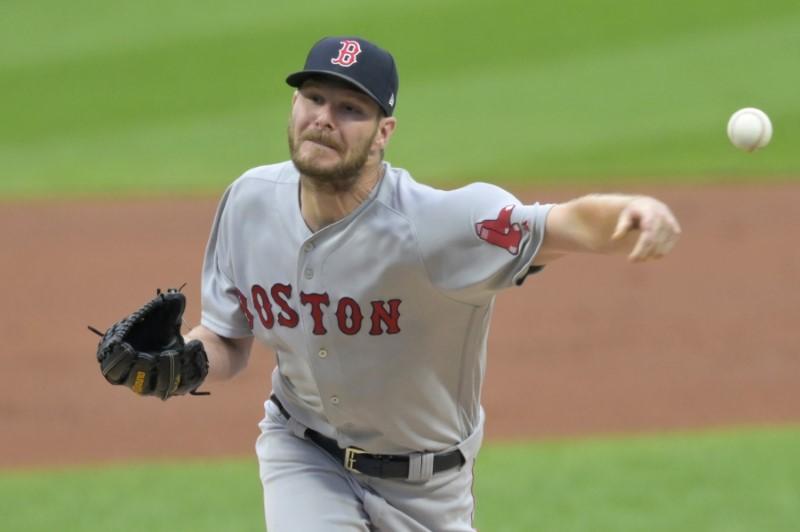 Sale met with Dr. James Andrews in Florida on Monday, and the noted orthopedic surgeon confirmed the prior diagnosis, Passan reported, adding the left-hander “is expected to avoid Tommy John surgery.”

The Red Sox later confirmed the diagnosis in a statement and noted that Sale was treated with a platelet-rich plasma injection. “Dr. Andrews also recommended a period of shutdown from throwing. Sale will be re-evaluated in six weeks by Dr. Andrews,” said Boston’s president of baseball operations, Dave Dombrowski.

The 30-year-old Sale reported soreness in his elbow after his start on Wednesday against Cleveland, in which he struck out 12 Indians in 6 2/3 innings. A subsequent MRI exam could not rule out damage to his ulnar collateral ligament, which typically results in the surgery, so the pitcher visited Andrews for a second opinion.

The 39-year-old Cruz missed nine games after sustaining a left wrist strain on Aug. 8 in a loss to the Indians.

He missed 19 games earlier this season after injuring the same wrist on a swing in a May 12 game against the Detroit Tigers. Cruz is hitting .294 with 19 doubles, 32 home runs and 76 RBIs in 87 games.

—The Atlanta Braves claimed outfielder Billy Hamilton off waivers from the Kansas City Royals, the team announced. The Royals designated the struggling Hamilton for assignment on Friday.

Atlanta made the move after learning outfielder Ender Inciarte will likely miss more than a month due to the hamstring injury he suffered on Friday. Inciarte is batting .246 with five homers and 24 RBIs in 65 games.

—Pitcher Al Jackson, an original member of the New York Mets, has died after a long illness. He was 83.

After breaking into the big leagues with the Pittsburgh Pirates in 1959, Jackson joined the Mets in 1962 after being the 22nd pick in the 1961 expansion draft. As New York struggled to a 40-120 record in its debut campaign in 1962, Jackson tied for second on the staff with eight wins and tied for the team lead with 118 strikeouts. He lost 20 games that season.

Three games kick things off on Feb. 21, with all 30 Cactus and Grapefruit League teams in action on Feb. 22. Notable games on the schedule include the Feb. 22 opening of CoolToday Park, the new spring home of the Braves in North Port, Fla., with the Braves hosting the Baltimore Orioles.

March 23 will mark the debut of Globe Life Field, the new home ballpark for the Texas Rangers, with the St. Louis Cardinals visiting Arlington, Texas.

—Nationals starter Joe Ross left Washington’s game at Pittsburgh in the fourth inning after getting hit in the right leg by a comebacker. Pirates slugger Josh Bell’s grounder struck Ross.