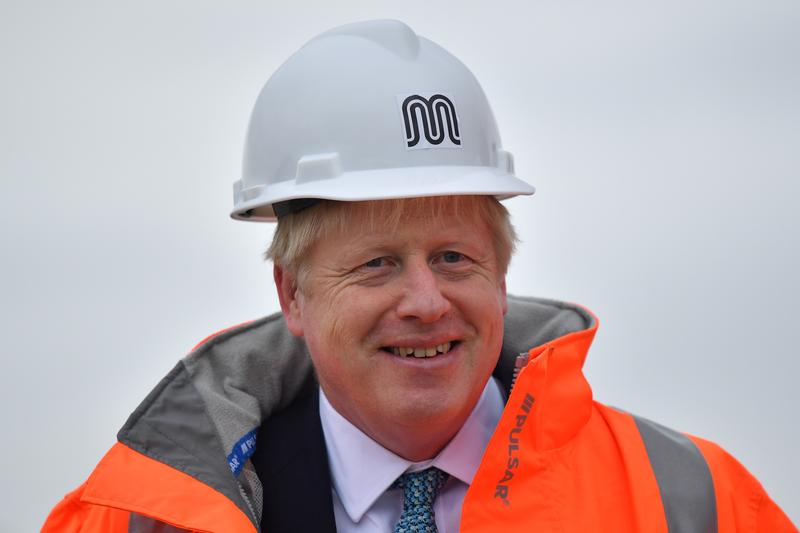 MANCHESTER, England (Reuters) – British Prime Minister Boris Johnson cautioned the European Union on Saturday that the “anti-democratic” Irish backstop must be ditched if they were to strike a Brexit divorce deal.

Johnson, since taking office on Wednesday, has repeatedly said that if the EU continues to refuse to renegotiate the Withdrawal Agreement agreed by his predecessor Theresa May, then he will take Britain out on Oct. 31 without a deal.

His biggest demand is that the most hotly-contested element of the Brexit divorce agreement, the Irish border backstop, be struck out of the Withdrawal Agreement, a demand that has angered Ireland and perturbed other EU capitals.

“If we get rid of the backstop, whole and entire, then we are making a lot of progress,” Johnson said, when asked if it was only the Irish border backstop that he wanted changed.

Speaking before a Stephenson’s Rocket, a 19th century steam locomotive, in the northern England city of Manchester, Johnson dedicated most of his speech to improving public services, transport and the internet and driving up economic growth.

“Our post-industrial towns have a proud, great heritage but an even greater future. Their best years lie ahead of them,” he said, announcing new long-term rail links and promising immediate improvements to bus services.

That message, aimed at what Johnson called “left behind” towns, is seen as the early stages of an election campaign, even though Britain is not due a parliamentary election until 2022 and Johnson is adamant he will not hold one before Brexit.

His Conservative Party does not have a majority in parliament, is divided over how to deliver Brexit and under threat of a no-confidence vote when parliament returns in September.

European leaders are prepared to talk with Britain’s new leader over Brexit but have so far insisted they will not reopen the Withdrawal Agreement. Many EU diplomats think the United Kingdom will hold a snap election soon.

Johnson, who discussed Brexit with U.S. President Donald Trump on Friday, brushed aside those concerns.

“My friends, I do not want a no-deal Brexit, that is not where we’re aiming, but we have to face the fact that at the moment we’re being told, as we have been told for the last three year ‘rien ne va plus’ – ‘the deal is fixed’ – and can’t be changed. I doubt that,” he said.

The backstop is an insurance policy designed to prevent the return of border controls along the 500-km (300-mile) land border between Ireland and Britain’s province of Northern Ireland that were ended by the 1998 Good Friday peace agreement.

Irish Prime Minister Leo Varadkar said the question of the unification of Ireland and Northern Ireland would inevitably arise if Britain leaves the EU without a divorce deal on Oct. 31.

“The approach of the UK government is not going to be disengaged or aloof or waiting for them to come to us: we are going to try to solve this problem and we are going to do it in a spirit of friendship and cooperation,” Johnson said.

“But we can’t do it as long as that anti-democratic backstop, that backstop that seeks to divide our country, divide the UK, remains in place,” he said. “We need to get it out and then we can make progress, I think.”

Britain’s Prime Minister Boris Johnson reacts as he meets engineering graduates on the site of an under-construction tramline in Stretford, near Manchester, Britain July 27, 2019. Ben Stansall/Pool via REUTERS

The Withdrawal Agreement that May struck in November with the EU says the United Kingdom will remain in a customs union “unless and until” alternative arrangements are found to avoid a hard border.

Many British lawmakers oppose the prospect of being bound to EU rules and customs duties that would prevent Britain doing its own trade deals and leave it overseen by EU judges.