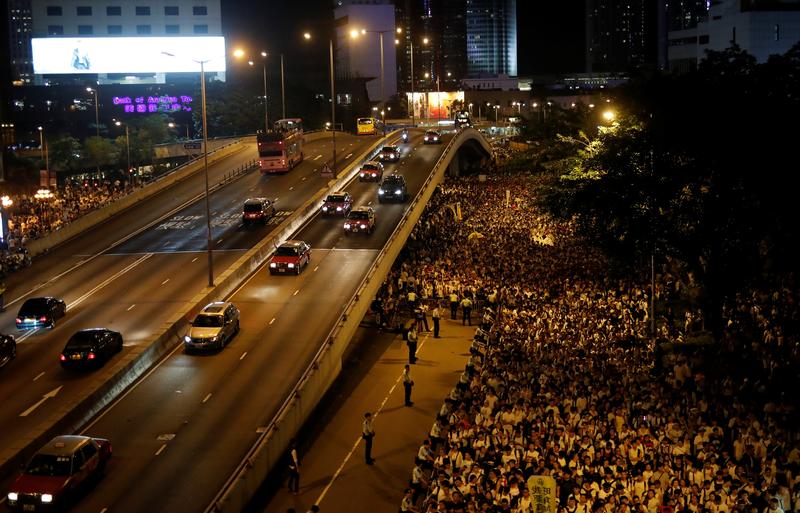 HONG KONG (Reuters) – Hong Kong was plunged into a fresh political crisis on Sunday night after hundreds of thousands of people took to the streets to thwart a proposed extradition law that would allow suspects to be sent to mainland China to face trial.

After seven hours of marching, organizers estimated 1,030,000 people took part, far outstripping a demonstration in 2003 when half that number hit the streets to successfully challenge government plans for tighter national security laws.

A police spokesman said police estimated 240,000 were on the march “at its peak”.

Sunday’s outpouring was already raising the pressure on the administration of Hong Kong Chief Executive Carrie Lam and her official backers in Beijing.

“She has to withdraw the bill and resign,” veteran Democratic Party lawmaker James To told crowds gathering outside the city’s parliament and government headquarters in the Admiralty business district on Sunday night.

“The whole of Hong Kong is against her.”

After To spoke, thousands were still arriving, having started the march five hours earlier, filling four lanes of a major thoroughfare.

Some sat in a nearby park singing “hallelujah”, but on a nearby road tensions were building after hours of peaceful protest.

Riot police armed with batons and helmets were gathering while government-funded broadcaster RTHK reported that they used pepper spray on six masked men trying to block the road.

Lam had yet to comment on the rally and the future of the bill, which is due to be debated in the Legislative Council on Wednesday and could be passed into law by the end of June.

Lam has tweaked the amendments but refused to pull the bill, saying it is vital to plug a long-standing “loophole”.

The demonstration capped weeks of growing outrage in the business, diplomatic and legal communities, which fear corrosion of Hong Kong’s legal autonomy and the difficulty of ensuring basic judicial protections in mainland China.

U.S. and European officials have issued formal warnings – concern matched by international business and human rights lobbies that fear the changes would dent Hong Kong’s rule of law. The former British colony was handed back to Chinese rule in 1997 amid guarantees of autonomy and various freedoms including a separate legal system, which many diplomats and business leaders believe is the city’s strongest remaining asset.

The unusually broad opposition to the rendition bill displayed on Sunday came amid a series of government moves to deepen links between southern mainland China and Hong Kong.

Chants of “no China extradition, no evil law” echoed through the highrise city streets as marchers snaked through the Causeway Bay and Wanchai shopping districts, while marchers called for Lam and other senior officials to step down.

Some carried yellow umbrellas – a symbol of the pro-democracy Occupy protests that choked key city streets for 79 days in 2014.

The genial crowd included young families pushing babies in prams as well as the elderly braving 32 degree C (90°F) heat, some spraying each other with water misters.

Opposition to the bill has united a broad range of the community, from usually pro-establishment business people and lawyers to students, pro-democracy figures and religious groups.

Insurance agents, executives and small entrepreneurs joined bus drivers and mechanics in the streets on Sunday. Dozens of people told Reuters it was their first protest march, with some remarking on the strong sense of unity among the diverse crowds.

“I come here to fight,” said a wheelchair-bound, 78-year-old man surnamed Lai, who was among the first to arrive.

Schoolteacher Garry Chiu joined the protest with his wife and 1-year-old daughter, saying, “It is no longer about me.”

“I need to save my daughter. If the law is implemented anyone can disappear from Hong Kong. No one will get justice in China. We know there are no human rights,” Chiu added.

“The extradition bill will directly threaten the core values of Hong Kong and rule of law,” said 21-year-old Kelvin Tam, a student in London. “It will remove the firewall of Hong Kong judicial independence.”

Protests against the bill were also planned on Sunday in 26 cities globally, including London, Sydney, New York and Chicago.

The amendments would simplify case-by-case arrangements to allow extradition of wanted suspects to jurisdictions, including mainland China, Macau and Taiwan, beyond the 20 with which Hong Kong already has extradition treaties.

Opponents of the bill question the fairness and transparency of the Chinese court system and worry about Chinese security forces contriving charges.

Foreign governments have also expressed concern, warning of the impact on Hong Kong’s reputation as an international financial hub, and noting that foreigners wanted in China risk getting ensnared in Hong Kong.

Concerns were highlighted on Saturday with news that a local high court judge had been reprimanded by the chief justice after his signature appeared on a public petition against the bill.

Reuters reported earlier that several senior Hong Kong judges were worried about the changes, noting a lack of trust in mainland courts as well as the limited nature of extradition hearings.

They say the laws carry adequate safeguards, including the protection of independent local judges who will hear cases before any approval by the Hong Kong chief executive. No one would be extradited if they face political or religious persecution or torture, or the death penalty, they say.

“We continue to listen to a wide cross-section of views and opinions and remain to open to suggestions on ways to improve the new regime,” a government official said on Sunday.