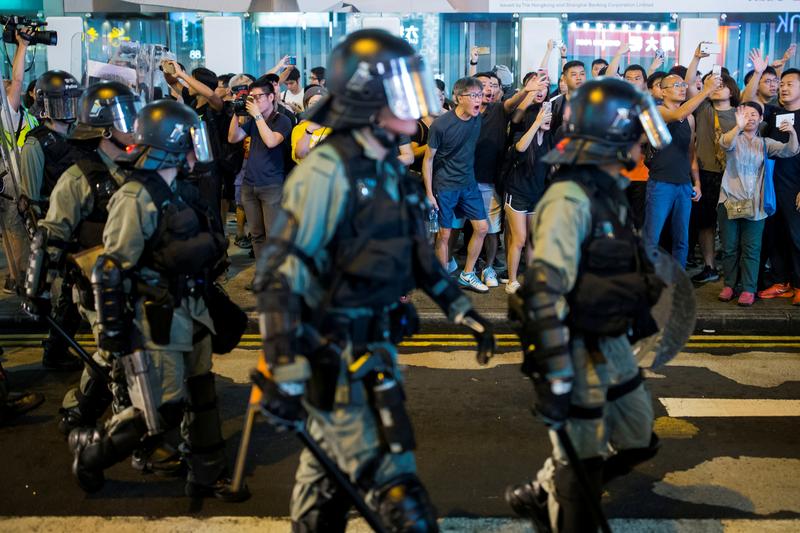 HONG KONG (Reuters) – Pun sees himself as a peaceful, middle-class Hong Kong student. Yet since the beginning of June, he has been building barricades and throwing bricks at police, risking his own liberty to fight, as he sees it, for the city’s freedoms.

In one of the world’s safest cities, the idea of violence as a legitimate form of political expression – hand-in-hand with peaceful protest – is becoming increasingly mainstream in the evolving tactics of a decentralized pro-democracy movement that has disrupted Chinese-ruled Hong Kong for 11 weeks.

“I know violence cannot fight violence, but sometimes aggression is needed to attract the attention of the government and others,” 22-year-old Pun said last week, speaking at the city’s airport after overnight clashes with police.

“I have thrown rocks, I have acted as a shield with umbrellas for others, I have been helping to build barricades, to bring supplies, to take injured people to a safe zone. I have also been hit by police with batons. We’re all slowly getting used to this. We have to.”

Protests in the former British colony erupted in early June over a now-suspended bill that would have allowed criminal suspects to be extradited to mainland China for trial.

But the unrest has been fueled by broader worries about what many say has been an erosion of freedoms guaranteed under the “one country, two systems” formula put in place when Hong Kong returned to China in 1997.

Unlike the Umbrella movement in 2014, when a largely peaceful 79-day occupation of Hong Kong’s financial area failed to achieve its aim of universal suffrage, a more confrontational stance from some of the protesters was evident from the start.

They came equipped with helmets, masks and goggles, and well-studied plans for supplying the protest frontlines with gear and mitigating the effects of tear gas.

And it seemed to yield some results. Within days, Hong Kong leader Carrie Lam, while not formally withdrawing the extradition bill, as protesters demanded, suspended the measure and declared it “dead”, a word she repeated on Tuesday.

Emboldened, the protest movement has since morphed into a broader, increasingly creative and sophisticated push for greater democracy, posing the biggest political challenge yet for Chinese President Xi Jinping.

Protesters escalated their aggressiveness, playing cat-and-mouse with the police all over the territory. While a giant march on Sunday was peaceful, activists have not ruled out further violence.

“We learned a lot from our mistakes in the Umbrella revolution,” said Pun, wearing a new set of clothes after ditching in an airport washroom the all-black protest attire he had worn the night before.

“Definitely more people accept there will be some violence now. They may not like it, they may not want to be a part of it, but they don’t condemn us. We are joined together as a force.”

There is also discipline in the mayhem.

Passers-by are often offered helmets and masks and shielded with umbrellas until they reach a safe place. Ambulances and fire trucks are accommodated. Apart from a few isolated incidents, private property has been spared.

During one protest in the Wan Chai nightlife district, couples with children casually crossed barricaded roads filled with protesters. Drinkers finished their pints and cigarettes outside even as tear gas lingered in the air. Filipino domestic helpers had a picnic on an overpass.

“The protests here are quite cute compared with Berlin or Paris,” Robert, a 40-year-old French air traffic controller, said over a beer.

Maintaining some courtesy and safety ensures the radical faction of the movement retains the support of peaceful protesters.

Researchers say one of the factors contributing to “Umbrella’s” demise was the acrimony among protest leaders between old-guard legislators advocating a peaceful, long-term plan of building public pressure and the more confrontational faction led by students such as young, bespectacled Joshua Wong.

This time, a decentralized protest movement has allowed each faction to follow their own strategy.

Last Sunday, dozens of non-frontline protesters interviewed by Reuters said they “accepted,” “supported”, or “disagreed with” the violence. But almost all said they would not condemn the violent protesters.

“Everyone has their own way of doing things, it’s result-oriented. I accept it,” said Galen Ho, 38, who was marching with his wife and 7-year-old son. Ho, who works in retail, said he leaves demonstrations before they turn violent.

A study by researchers from several Hong Kong universities conducted through 12 on-site surveys during protests from June 9 to Aug. 4, found that: “most of the participants agreed that ‘the maximum impact could only be achieved when peaceful assembly and confrontational actions work together’.”

It also found the extent to which protesters agreed or strongly agreed with the saying “the use of violence by protesters is understandable when the government fails to listen” increased from 69% to more than 90% over the summer.

Only around 1% disagreed or strongly disagreed, down from 12.5% in June.

“We’re not the goodie-goodie Hong Kongers anymore,” said 23-year-old Iris, after helping tie up metal railings with plastic straps to build barricades in a brief protest in the Tai Wai working class neighborhood.

“It’s the government who pushed us to this path. We didn’t want to. Who doesn’t want to live stably, have three meals and stay home peacefully and just earn an income?”

But it works both ways.

On Sunday, when a group of protesters shouted expletives near a police station, one man reminded them the demonstration – which drew 1.7 million according to organizers – had to remain peaceful on the day. They backed off swiftly.

“It’s our way of showing support to the peaceful ones in return for the support they’ve been showing us,” said Victor, 26, wearing a black mask covering all but his eyes, a black helmet, knee pads and arm guards.

On Tuesday, chief executive Lam moved another inch, saying a task force will look into complaints about police behavior during the protests, though failing to address a core demand of the protesters for an independent inquiry.

Amanda Tattersall, a researcher at the University of Sydney, who has been studying Hong Kong protests for three years, said the movement’s peaceful majority and the confrontational group have been “co-dependent” from the beginning of the summer.

That ensured violence is used for tactical purposes, rather than to simply create chaos.

“The movement is pretty disciplined about the extent to which it engages in, and the boundaries it sets for, quote-unquote, violence,” Tattersall said.