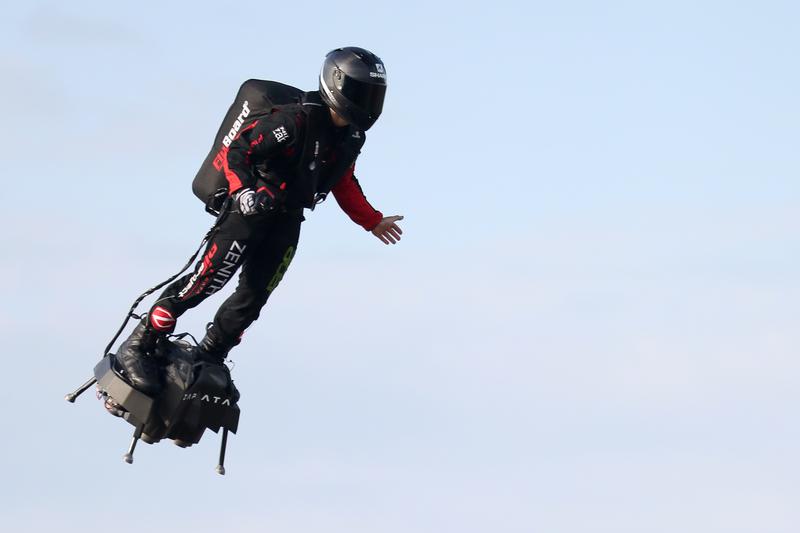 French inventor Franky Zapata takes off on a Flyboard for a second attempt to cross the English channel from Sangatte to Dover, in Sangatte, France, August 4, 2019. REUTERS/Yves Herman

SANGATTE, Paris (Reuters) – French inventor Franky Zapata on Sunday succeeded in crossing the English Channel on a jet-powered hoverboard he designed, after a previous ended with him falling into the sea.

Standing on a platform powered by five small jet engines and carrying kerosene in a backpack, Zapata took off from Sangatte, just outside Calais in France at about 0617 GMT, trailed by three helicopters.

He reached Britain just over 20 minutes later, waving to onlookers before landing safely in Saint Margaret’s Bay, close to Dover on Britain’s southern coast, according to French television images.

“For the last five to six kilometers I just really enjoyed it,” Zapata told reporters on arrival. “Whether this is a historic event or not, I’m not the one to decide that, time will tell.”

“We made a machine three years ago…and now we’ve crossed the Channel, it’s crazy,” he said, before breaking into tears.

Zapata’s biggest challenge was refueling with another backpack halfway through the 35-km journey across the Strait of Dover, which required landing on a platform mounted on a boat.

On his first attempt to make the crossing on July 25, Zapata was knocked off balance in the process and fell. The inventor used a bigger boat and platform this time.

Zapata, who wowed crowds during France’s Bastille Day celebrations on July 14 by soaring over a military parade in Paris on the device, said on arrival that the hoverboard had reached speeds of 160 to 170 km per hour during the crossing.