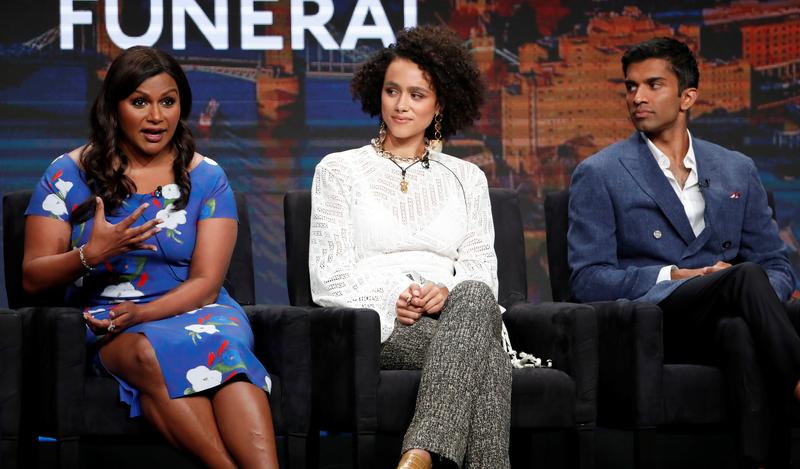 That was the challenge for the makers of a new TV series that puts a 21st-century twist on the 1994 British romantic comedy that made the fumbling, quintessentially English Grant an international star.

So they decided to center the 10-episode series for Hulu on American characters with British connections and chose a multiracial cast.

“One thing I didn’t want to do was have a floppy-haired British guy,” series co-creator Mindy Kaling said, referring to Grant.

“There are other ways of being really sexy,” Kaling told reporters on Friday at a Television Critics Association meeting.

The TV series, also called “Four Weddings and a Funeral” will launch on Hulu on July 31.

Kaling, best known as a co-star and a writer on the U.S. version of “The Office,” said that re-imagining the beloved British film was daunting.

“It’s terrifying, because we all love the movie so much,” said Kaling, also known for creating and starring in “The Mindy Project.”

Then the idea for a number of “gentle subversions” came to her, including depicting “a love story between an African-American woman and a British-Pakistani guy.”

In addition, she said she had never seen a film “where a British-Pakistani and an African-American are best friends at work – and they work in finance,” she added.

“The fact that the characters do not seem to have these racial boundaries. … was really refreshing,” said Kaling, an American of South Asian heritage.

The “Four Weddings and a Funeral” movie followed the ups and downs of an all-white group of close British friends as they search for, miss out on, and lose love. It brought Grant a Golden Globe and launched a series of romantic comedies written by Richard Curtis.

The Hulu TV series was shot in London with the cooperation of Curtis. It also incorporates nods to famous scenes from other Curtis movies, including “Love Actually” and “Notting Hill,” both of which starred Grant.

Andie MacDowell, who starred in the original film, also makes an appearance in the Hulu series – this time as the overbearing Texan mother of one of the posh British women.

“We just wanted to fill the show with Curtis film moments,” said Tracey Wigfield, one of the executive producers.