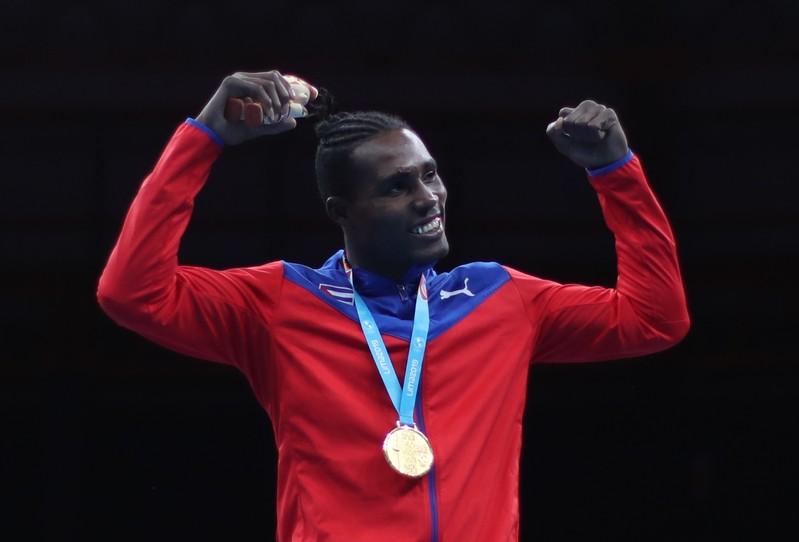 LIMA (Reuters) – Cuba landed the golden punch in the Pan Am Games boxing ring on Thursday, rolling out a lineup of Olympic and world champions to fight their way up the medal table.

Of the five men’s gold medal bouts on Thursday’s card, Cuba had fighters in all of them and, led by stylish light heavyweight Julio Cesar La Cruz, grabbed four golds and a silver.

Cuba started the night with six golds but finished on 10, vaulting over Argentina and Colombia into fifth place on the medal table, with more titles likely to come with four boxers going for gold on Friday.

The only men’s bout at the Pan Am competition not to feature a Cuban in the final is Friday’s light flyweight contest, where Colombia’s Yuberjen Martinez Rivas will face Puerto Rico’s Oscar Collazo for the gold.

There are few sports Cubans are more passionate about than boxing. The country’s fighters are heroes and their achievements a source of immense national pride.

That is the burden every Cuban boxer carries into the ring with them.

“We are the best in the world,” said lightweight champion Lazaro Alvarez, who like many Cuban fighters dedicated his medal to Fidel Castro and the people of the island nation.

“We are always ready to do our best. I feel a lot of pressure because you are always preparing to compete and you don’t know if can go wrong.

“There is a lot of tradition in Cuba, we have a lot of champions and the next generation want to become boxing champions.”

But Alvarez, a three-time world champion, quickly had Cuba in charge with a no-nonsense win over another Dominican Leonel de los Santos Nunez in the lightweight (60kg) final to earn his third consecutive Pan Am gold.

Roniel Iglesias, gold medalist at the 2010 London Olympics, followed with a narrow decision over the Dominican Republic’s Rohan Polanco Emiliano in the welterweight (69kg) title bout.

Then Cruz, the four-time world champion and gold medal winner at the Rio Olympics, took to the ring and breezed past Brazilian Marley Machado, walking off to a standing ovation wrapped in the Cuban flag.

Cuba’s continuing domination in the ring stood in stark contrast to the decline of their northern neighbors the United States.

Once a boxing powerhouse, the Americans had not one single man in the ring at Villa Deportiva Regional del Callao as the titles were decided on Thursday, although Oshae Jones took the women’s welterweight (69kg) crown.

After the decision was announced, Jones celebrated with a series of dances in the center of the ring that drew howls and chants of “CAN-A-DA! CAN-A-DA!” from an unimpressed crowd.