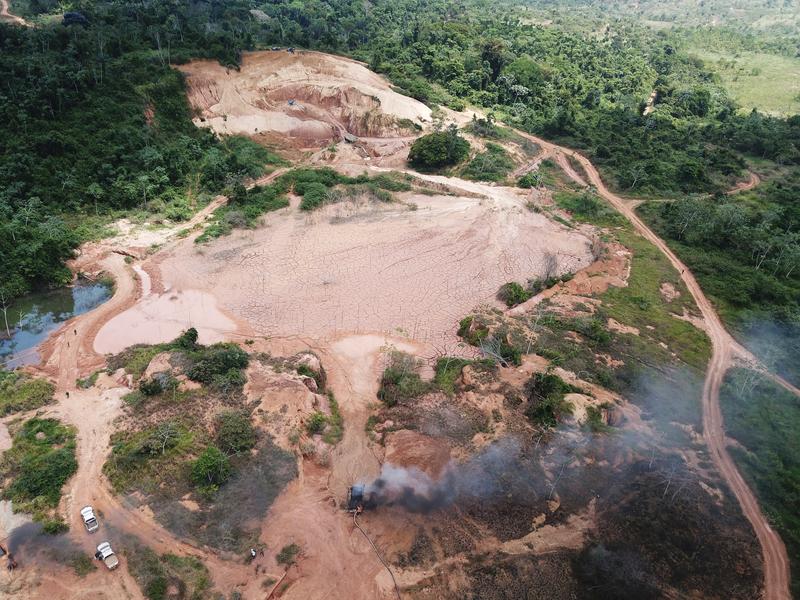 ALTAMIRA, Brazil (Reuters) – Federal agents in Brazil exchanged gunfire with illegal miners in the Amazon state of Para on Friday, according to Reuters witnesses, in a dramatic example of how Brazil has stepped up environmental enforcement in the wake of rainforest fires.

An aerial view shows machines being destroyed during an operation conducted by the Brazilian Institute for the Environment and Renewable Natural Resources (IBAMA) and Federal Police at an illegal gold mine near the city of Altamira, Para state, Brazil, August 30, 2019. Picture taken with a drone. REUTERS/Nacho Doce

Federal police and agents with environmental enforcement agency Ibama were carrying out a raid on illegal wildcat miners near the Ituna/Itatá indigenous reserve, which crosses into several municipalities including the city of Altamira, according to two Reuters witnesses.

“They (the miners) hid in the forest and shot at the team,” said Hugo Loss, Ibama’s national coordinator of enforcement operations, who accompanied the mission.

The agents returned fire, but all of the miners escaped into the woods and no suspects were apprehended. No-one was injured, according to the official. Ibama and the federal police destroyed two backhoes and three other pieces of mining equipment.

Ibama had largely rolled back its field operations in Para state so far this year, over failure to reach an agreement with police at the state-level to offer support, according to Loss. State police generally accompany Ibama on potentially dangerous operations.

That came on top of efforts by the government of right-wing President Jair Bolsonaro to weaken Ibama, including prohibiting agents from destroying machinery used to commit environmental crimes and grounding the agency’s special forces unit used on riskier raids, according to a Reuters investigation.

But news broke last week that fires in the Amazon surged to their highest level since 2010 and provoked international criticism that Brazil was not doing enough to protect the world’s largest tropical rainforest.

That federal support allowed for Ibama-organized raids such as the one on Friday to be carried out, Loss said. The raid was not directly related to the fires.

“Only now with the recognition of alarming deforestation and fire data and with the (justice minister’s) decree, did we have conditions allowing us to operate in this area,” he said.

“In this area we had operations planned for June and July, but we weren’t able to execute them… because of lack of support.”

Illegal mining contributes to overall deforestation in Brazil, with roughly 10% of the area of the indigenous reserve near the raid having been deforested this year alone, Loss said.

Reporting by Pablo Garcia and Nacho Doce in Altamira and Eduardo Simoes in Sao Paulo; Writing by Jake Spring; Editing by Rosalba O’Brien