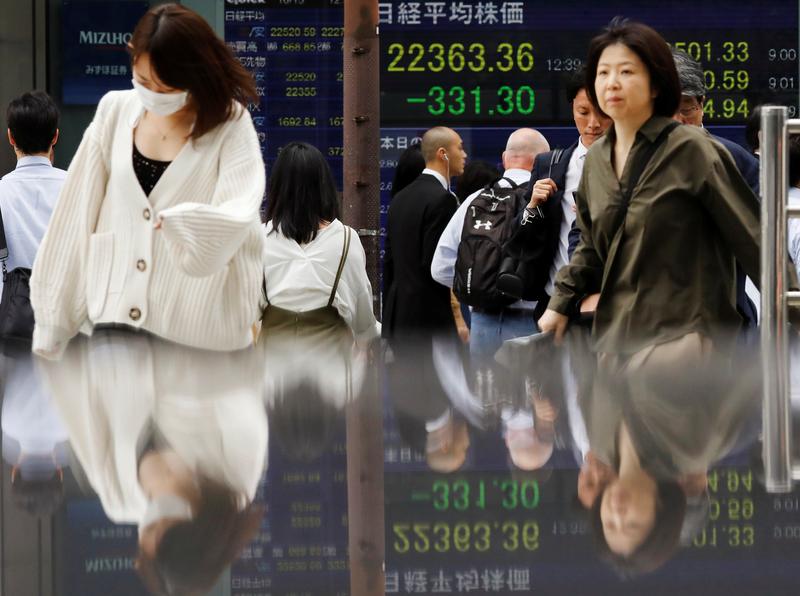 SYDNEY (Reuters) – Asian shares sank on Monday as the latest salvos in the Sino-U.S. trade war shook confidence in the world economy and sent investors steaming to the safe harbor of sovereign bonds and gold, while slugging emerging market currencies.

People walk past an electronic board showing Japan’s Nikkei average outside a brokerage in Tokyo, Japan, October 15, 2018. REUTERS/Toru Hanai

But equity markets later pared some losses, with E-Minis for the S&P 500 turning positive, after U.S. President Donald Trump said China had contacted Washington overnight to say it wanted to return to the negotiating table.

Speaking on the sidelines of a summit of major industrialized nations in France, Trump hailed Chinese President Xi Jinping as a great leader and said he welcomed his desire for a trade deal and for calm.

Yields on benchmark 10-year Treasury debt dropped to their lowest since mid-2016, while gold hit its highest since April 2013 as risk was shunned.

On Friday Trump announced an additional duty on some $550 billion of targeted Chinese goods, hours after China unveiled retaliatory tariffs on $75 billion worth of U.S. goods.

“The most recent trade escalation increases the risk of recession on top of what is now a synchronized global slowdown,” said Eleanor Creagh, markets strategist at Saxo Capital Markets.

“For investors, the hope of a trade deal is entirely misplaced at present,” she added. “Precious metals and gold miners will continue to outperform as investors seek out safe havens to stave off volatility.”

China’s onshore yuan fell 0.7% at one point to a new 11-year low of 7.15 to the dollar, and hit a record low in offshore trade, before paring losses after Trump’s latest comments.

“Downside risks are increasing for both the global economy and markets,” said Mark Haefele, global chief investment officer at UBS. “As a result, we are reducing risk in our portfolios by moving to an underweight in equities to lower our exposure to political uncertainty.”

“We continue to favor carry strategies in credit and foreign exchange markets, which benefit from central bank easing in a low-growth environment.”

Trump’s new tariff measures were announced after U.S. markets closed on Friday. But Wall Street had nose-dived earlier in the session after Trump said U.S. companies should “immediately start looking for an alternative to China”, in response to Beijing’s latest retaliation.

At the G7 meeting in France over the weekend, Trump caused some confusion by indicating he may have had second thoughts on the tariffs.

But the White House said on Sunday that Trump wished he had raised tariffs on Chinese goods even higher last week, even as he signaled he did not plan to follow through with a demand that U.S. firms close operations in China.

The latest trade escalation overshadowed a pledge by Federal Reserve Chair Jerome Powell to “act as appropriate” to keep the U.S. economy healthy, although he stopped short of committing to rapid-fire rate cuts.

The markets clearly believe the Fed will have to act more aggressively and are fully priced for at least a quarter-point cut in September and more than 120 basis points of easing by the end of 2020.

“Central banks can’t fully ameliorate the downside of a global trade war,” said JPMorgan analyst Adam Crisafulli. “Companies will enter lockdown mode in terms of spending, and eventually hiring, until at least the November 2020 election amid all the uncertainty.”

Yields on 10-year Treasury notes were down at 1.443%, having dived from a top of 1.66% on Friday, leaving them just below two-year yields and inverting the curve.

“We continue to remain long 10’s, targeting 1.3% due to a combination of weakness in the global economy and trade war uncertainty filtering through into a weaker U.S. economy,” said Priya Misra, head of global rates strategy at TD Securities.

“This will force the Fed to ease beyond a ‘mid-cycle adjustment to policy’,” she added. “We believe that the market is underpricing the risks of additional rate cuts in 2020.”

The drop in yields swept the legs out from under the dollar, though it rallied steadily through the session thanks in part to heavy buying against emerging market currencies.

After an early hit on the yen to 104.44, it recovered most of the lost ground to last stand at 105.2. The next major chart point is a low around 104.10 briefly touched during the “flash-crash” of early January.

Against a basket of currencies, it was broadly unchanged at 97.637 having bounced from 97.477.

The euro was firm at $1.1147, having climbed 0.6% on Friday, although restrained somewhat by speculation the European Central Bank will also have to ease aggressively next month.

The dollar made inroads on most emerging market currencies, with the Turkish lira briefly tumbling as far as 6.4700 per dollar at one stage.

“For gold, the party is just beginning, and we maintain a bullish outlook for gold, particularly AUD gold,” Saxo’s Creagh said.

Oil prices went the other way on worries the tariff dispute would crimp world demand.

At a joint news conference with French President Emmanuel Macron, Trump declined to comment on whether he would waive oil sanctions to get Iran to the negotiating table.