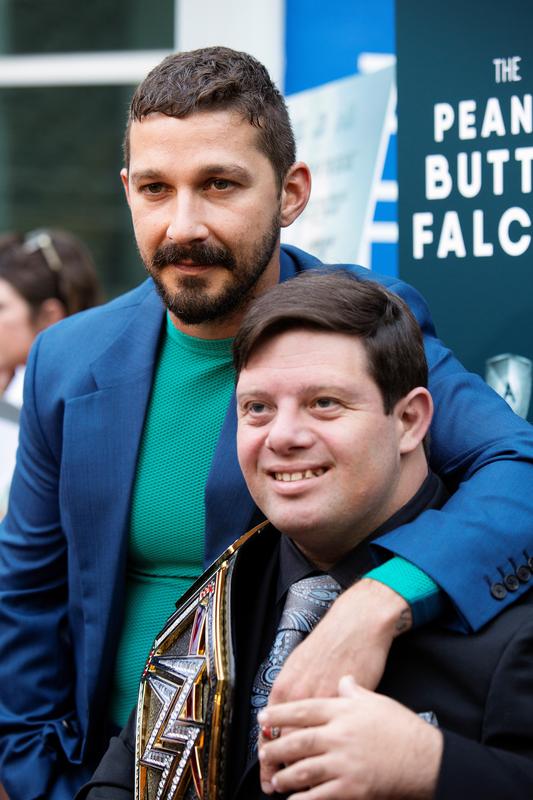 LOS ANGELES (Reuters) – The critically acclaimed new movie “The Peanut Butter Falcon” took an unusual path to Hollywood and has made an unlikely star of Zack Gottsagen, an actor who has Down syndrome.

Gottsagen plays the leading role of a young man who escapes from the nursing home where he is living to pursue his dream of becoming a professional wrestler. On his travels, he becomes friends with a small-time crook portrayed by “Transformers” star Shia LaBeouf. Dakota Johnson co-stars as a nurse sent to find Gottsagen’s character.

It is one of the few Hollywood films to feature an actor with Down syndrome in a lead role.

At the movie’s red-carpet premiere, co-directors and writers Tyler Nilson and Michael Schwartz said they met Gottsagen when they were volunteering at a camp for people with disabilities and Gottsagen said he wanted to become a movie star.

The pair, who had made a short film and worked on commercials but had never produced a feature film, decided to write a movie that Gottsagen could star in.

“We sat down for a year and worked on the script and tried to build something that would show him in the best light possible for who he is, a human being with hopes and dreams and goals who has the capacity to love even deeper than I do,” Nilson said.

The movie has charmed critics, earning a 100 percent positive rating on review aggregation website Rotten Tomatoes. It will be released in the United States on Aug. 9.

Both LaBeouf and Johnson said they developed a kinship with Gottsagen.

“He’s like some sort of guardian to me,” LaBeouf said. “He’s been a pillar in my life. He keeps me afloat and gives me a bunch of advice.”

At the premiere, Gottsagen had advice for others who want to follow his lead. “Follow your heart and follow your dreams,” he said. “But first, you should stay at school, study, study a lot.”

After that, “Reach for the top and you can go big,” he added.