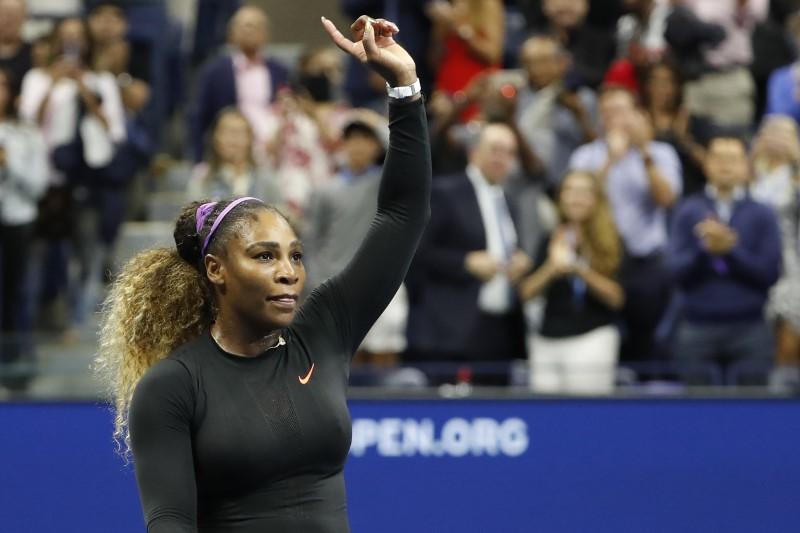 Sep 4, 2019; Flushing, NY, USA; Serena Williams of the United States gestures to the crowd after her match against Elina Svitolina of Ukraine (not pictured) in a semifinal match on day eleven of the 2019 US Open tennis tournament at USTA Billie Jean King National Tennis Center. Mandatory Credit: Geoff Burke-USA TODAY Sports

NEW YORK (Reuters) – A rampaging Serena Williams moved to the brink of a record equaling 24th career Grand Slam title on Thursday storming past Elina Svitolina 6-3 6-1 to book her spot in the U.S. Open final.

Since returning to action after the birth of her first child Williams has come agonizingly close to matching Margaret Court’s mark three times and will have a chance on Saturday to do so in front of an adoring home crowd for a second successive year.

Last year Williams was left in tears following a chaotic and controversial loss to Naomi Osaka on Arthur Ashe Stadium. She has also lost two Wimbledon finals since her return.

Now all that stands between the 37-year-old and her Holy Grail is Canadian Bianca Andreescu or Swiss Belinda Bencic, who will meet in the other semi-final later on Thursday.

The semi-final offered a classic matchup of styles with Williams and her prodigious power up against Svitolina, one of the best counter punches in the women’s game.

Williams did not have her ‘A’ game in warm conditions but the former-world number one knew exactly what was needed particularly on the big points.

The fifth seeded Ukrainian had no shortage of chances but could not convert any of six break opportunities.

A ruthless Williams, however, bombarded Svitolina with punishing forehands and six aces to register her 101st U.S. Open win, which tied her with Chris Evert for the most at Flushing Meadows.