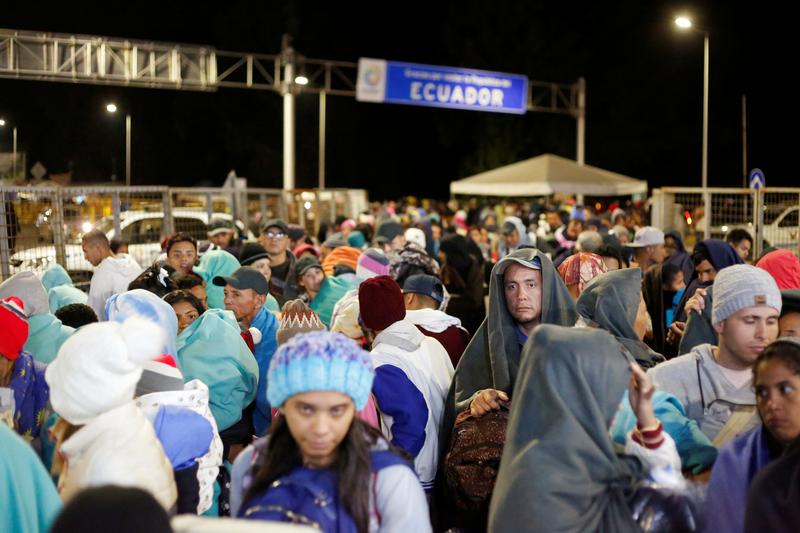 BOGOTA (Reuters) – More than 85,000 Venezuelan migrants crossed into Ecuador from Colombia in the last month, ahead of new visa restrictions from Quito that took effect on Monday, the Colombian government said.

The number of migrants entering Ecuador at the Rumichaca border crossing reached 11,000 over the weekend, an uptick of 30% compared to normal traffic, according to figures from Colombia’s migration agency.

Colombia is home to some 1.4 million Venezuelans who have fled a deep political and economic crisis that has caused long-running shortages of food and medicine. Hundreds of thousands of others have passed through the country on their way to Ecuador, Peru, Chile and other destinations.

Ecuador will now require a visa for Venezuelan citizens, part of stricter immigration policies being implemented in several countries.

The new rule will not stop people from migrating out of necessity, but will instead increase the number of people using informal crossings, Colombia’s Foreign Minister Carlos Holmes Trujillo said in a statement.

“The passage of migrants through unauthorized areas, the so-called ‘shortcuts,’ boosts crime and human trafficking, putting people at risk,” said Trujillo. “It also stops the state from identifying the population that is entering, meaning migration figures are not known with certainty and necessary policies cannot be implemented to tend to that population.”

Unlike its neighbors Colombia has not put in place stringent immigration requirements, instead encouraging migrants who entered the country informally to register with authorities so they can access healthcare, school places and other social services.

Colombia said this month it would give citizenship to more than 24,000 children born in the country to Venezuelan migrant parents, to prevent the children from being stateless and less able to access public services.

Some 320,000 Venezuelans currently live in Ecuador. The government estimates that figure could increase to nearly half a million by the end of the year.