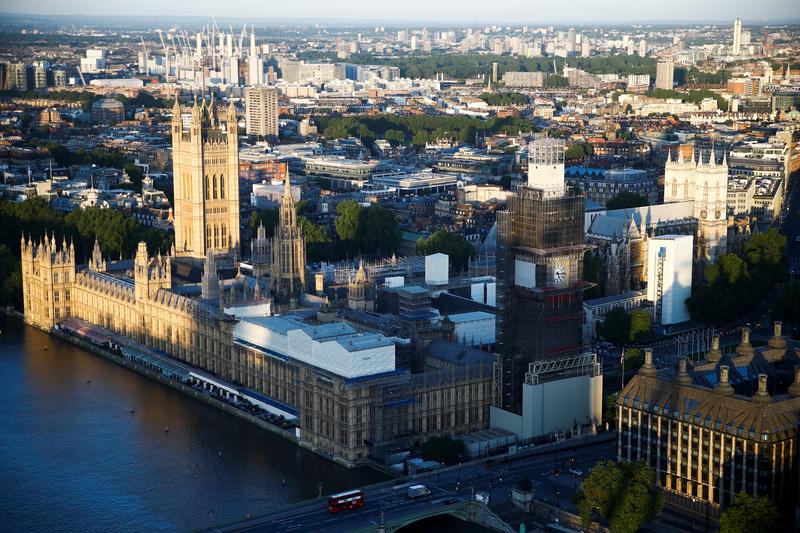 LONDON (Reuters) – Britain posted a larger-than-expected budget deficit last month as government spending rose, a reminder that the next finance minister may have limited options to cushion any Brexit blow to the economy.

FILE PHOTO: The Houses of Parliament can be seen during sunrise on the day of the Summer Solstice, seen from atop the London Eye, in London, Britain June 21, 2019. REUTERS/Henry Nicholls

The budget deficit widened to 5.115 billion pounds, the Office for National Statistics said on Friday, a 23% rise from May 2018 and above all forecasts in a Reuters poll of economists.

For the first two months of the 2019/20 financial year, the deficit was 18% larger than a year earlier at just under 12 billion pounds.

Britain’s official budget forecasters have predicted an increase in government borrowing this year after a steady decline in the deficit from around 10% of economic output in 2010 to just above 1% last year.

“The higher than expected borrowing figures over the first two months of the financial year highlight the strain that a slowing economy could place on the UK’s public finances in the months ahead,” said Pablo Shah, senior economist at the Centre for Economics and Business research consultancy.

Other economists said the data may have been affected by one-off factors, such as a rise in government investment.

“May’s public finance data are not a sign that the economy is losing momentum,” economist Samuel Tombs from Pantheon Macroeconomics said.

The ONS raised its estimate for borrowing in the 2018/19 financial year to 24.0 billion pounds, up from a previous 23.5 billion-pound forecast, pushing further above finance minister Philip Hammond’s missed target of 22.8 billion pounds.

Government spending in May rose 2.6% compared with a year ago, driven mostly by the purchase of goods and services.

Growth in tax receipts was mostly solid, but corporation tax revenue edged down last month by 0.8% — the first annual decline for any May since 2013.

Hammond this week ramped up his warnings to whoever becomes Britain’s next prime minister that a no-deal Brexit would wipe out the money he has set aside for potential increases in public spending or tax cuts, which would represent an end to the austerity policies of much of the last decade.

Both candidates to replace Theresa May as prime minister — former foreign secretary Boris Johnson and his successor, Jeremy Hunt — have said they are prepared to take Britain out of the European Union without a transition agreement if necessary.

Most political commentators think Hammond would be replaced if Johnson, the frontrunner in the race to succeed May, wins.