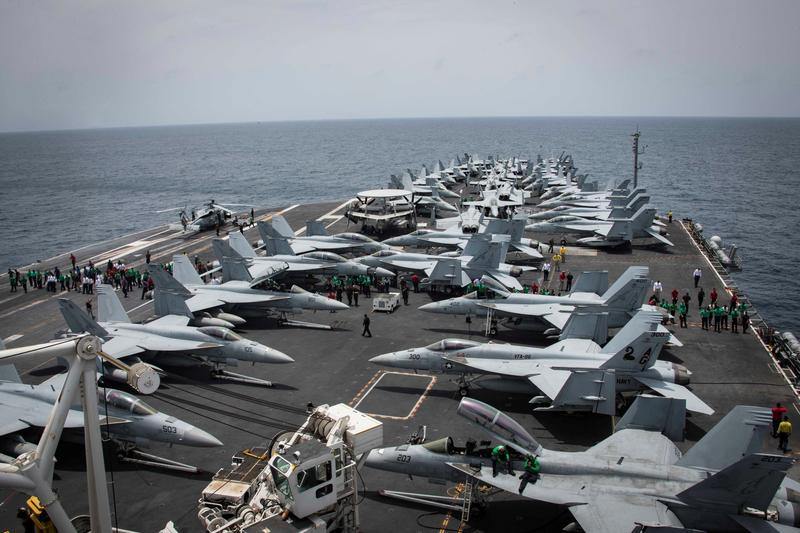 WASHINGTON/DUBAI (Reuters) – Acting U.S. Defense Secretary Patrick Shanahan announced on Monday the deployment of about 1,000 more troops to the Middle East for what he said were defensive purposes, citing concerns about a threat from Iran.

Fears of a confrontation between Iran and the United States have mounted since last Thursday when two oil tankers were attacked, which Washington has blamed on Tehran, more than a year after President Donald Trump said Washington was withdrawing from a 2015 nuclear deal.

“The recent Iranian attacks validate the reliable, credible intelligence we have received on hostile behavior by Iranian forces and their proxy groups that threaten United States personnel and interests across the region,” Shanahan said in a statement.

The new U.S. deployment to the Middle East is in addition to a 1,500-troop increase announced last month in response to tanker attacks in May. Washington previously tightened sanctions, ordering all countries and companies to halt imports of Iranian oil or be banished from the global financial system.

Iran said on Monday it would soon breach limits on how much enriched uranium it can stockpile under the deal, which a White House National Security Council spokesman said amounted to “nuclear blackmail.”

The 2015 accord, which Iran and the other signatories have maintained following Trump’s decision, caps Iran’s stock of low-enriched uranium at 300 kg enriched to 3.67 percent.

But Iran’s Atomic Energy Organization spokesman Behrouz Kamalvandi said on Monday: “We have quadrupled the rate of enrichment (of uranium) and even increased it more recently, so that in 10 days it will bypass the 300 kg limit.”

“Iran’s reserves are every day increasing at a more rapid rate,” he told state TV, adding that “the move will be reversed once other parties fulfil their commitments.”

The move further undermines the nuclear pact also signed by Russia, Britain, Germany, China and the European Union, but Iranian President Hassan Rouhani said the collapse of the deal would not be in the interests of the region or the world.

The nuclear deal seeks to head off any pathway to an Iranian nuclear bomb in return for the removal of most international sanctions.

European Union foreign policy chief Federica Mogherini said, however, the EU would only react to any breach if the International Atomic Energy Agency formally identified one.

Trump’s administration has accused Iran of being behind the explosions on tankers in the Gulf of Oman, a vital oil shipping route.

The United States released a video last week it said showed Iran’s Revolutionary Guard was behind the latest attacks near the Strait of Hormuz on the Norwegian-owned Front Altair, which was set ablaze, and the Japanese-owned Kokuka Courageous.

“Iran is responsible for the attack based on video evidence and the resources and proficiency needed to quickly remove the unexploded limpet mine,” Central Command said in a statement.

A U.S. defense official, speaking on condition of anonymity, said the new deployment included forces who operate the U.S. military’s airborne intelligence, surveillance and reconnaissance capabilities that help detect threats and scoop up sensitive imagery and intelligence. The deployment would also involve personnel who can strengthen protection of U.S. troops already deployed to the region.

Iran’s armed forces chief of staff, Major General Mohammad Baqeri, denied on Monday that Tehran was behind the attacks and said if the Islamic Republic decided to block the strategic Strait of Hormuz shipping lane, it would do so publicly.

The secretary of Iran’s Supreme National Security Council, Ali Shamkhani, said Tehran was responsible for security in the Gulf and urged U.S. forces to leave the region, state TV said.

U.S. Secretary of State Mike Pompeo has spoken to officials from the North Atlantic Treaty Organization, China, Kuwait, South Korea, Britain and other countries to share evidence of Iran’s involvement in the attacks on the Norwegian and Japanese tankers, a senior State Department official said.

Pompeo said on Sunday the United States did not want to go to war with Iran but would take every action necessary, including diplomacy, to guarantee safe navigation through Middle East shipping lanes.

The 2015 accord requires Iran to curb its uranium enrichment capacity, capping Iran’s stock of low-enriched uranium at 300 kg of uranium hexafluoride enriched to 3.67 percent or its equivalent for 15 years. That is far below the 90 percent needed for weapons-grade uranium and also below the 20 percent level to which Iran enriched uranium before the deal.

A series of U.N. inspections under the deal have verified that Iran has been meeting its commitments.

In May, Tehran said it would reduce compliance with the nuclear pact in protest at the U.S. decision to unilaterally pull out of the agreement and reimpose sanctions.

The Trump administration says the nuclear deal, negotiated by Democratic President Barack Obama, was flawed as it is not permanent, does not address Iran’s ballistic missile program and does not punish it for waging proxy wars in other Middle East countries.

Kamalvandi, in a news conference at Iran’s Arak heavy water nuclear reactor, which has been reconfigured under the deal, said Tehran could rebuild the underground facility to make it functional. Heavy water can be employed in reactors to produce plutonium, a fuel used in nuclear warheads.

In January, Iran’s nuclear chief, Ali Akbar Salehi, told state TV that “despite pouring concrete in pipes within the core of the Arak reactor … Iran had purchased pipes for replacement in case the West violated the deal.”

The United States and the IAEA believe Iran had a nuclear weapons program that it abandoned. Tehran denies ever having had one.

Iran’s Rouhani said on Monday that European nations still had time to save the accord.

“It’s a crucial moment, and France can still work with other signatories of the deal and play a historic role to save the deal in this very short time,” Rouhani was quoted as saying during a meeting with France’s new ambassador in Iran.