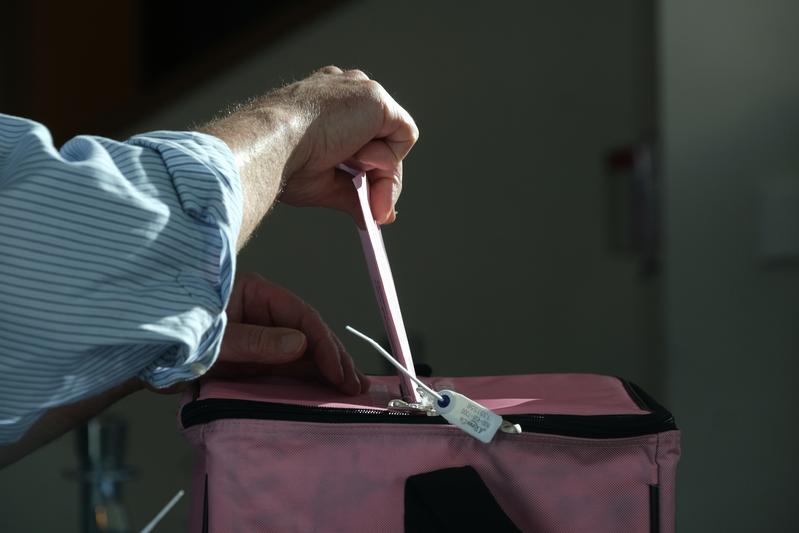 A man submits his mail-in ballot into a ballot box in the California Presidential Primary ahead of Super Tuesday at an early voting site at The California Museum in Sacramento, California, U.S., March 2, 2020. REUTERS/Gabriela Bhaskar

WASHINGTON (Reuters) – National security professionals from across the U.S. government will meet on Tuesday in a Northern Virginia office building for an unprecedented monitoring effort to counter cyberattacks and foreign disinformation aimed at Super Tuesday presidential primaries.

Since U.S. intelligence agencies concluded that Russia interfered in the 2016 election – allegations Moscow denies – the U.S. government has introduced measures to combat hacking and foreign propaganda activities designed to affect the vote. Election security experts say that while the government has made improvements, many vulnerabilities still exist.

On Tuesday, representatives from the Homeland Security Department, FBI, National Security Agency and U.S. Cyber Command will be positioned at the Cybersecurity Infrastructure Security Agency facility to rapidly respond to any attacks on presidential primaries scheduled in 14 states.

State and local election officials spread across the country will also be connected to the nerve center, reporting their experiences and any suspicious cyber incidents.

In a joint statement on Monday, the heads of each participating agency warned of “sharp consequences” for “foreign actors” that attempt to meddle in the 2020 election.

“The level of coordination and communication between the federal government and state, local and private sector partners is stronger than it’s ever been,” the statement read.

Ben Spear, head of the Elections Infrastructure Information Sharing and Analysis Center (EI-ISAC), a contractor for CISA, said that all 50 states had installed monitoring software on their systems since 2016 to detect cyberattacks.

“We’re seeing significant engagement from state and local (officials),” said Spear, noting the differences between the 2020 and 2016 primaries.

Spear said the government would rely on an internal, text-based messaging platform to share information rapidly among federal agencies and state election officials in the field on Tuesday. The platform offers a dashboard to rapidly transfer documents and other relevant files.