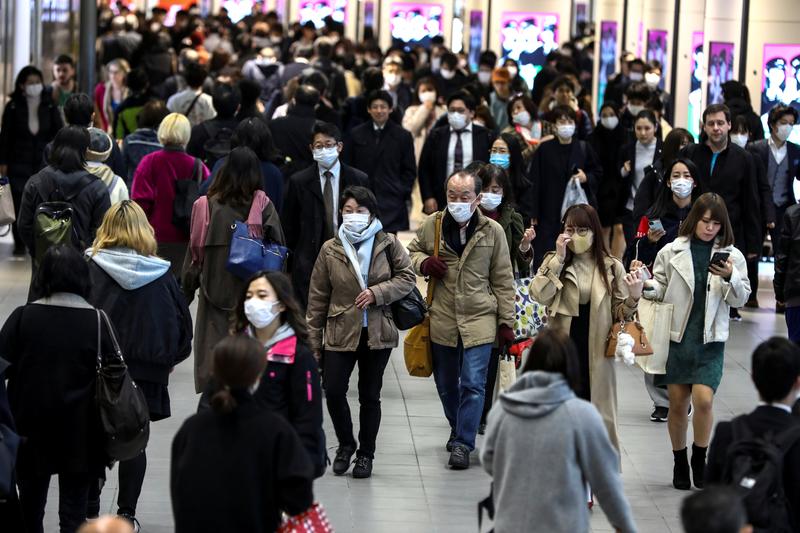 TOKYO/WASHINGTON (Reuters) – The U.S. Federal Reserve cut interest rates on Tuesday in an emergency move designed to shield the world’s largest economy from the impact of the coronavirus, as Group of Seven finance officials pledged “appropriate”, unspecific policy moves.

Crowds wearing protective masks, following the outbreak of the coronavirus, are seen at the Shinjuku station in Tokyo, Japan, March 3, 2020. REUTERS/Athit Perawongmetha

“The fundamentals of the U.S. economy remain strong. However, the coronavirus poses evolving risks to economic activity,” it said in a statement.

The coronavirus, which emerged in the central Chinese city of Wuhan late last year, has spread around the world, with more new cases now appearing outside China than inside. It has hit sports events, trade exhibitions, book fairs, prayer meets and other large gatherings worldwide.

There are more than 90,000 cases globally, with more than 80,000 of them in China, and infections appearing in 77 other countries and territories, with Ukraine the latest to report its first case.

“We reaffirmed our commitment to adopt all appropriate policy steps to protect the economy from downside risks posed by the coronavirus, and that we stand ready to cooperate further on timely and effective measures,” Aso said after a G7 call.

He offered no quick fix and said the desirable policy response would vary from country to country.

He said the United States was not considering lowering tariffs on goods from China, after a bruising trade war with the world’s second-largest economy, but would look at all options. He applauded the “non-political” Fed move.

A sharp rebound in world stock markets lost only a little steam on Tuesday, despite a lack of any immediately gratifying G7 measures. Europe’s main bourses were almost 2% higher. But Wall Street’s main S&P 500 and Dow Jones markets gave up early gains to slip into the red.

The dollar fell across the board.

Global stocks suffered a rout last week on fears that the disruption to supply chains, factory output and global travel caused by the epidemic could deal a serious blow to a world economy trying to recover from the U.S.-China trade war.

“This is a tug of war between hope and fear. Central banks are giving hopes with their potential stimulus,” said Vasu Menon, senior investment strategist at OCBC Bank Wealth Management.

“The question is what they will do? Monetary policy is already very loose and interest rates are very low.”

New coronavirus cases in China have been falling sharply, with 125 reported on Tuesday, thanks to aggressive containment measures.

After what critics said was an initially hesitant response, China imposed sweeping restrictions, including suspensions of transport, sealing off communities, and extending a Lunar New Year holiday across the country.

Now China is increasingly concerned about the virus being brought back into the country by citizens returning from new hotspots elsewhere. Authorities on Tuesday asked overseas Chinese to reconsider or minimize their plans to travel home.

All travelers entering Beijing from South Korea, Japan, Iran and Italy would have to be quarantined for 14 days, a city official said. Shanghai has introduced a similar order.

The most serious outbreak outside China is in South Korea, where President Moon Jae-in declared war on the virus, ordering additional hospital beds and more masks as cases rose by 600 to nearly 5,000. Thirty-four people have died in South Korea.

In the United States, the virus is now believed to be present in at least four communities in the Pacific Northwest – two in northern California, one in Oregon and one in Washington state – and authorities there are having to go well beyond the quarantine of infected travelers and tracing of close contacts, which until now had been the response.

Six people have died in the Seattle outbreak. The U.S. Centers for Disease Control and Prevention lists more than 90 cases across the United States, a large bulk of them patients repatriated from the Diamond Princess cruise liner that had been quarantined in Japan. New York reported its second confirmed case on Tuesday.

Iran has had 77 deaths, the highest number outside China, and 2,336 confirmed infections, the health ministry said on Tuesday.

The death toll in Italy jumped to 52 on Monday from 34 the day before and the total number of confirmed cases in Europe’s worst-affected country climbed past the 2,000 mark. France reported its fourth coronavirus death.