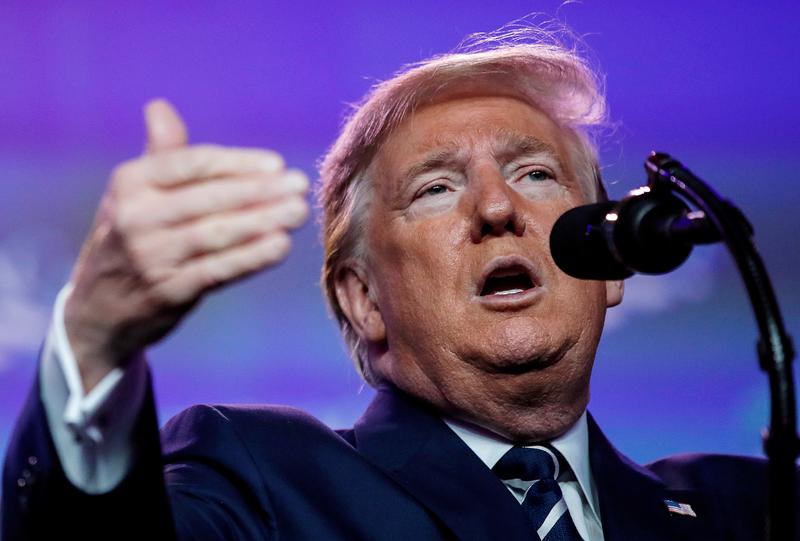 CAIRO (Reuters) – U.S. President Donald Trump told Egyptian counterpart Abdel-Fattah al-Sisi on Tuesday that Washington will keep up efforts for a deal among Egypt, Ethiopia and Sudan over a dam Ethiopia is building on the Nile, Egypt’s presidency said.

The three countries had expected to sign an accord in Washington last week on the filling and operation of the $4 billion Grand Ethiopian Renaissance Dam (GERD), but Ethiopia skipped the meeting and only Egypt has initialed the deal thus far.

“President Trump emphasized that the U.S. administration will keep up tireless efforts and coordination with Egypt, Sudan and Ethiopia over this vital issue until the three countries sign an agreement over the Renaissance Dam,” the Egyptian presidency said in a statement.

In its own statement on the phone conversation, the White House said Trump “expressed hope that an agreement on the Grand Ethiopian Renaissance Dam would be finalised soon and benefit all parties involved.”

Sisi told Trump that Cairo would continue “giving this issue the utmost attention in defense of the interests of the Egyptian people, their capabilities and their future,” the Egyptian presidency added.

The dam is the centerpiece in Ethiopia’s ambition to become Africa’s biggest power exporter. But it has sparked fears in Cairo that Egypt’s already scarce supplies of Nile river water, on which its population of more than 100 million people is almost entirely dependent, would be further restricted.

Egypt – a largely desert country – is short of water. It imports about half its food products and recycles about 25 billion cubic meters of water annually.

Ethiopia, which announced the dam project in 2011 as Egypt was beset by political upheaval, denies the dam will undermine Egypt’s access to water.

The dam is under construction near Ethiopia’s border with Sudan on the Blue Nile, which flows into the Nile river. Egypt and Ethiopia have been at odds over how quickly the reservoir behind the giant dam can be filled and how much water Ethiopia should promise to release.

The United States has hosted several rounds of talks in Washington with ministers from the three regional powers and the World Bank after years of trilateral negotiations failed.

“We have been trying to bring the parties together. They have made enormous progress. We were incredibly disappointed that Ethiopia didn’t show up for the last meeting,” U.S. Treasury Secretary Steven Mnuchin told a hearing of the U.S. House Ways and Means Committee on Tuesday.

“It is an important issue for the entire region. It is obviously a grave concern – there are safety concerns, there are water concerns,” Mnuchin said.

Ethiopia has said it needs more time for deliberations. It says outstanding issues concerning the dam’s operation and the filling of its reservoir have yet to be addressed, but that it can commence filling in parallel with construction of the dam.

“The U.S. statement that says Ethiopia shouldn’t start filling the dam without reaching an agreement is diplomatically incorrect and we think it is wrong and we expect the U.S. to correct this statement,” Foreign Minister Gedu Andargachew told reporters on Tuesday.

Egypt accused Ethiopia on Sunday of “deliberately” not attending the last round of talks in Washington last week “to hinder the path of negotiations”.

Reporting by Mohamed Wali and Mahmoud Mourad in Cairo, Andrea Shalal in Washington, and Dawit Endeshaw in Addis Ababa; Writing by Aidan Lewis; Editing by Mark Heinrich and Dan Grebler