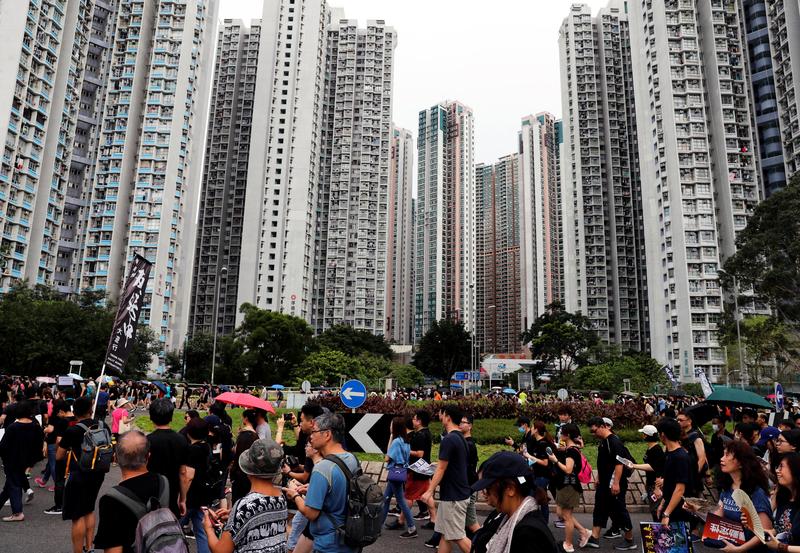 HONG KONG (Reuters) – Thousands of protesters took to Hong Kong’s streets on Sunday, a day after violent clashes between anti-government protesters and police, and as China’s official news agency warned Beijing will not let the situation in the Asian financial hub continue.

The Chinese-controlled city has been rocked by months of protests against a proposed bill to allow people to be extradited to stand trial in mainland China and a general strike aimed at bringing the city to a halt is planned for Monday.

Police said in a statement early on Sunday that they had arrested more than 20 people for offences overnight including unlawful assembly and assault.

On Saturday police fired multiple tear gas rounds in confrontations with black-clad activists in the city’s Kowloon area. On Sunday thousands of demonstrators marched peacefully in the town of Tseung Kwan O in the New Territories brandishing colorful banners and leaflets.

Dressed in black the protesters cheered as they called for a mass strike across Hong Kong on Monday.

“We’re trying to tell the government to (withdraw) the extradition bill and to police to stop the investigations and the violence,” said Gabriel Lee, a 21-year-old technology student.

Lee said what made him most angry was that the government was not responding to any of the protesters’ demands or examining the police violence.

By Sunday evening, some protesters had blocked roads in the area, removing railings from the kerbside and setting up barricades.

In the island’s Western district, thousands of people gathered to rally in a park to urge authorities to listen to public demands.

What started as an angry response to the now suspended extradition bill, has expanded to demands for greater democracy and the resignation of leader Carrie Lam.

“Even if Carrie Lam resigns, its still not resolved. It’s all about the Communist Party, the Chinese government,” said Angie, a 24 year old working for a non-government organization in the city.

Protesters on Saturday set fires in the streets, outside a police station and in rubbish bins, and blocked the entrance to the Cross-Harbour Tunnel, cutting a major artery linking Hong Kong island and the Kowloon peninsula.

The protests have become the most serious political crisis in Hong Kong since it returned to Chinese rule 22 years ago after being governed by Britain.

Thousands of civil servants joined in the anti-government protests on Friday for the first time since they started in June, defying a warning from authorities to remain politically neutral. [L4N24Y3BF]

The protests have adapted rapidly since the start of June with the movement spreading from the city’s Admiralty area, where the legislative council is located, across to the whole city for the first time.

Previous protests have also targeted mainland visitors to try and make them understand the situation in the special administrative region.

Young people have mostly been at the forefront of the protests, infuriated with broader problems including sky-high living costs and what they see as an unfair housing policy skewed toward the rich.

However, the demonstrations have seen people of all ages, including families and the elderly take part.

The protests mark the biggest popular challenge to Chinese leader Xi Jinping since he took office in 2012.

China’s official news agency Xinhua wrote on Sunday that the “central government will not sit idly by and let this situation continue. We firmly believe that Hong Kong will be able to overcome the difficulties and challenges ahead. “

Hong Kong has been allowed to retain extensive freedoms, such as an independent judiciary but many residents see the extradition bill as the latest step in a relentless march toward mainland control.

Matthew Wang, a 22-year-old marketing executive for a multinational corporation, said that the government was “encouraging people to become more radical to affect decision making because they are not addressing any of the demands.”