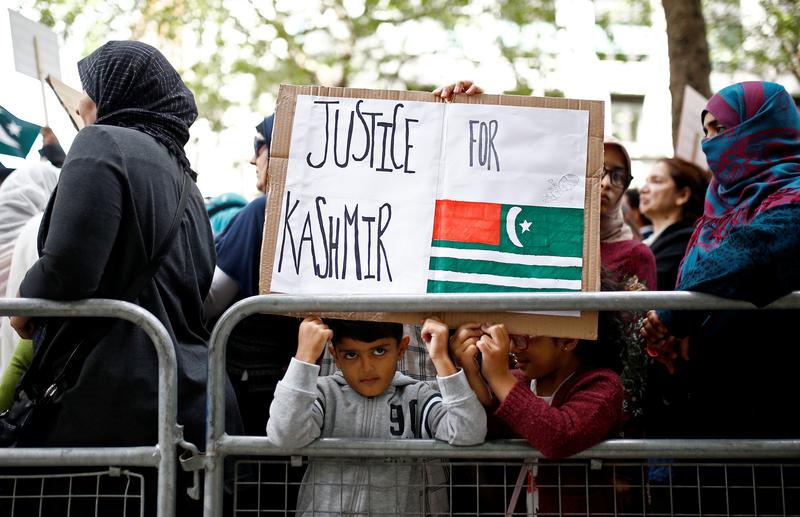 LONDON (Reuters) – Thousands of people, many waving Pakistani and Kashmiri flags, protested outside the Indian High Commission in London on Thursday in support of the disputed Himalayan region of Kashmir.

Children hold a banner during a protest against the scrapping of the special constitutional status in Kashmir by the Indian government, outside the Indian High Commission in London, Britain, August 15, 2019. REUTERS/Henry Nicholls

India’s decision to revoke special status for its portion of Kashmir, along with a communications blackout and curbs on movement, caused fury in Pakistan, which cut trade and transport links and expelled India’s envoy in retaliation.

In London, protesters carried banners saying “Kashmir is Burning”, “Free Kashmir” and “Modi: Make Tea Not War”, according to a Reuters reporter.

A small counter-demonstration was kept apart from the main protest by the police.

Four people were arrested for affray, obstruction of police and possession of an offensive weapon, police said.

“One person was injured during the demonstrations,” they said.

A Reuters photograph showed police carrying away a large curved knife from the protest.

Indian Prime Minister Narendra Modi delivered an Independence Day speech on Thursday that spotlighted his decision to remove the special rights of Kashmir among the bold moves of his second term.

Many of the London protesters had come to the capital from other English cities on specially chartered buses.

“We want to show our solidarity with our Kashmiri brothers,” said Amin Tahir, a British pensioner of Kashmiri origin who came from Birmingham on one of the coaches.

“Since 1947 Kashmir has been struggling to be free from India. Now Modi has changed the law by force to stop Kashmir’s autonomy,” he said.