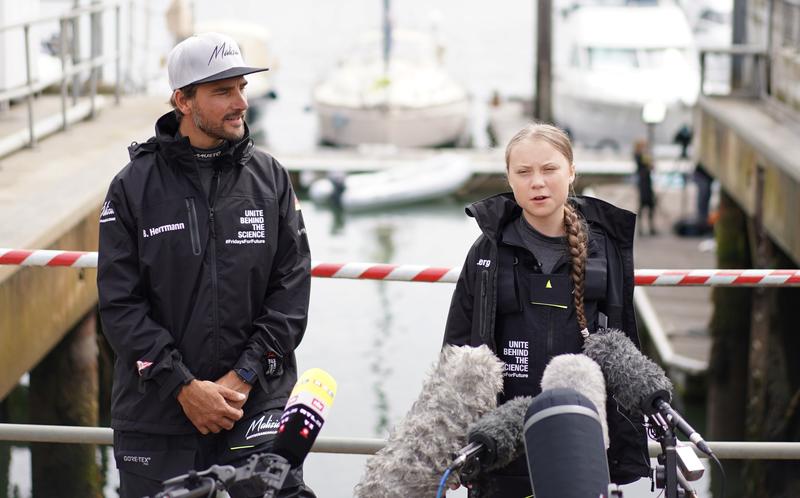 PLYMOUTH, England (Reuters) – With the wind in her hair and TV cameras pointing at her, Swedish teenager Greta Thunberg began a trans-Atlantic crossing in a racing yacht on Wednesday to further her campaign for stronger action against climate change.

The 16-year-old activist, who shot to global fame last year after she started missing school every Friday to demonstrate outside the Swedish parliament, is bound for New York, where she will take part in a United Nations climate summit.

Standing on a pontoon in a marina in Plymouth, southwest England, Thunberg gave a news conference in front of a throng of TV crews and photographers just before setting sail under a typically English grey sky on the 60-foot yacht Malizia II.

The vessel has been equipped with solar panels and underwater electricity turbines to ensure that it leaves no carbon footprint. Conditions on board are Spartan, with no shower or toilet, and meals will consist of freeze-dried food.

Thunberg, who was wearing a black waterproof jacket emblazoned with the slogan “Unite Behind the Science”, was asked how she expected other people to travel across continents, given that not everyone could muster a racing yacht and crew.

“I am not telling anyone what to do or what not to do,” she responded. “I am one of the very, very few people in the world who actually can do this and I think I should take that chance.”

She said that her voice was not heard at all when she first started campaigning on climate change issues, and it was only after she started her school strikes and other teenagers began to emulate her that she made an impact. This had convinced her of the value of creative forms of campaigning.

Having previously said it would be a waste of time for her to meet President Donald Trump, who has pulled the United States out of the Paris accord on limiting the effects of climate change, Thunberg was pressed on why she would not want to seize any chance to convince him or other skeptics.

“I’m not that special. I can’t convince everyone. Instead of speaking to me and to the school-striking children and teenagers they should be talking to actual scientists and experts in this area,” she said.

“There are climate delayers who want to do everything to shift the focus from the climate crisis to something else, or want to make people question the science. I’m not worried about that. I’m just going to do as I want to do and what I think will have most impact.”

Thunberg is taking a year off school to travel around the Americas. She said she did not yet know how she would come home at the end of her travels.