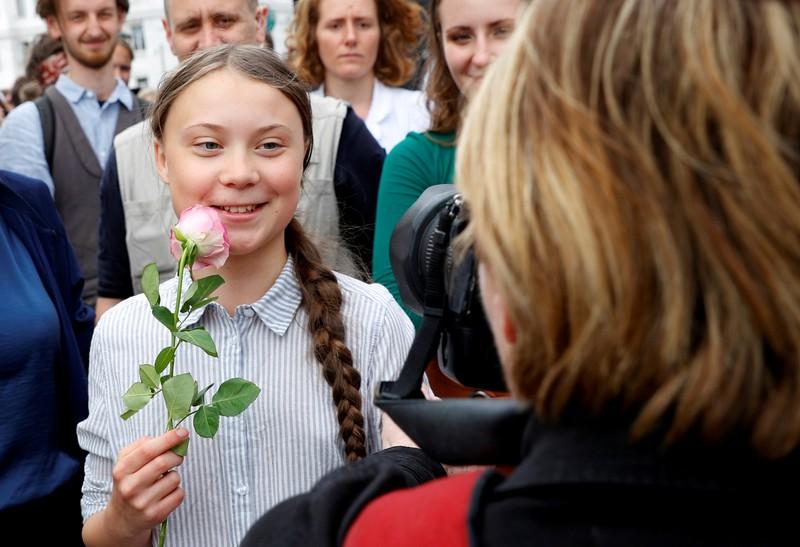 LONDON (Reuters) – Bill McKibben, a U.S. author and leading figure in global climate activism, has challenged adults to join a youth-led general strike in September, saying bold action may yet prevent civilization being cut off “at the knees.”

Inspired by 16-year-old Swedish activist Greta Thunberg’s success in mobilizing hundreds of thousands of children to walk out of classrooms, veteran campaigner McKibben, 58, wants to light an equivalent fire under his own generation.

“People have risen to crises before. It was our parents’ and grandparents’ generation who faced the crisis of fascism in Europe,” McKibben told a packed auditorium in London late on Thursday at a talk organized by the Guardian newspaper.

“We are in an existential emergency of the same kind, so staying away from work for a day and organizing is not too much to ask.”

An intense, scholarly figure, who lives in the U.S. state of Vermont, McKibben first sounded the alarm over climate crisis in 1989 with his book “The End of Nature”, one of the first to explain the risks to the public.

Thirty years on, the author-activist is unsparing in his reminders that some scientists fear the human race may have already missed its chance to avert catastrophe.

“That’s what the goal is now. It’s not inspiring in a way that saying ‘I have a dream’ is inspiring. It’s more like: ‘let’s see how tame we can keep this nightmare’.”

As floods, heat waves and wildfires have ravaged communities in developed countries that once felt far removed from the climate emergency, an explosion of public anger has piled new pressure on politicians, investors and companies.

In Britain, a civil disobedience campaign by Extinction Rebellion forced parliament to declare a symbolic climate emergency in early May. The move foreshadowed a surge in support for Green candidates in northern Europe in elections to the European Parliament later that month.

“We’re clearly in a climate moment now,” McKibben said. “And it’s clearly the last climate moment that’s going to come in a period of time when there’s still effective action to be taken.”

Leading figures from the worlds of climate science and diplomacy have backed calls for a week of action starting with a strike on Sept. 20 to build on the momentum. Supporters include Christiana Figueres, a Costa Rican diplomat who delivered the 2015 Paris Agreement, U.S. climate scientist Michael Mann, British lawyer Farhana Yamin and Indian activist Vandana Shiva.

McKibben has been pivotal in the coalition, joining friends and students to co-found campaign group 350.org in 2008. The network has since spearheaded a worldwide divestment campaign that has won commitments from more than 1,000 investors worth almost $8 trillion to withdraw from coal, oil and gas.

Arrested outside the White House in 2011 for protesting against a planned oil pipeline, McKibben is hoping his new book “Falter: Has the Human Game Begun to Play Itself Out?” will help spur the urgency he had hoped to trigger three decades ago.

“My worry — the thing that makes me scared sometimes — is that unlike all the other fights that humans have gotten themselves into, this one comes with a time limit,” McKibben said. “And if we don’t win soon, we will not win.”