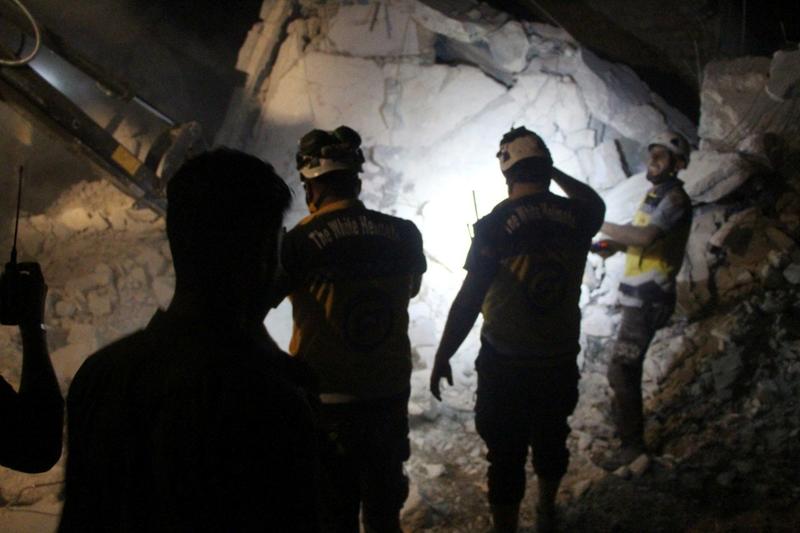 BEIRUT (Reuters) – Syria and its ally Russia have stepped up an offensive against the last big stronghold of Syrian rebels, mounting more air raids and deploying ground reinforcements including Iranian-backed militias, army defectors and residents said on Friday.

Syria Civil Defence (White Helmets) members search the rubble of a damaged building for victims, after a deadly airstrike, said to be in Maarat al-Numan, Idlib province, Syria August 28, 2019. Syria Civil Defence in the Governorate of Idlib/Handout via REUTERS

The Russian-led alliance is pushing into densely populated parts of Idlib province where millions of people who fled fighting elsewhere in Syria have taken refuge.

The northwest offensive has prompted U.N. warnings of a new humanitarian crisis amid the gains by Damascus and its partner Moscow, which has helped President Bashar al-Assad turn the tide in the eight-year-old conflict since intervening in 2015.

Moving deeper into territory adjoining the Turkish border, the advance took the town of Tamaneh after earlier capturing Khwain, Zarzoor and Tamanah farms, the defectors and residents said.

They were the first gains since the alliance, battling a coalition of jihadists and mainstream Turkey-backed rebels, seized a main rebel pocket in nearby Hama province last week.

The offensive has been reinforced by elite army units and Iranian-backed militias, the defectors and residents said.

Jets flying at high altitude dropped bombs on the outskirts of Idlib city, the heavily-populated provincial capital. The aircraft were believed to be Russian, according to activists who track the warplanes’ activities.

Rebel resistance has been eroded by relentless air strikes against civilian areas since the advance began in late April. The campaign has destroyed dozens of hospitals, schools and civil defense centers, paralyzing life in rebel-held areas.

Moscow and Damascus deny they have targeted civilians and say they are responding to militant attacks by the former Nusra Front, a jihadist alliance now known as Hayat Tahrir al-Sham that is the dominant force in Idlib.

Opposition sources say hundreds of troops from the country’s elite Republican Guards, which is led by President Bashar al Assad’s brother Maher al-Assad, have been deployed on the frontlines of southern Idlib province.

The rapid progress of the last few weeks has been attributed to the new lineup of Russian backed-forces, an army defector and two senior opposition sources conceded.

“The Russians have now moved to depending on the Iranians and elite army formations in this campaign,” Bakour added, saying this was a shift away from reliance on the so-called Tiger forces who previously provided most of the Syrian army’s ground troops.

Since capturing the strategic town of Khan Sheikhoun nearly 10 days ago, Russian and Syrian jets were now escalating strikes on the city of Maraat al-Numan that lies further north.

At least 12 civilians, including five children, were killed during raids on the now ghost city that has seen most of its over 140,000 inhabitants flee in the last few weeks.

More than half a million civilians have now been uprooted in the course of the offensive. The United Nations says hundreds of civilians have been killed in the violence, which has resulted in large scale destruction of civilian areas.