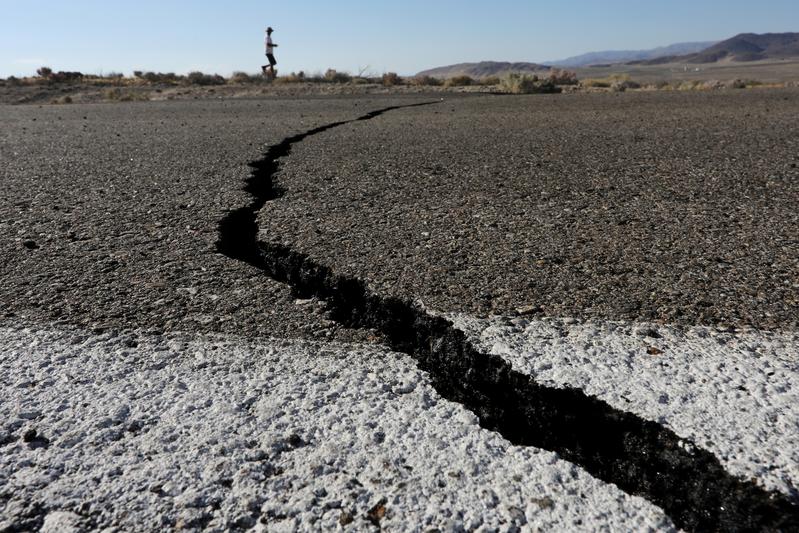 AMSTERDAM (Reuters) – A growing majority of U.S. Republicans, especially younger voters, are worried that human behavior is damaging the planet, according to a survey of global attitudes to the environment conducted by an Amsterdam-based polling agency.

FILE PHOTO: Fissures that opened up under a highway during a powerful earthquake that struck Southern California are seen near the city of Ridgecrest, California, U.S., July 4, 2019. REUTERS/David McNew

President Donald Trump, a Republican, has said he will pull the United States out of the 2015 Paris climate accord involving nearly 200 countries and has reversed environmental protections put in place by his Democratic predecessor Barack Obama.

Trump skipped a meeting on climate change during last weekend’s G7 summit in France and said he would not let “dreams” undermine U.S. dominance in fossil fuel production.

The new report by Glocalities, which canvassed views worldwide, showed the number of U.S. Republicans who said they “agreed” or “strongly agreed” with the statement “I worry about the damage humans cause the planet” rose by 11 percentage points to 58% between 2014 and 2019.

The number of Republican voters aged 18-34 who are worried about the issue rose by 18 percentage points to 67%, said the poll, which also showed a 10 percentage point increase among all U.S. Republicans who said they tried “to live eco-consciously”.

“When looking deeper into the data it becomes clear that the highest rise in environmental concern (worldwide) is visible among younger Republicans,” said Glocalities pollster Martijn Lampert, who predicted that shifting views on the environment would influence the next U.S. election in 2020.

“If Donald Trump keeps on denying climate change and refrains from standing up for the environment he won’t be able to increase support among the young and be heavily reliant on older generations of Republican voters for winning again,” Lampert said.

“It will be very hard for him to broaden his base.”

The survey showed concern about the environment among U.S. Democrat voters at 83%, up nine percentage points, ahead of the 2020 presidential election.

In the United States overall, 69% of people canvassed said they backed the statement about human beings harming the planet, up 8 percentage points.

In all 20 countries that took part in the survey – including Germany, China, France, Britain and Brazil – the average level of concern stood at 77%, up 6% since 2014.

A wave of youth-led climate activism has erupted in many parts of the world this year, partly inspired by Swedish teen activist Greta Thunberg, who arrived in New York on Wednesday in a sailing vessel ahead of a U.N. summit next month to discuss global warming.

A Reuters/Ipsos poll in December found that 69 percent of Americans believe the United States should work with other nations to curb climate change, including 64 percent of Republicans and 80 percent of Democrats.

Those findings were rejected by Trump. The White House said the report relied on faulty methodology and that the next assessment of the threats posed by climate change would be more transparent and data driven.