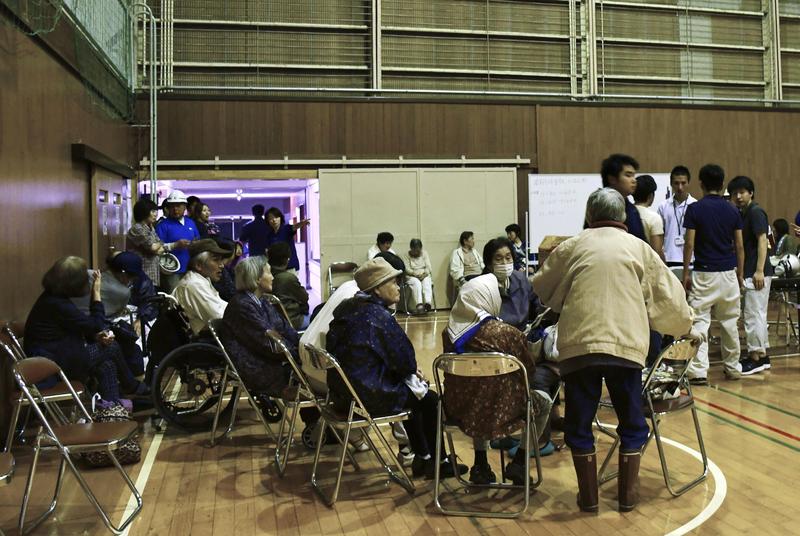 Residents who were evacuated from their homes after an earthquake are seen at a gymnasium of Iwafune junior high school acting as a makeshift evacuation center, in Murakami, Niigata prefecture, Japan June 19, 2019, in this photo taken by Kyodo. Mandatory credit Kyodo/via REUTERS

The magnitude 6.4 quake, according to the U.S. Geological Survey (USGS), lasted for as long as 20 seconds and damage included a landslide that struck a road, according to public broadcaster NHK. There were no initial reports of fatalities or fires.

Authorities lifted a 0.2-1.0 meter tsunami warning for the region after waves several centimeters high struck parts of the Niigata coast.

A tsunami of up to one meter could have caused some flooding and damage in low-lying coastal areas and river banks, though much of Japan’s coastline is guarded by sea walls.

“We will work closely with local authorities to provide any disaster measures including lifesaving and rescue operations and have instructed officials to provide information in a timely and accurate manner,” Chief Cabinet Secretary Yoshihide Suga – the top government spokesman – told a media briefing.

It measured 6.7 according to the Japan Meteorological Agency, and in some places was as high as a strong six on the agency’s seven-point “Shindo”, or Seismic Intensity Scale, which measures ground motion at specific points unlike magnitude which expresses the amount of energy released.

Tokyo Electric Power Co’s (Tepco) Kashiwazaki-Kariwa nuclear plant was not affected by the quake, which hit 85 km ( 53 miles) northeast of the site. All of its seven reactors were already shut down, NHK said.

A Tepco spokesman said an initial inspection showed no damage to the plant, and inspectors would carry out more detailed checks.

The quake also temporarily halted express bullet train services in the region, with some roads also closed, according to NHK.