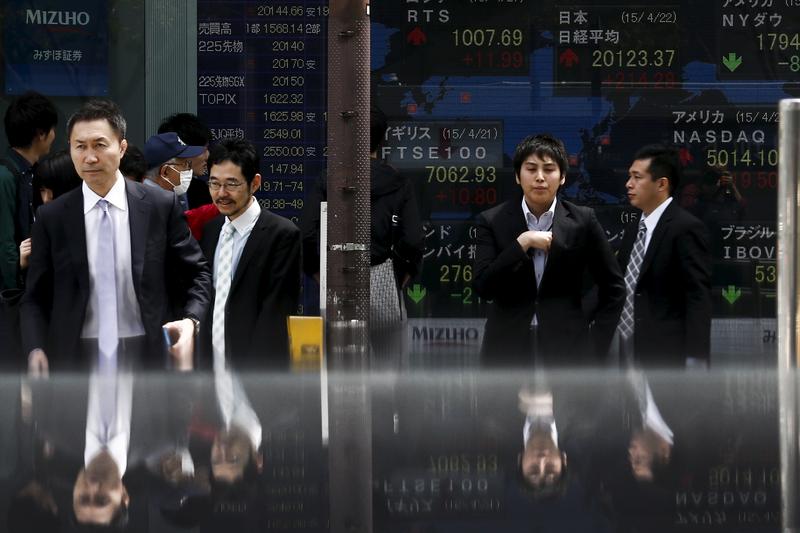 LONDON (Reuters) – European shares followed Asian stocks higher on Monday after the United States shelved plans to impose tariffs on Mexico and as investors anticipated lower U.S. interest rates when the Federal Reserve meets next week on the back of poor jobs data.

Investors had fretted that opening up another trade conflict, while still battling with China, could push the United States and other major economies into recession. The Mexican peso rallied as much as more than 2% on Monday.

But in China, the yuan slipped to its weakest this year after the country’s imports fell the most in nearly three years and as talks to end the Sino-U.S. dispute remained deadlocked.

Liquidity was lower than usual with markets in Germany, Switzerland, Sweden, Norway, Denmark and Iceland shut for national holidays.

In Asia, Tokyo’s Nikkei closed up 1.2%, while MSCI’s index of Asia-Pacific shares outside Japan rose as much as 1%.

“There will be relief that the [Mexican] tariffs have been avoided and perhaps some might believe it shows Trump’s propensity to strike deals after brinkmanship. As such there may be those thinking that a similar thing might happen with the China trade situation.”

The European auto sector was boosted by signs that Fiat Chrysler Automobiles NV and Renault SA were looking for ways to revive their collapsed merger plan and secure the approval of Nissan Motor Co. Fiat Chrysler was up 1.9%, while Renault’s shares were up 2.5%.

In London, Thomas Cook’s shares rose as much 20% after a report that Hong Kong-listed Fosun Tourism was in talks to buy its tour operating business as the British group faces breakup after issuing three profit warnings in the past year.

Investors were also digesting Chinese data showing imports in May contracted 8.5% from a year earlier, a much worse than expected outcome that signaled weak domestic consumption.

Exports, however, unexpectedly rose 1.1% last month, though many suspect the uptick is linked to front-loading of shipments by firms to avoid higher U.S. tariffs.

“Mexico is not China and investors will want to see some clear signs of improvement in U.S.-China relations before increasing exposure to risk assets. Before then the market is left focusing on poor Chinese import figures for May…..as speculation builds over whether the PBOC [the People’s Bank of China] allows yuan to trade through 7 per dollar,” said Chris Turner head of FX strategy at ING Bank.

With the Mexico spat seemingly resolved, investors will now focus on whether U.S. President Donald Trump can reach a similar deal with China.

“With Trump looking to win votes to secure a second term, an agreement with China will go some way to smoothing the path and he’ll be focusing on that,” said Peter Lowman, chief investment officer at Investment Quorum. “There’ll be a lot of fudging and saber-rattling but when that happens there’ll be an aggressive spike-up in stocks.”

EYES ON THE FED

In the United States, expectations the Federal Reserve will cut rates kept the dollar on the defensive after a weak jobs report from the U.S. Labor Department.

Nonfarm payrolls increased by 75,000 jobs last month, much smaller than the 185,000 additions estimated by economists in a Reuters poll.

Fed funds rate futures prices, down on Monday after the Mexico deal, were still pricing in more than two 25-basis point rate cuts by the end of this year, with one almost fully priced in by July.

The Federal Reserve’s next policy meeting is set for next week, on June 18-19.

The euro pulled back from 2-1/2 month highs as the dollar strengthened and after sources said European Central Bank policymakers were open to cutting the ECB’s policy rate should economic growth worsen.

China’s yuan touched its lowest since late November after weak import data reignited worries about slowing domestic demand. The offshore rate was slightly lower at 6.9532 yuan per dollar but held above Friday’s 2019 low.

Many investors are still clinging to hopes that Trump will meet his Chinese counterpart Xi on the sidelines of the Group of 20 leaders’ meeting late this month to seek a compromise on trade and other economic issues.