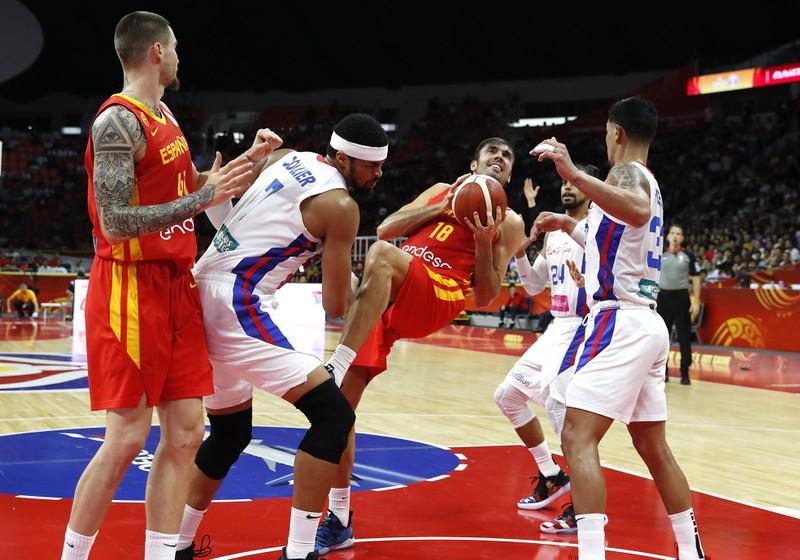 BEIJING (Reuters) – Spain celebrated their second successive win at the basketball World Cup in China after a commanding performance from their Toronto Raptors centre Marc Gasol gave them a 73-63 win over plucky Puerto Rico on Monday.

Serbia, the tournament favourites alongside holders United States, also made it two out of two with a 126-67 demolition of the Philippines while 39-year-old forward Luis Scola rolled back the years in Argentina’s 94-81 defeat of Nigeria.

Spain struggled against a physical Puerto Rican side in the first half before Gasol, who won the 2019 NBA title with the Raptors, nailed 11 points in the third quarter for the 2006 world champions.

Gasol finished with a game-high 19 points, Phoenix Suns playmaker Ricky Rubio added 17 and guard Sergio Llull netted all of his nine points in the second half as Spain pulled away after carving out a slender 36-35 halftime lead.

Scola, who moved to China in 2017 after a 10-year career at five different NBA clubs, amassed 23 points and 10 rebounds as Argentina overpowered the Nigerians.

“We knew it would be a tough game because Nigeria are a strong and fast-paced team,” Argentina coach Sergio Hernandez told reporters.

“One of the best things we did was to stop their fast breaks in the third quarter.”

A slow start by Serbia allowed the Philippines to take an early 9-7 lead but the 2014 tournament’s runners-up quickly got into their stride and engineered a 62-35 lead at halftime.

The Serbians, also the 2016 Olympic silver medallists, racked up 37 team assists and as many rebounds with their Sacramento Kings duo Nemanja Bjelica and Bogdan Bogdanovic running the show.

Power forward Bjelica netted all his seven shots from the floor for a game-high 20 points and shooting guard Bogdanovic added 17, while Denver Nuggets centre Nikola Jokic chipped in with 11 points, seven assists and seven rebounds.

“Our players did their job,” said Serbia coach Aleksandar Djordjevic, a former European champion and World Cup winner as a player.

“The next game (against Italy) is going to be more crucial so we’re preparing our players for that. Bjelica coming back (from a knee injury) is also a very good sign for us.”

The Italians brushed aside Angola 92-61 and Tunisia revelled in their first-ever World Cup victory after downing Iran 79-67 on the back of 22 points and 15 rebounds by towering centre Salah Mejri.

Poland ground out a 79-76 win over hosts China, Russia eased past South Korea 87-73 and Venezuela kept alive their hopes of reaching the second group stage of the 32-nation tournament with an 87-71 defeat of Ivory Coast.

Tuesday’s standout fixtures feature a clash between the United States and Turkey and a mouth-watering contest between Lithuania and Canada.