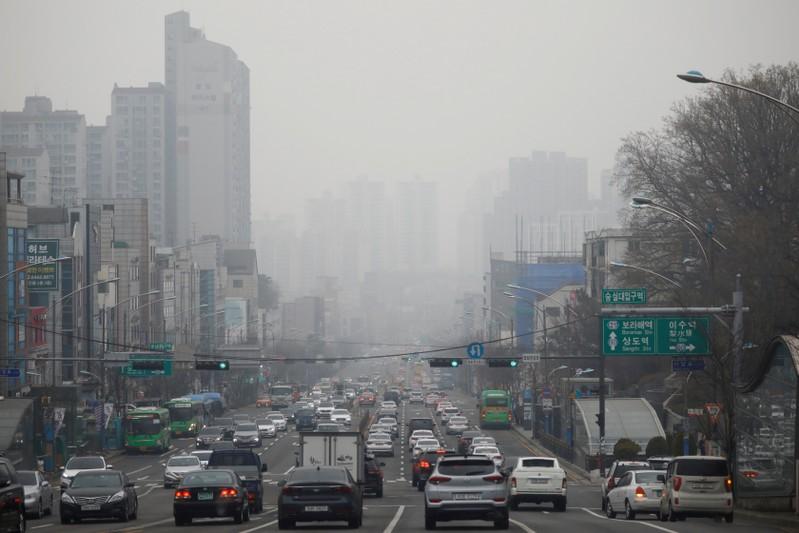 SEOUL (Reuters) – As renewable energy powers up in South Korea, coal-fired generation, long the bedrock of the country’s electricity supply, is being tapped to give up room.

Facing choking smog in its major cities and under pressure to meet emission reduction targets, the world’s fourth-biggest coal importer is expected to accelerate targets for green energy in an updated 15-year energy plan later this year.

Long seen as a laggard with Japan in moving away from coal, the government now looks set to close some 20 ageing coal-fired generators and broaden operating caps at others, say advisers and energy experts.

“We have a big challenge ahead to reduce carbon emissions. To some degree, we could do it by expanding renewable power but that won’t be enough to cut emissions so we need to think about reducing coal power and weigh the costs of that change,” said Park Jong-bae, professor of electrical engineering at Konkuk University.

South Korea began its transition to cleaner energy in a 2017 power supply plan that aimed to boost the share of renewables from about 6% to 20% by 2030, while scaling back coal and unpopular nuclear.

Amid public anger, the government in March designated pollution a “social disaster”, and a month later pledged to boost renewable energy to up to 35% of total energy supplies by 2040.

The 2019 energy plan is expected to reflect the push for even more renewables and more gas-fired power at the expense of coal, imported from countries such as Indonesia, Australia and Russia.

Coal imports fell nearly 9% in the first four months of 2019 when coal’s share of the country’s energy mix fell by more than 5 percentage points to around 37%, although most of the slack was taken up by nuclear, rather than renewables. Nuclear energy, spurned in the wake of Japan’s 2011 Fukushima disaster, is set to fall by 2030 as older plants close.

Over the next 15 years, the government had initially planned to retrofit some 20 of these with anti-pollution gear when they reached 30 years of age in a bid to extend their operating lifespan, but this has been shelved.

A “shared understanding” has emerged that “retrofitting is not that cost-worthy,” said Seok Kwang-hoon, a member of the government’s power supply plan working group and an adviser at civic group Green Korea.

The energy ministry has told state-run utilities to put retrofitting plans on hold, added an industry source familiar with the matter, who asked not to be named.

However, the change comes even as seven new coal-fired plants are set for completion by 2022. Coal-fired capacity will rise in coming years before easing by 2030, suggesting the government will have to take further measures to reduce coal’s share of energy output.

“To have more renewable power, we can make coal power plants run lower,” said Kang Seung-jin, energy professor at Korea Polytechnic University, who is helping to map out the 2019 plan.

The government last year introduced caps on coal-fired generation, halting operations at five plants from March to June to curb pollution and it has done the same this year for four plants.

Still, South Korea is facing a tough task to boost renewables and meet its planned carbon emission cuts under the 2015 Paris climate accord.

The country scores poorly with green groups on its efforts so far to tackle climate change, with the independent Climate Change Performance Index released at last year’s climate talks in Poland putting it 57th out of 60 countries that were rated.

To meet its targets, South Korea would have to cut coal’s contribution to its energy mix by 10 percentage points, or about a quarter, and replace it with more expensive gas, a government adviser told Reuters.

Funding such a sharp drop in coal would be extremely expensive, said the adviser, who asked not to be identified, adding that it “could hike electricity bills so it’s a challenge for us to work on.”

“Coal … will eventually decrease to a level slightly below 30% (of Korea’s total power) by 2040,” said Wood Mackenzie adviser Zi Sheng Neoh, although he cautioned that this depended on the availability of other energy sources.

Some experts are also wary of closing down old coal plants.

“A strategy for increasing renewables does not necessarily mean lowering coal power,” said Jeon Chung-hwan, professor of mechanical engineering at Pusan National University. “I’m not saying we should have more coal power, but we should leave some room to support renewables.”