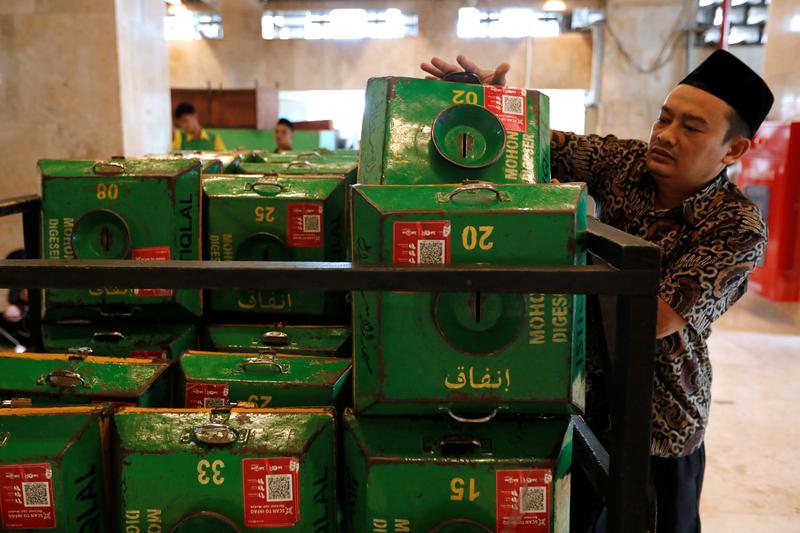 JAKARTA (Reuters) – Like millions of other Indonesians, Gandi Iswara had for years carried a wad of currency notes for dropping into donation boxes after prayers at mosques in suburban Jakarta.

FILE PHOTO: A volunteer collects alms boxes with QR codes and stacks them on a cart after Friday prayers at Istiqlal mosque in Jakarta, Indonesia, February 14, 2020. REUTERS/Willy Kurniawan

From late last year, though, the 35-year-old engineer switched to a more convenient option: whipping out his mobile phone, firing up a digital payment app from Google-backed GoPay and tapping the QR code stickers that are now affixed to the boxes.

His digital conversion took some time, as Iswara initially held the view that all rewards and discounts offered by e-wallets conflicted with Islam.

“At first, I thought e-wallets resulted in usury, which is forbidden by Islam. But after a while I found them convenient in daily life,” he said.

Winning over conservative Muslims like Iswara in the world’s most populous Muslim-majority country is both a challenge and multi-billion dollar opportunity for fintech firms that are riding its mobile internet boom and aim to sell financial services.

Of Indonesia’s 270 million population, half lacks bank accounts but most now have mobile phones.

Questions about compliance with Islamic law are a significant hurdle for the adoption of digital payments and other fintech services, industry executives say.

Known as Sharia, the law strictly prohibits charging interest, or “riba”, and clerics in Indonesia disagree on whether the popular cashback rebates and discounts given by digital wallets qualify. Social media videos in Indonesia on whether e-wallets are “haram” – prohibited by Islam – or incorporate “riba” rack up hundreds of thousands of views.

To showcase the compliance of their services with Islam, fintech firms are organising forums with Islamic scholars and sponsoring religious festivals. Newer startups are tailoring services for Indonesia’s growing body of “born-again” Muslims, known as the “hijrah” movement at home.

GoPay, which is part of ride-hailing firm Gojek, has partnered with the Indonesian Mosque Council since November to enable digital donations, including “zakat”, or compulsory alms giving, in its 800,000 mosques, CEO Aldi Haryopratomo said. “Zakat” alone amounts to over $500 million annually in Indonesia.

“It has made it much easier for people to pay alms,” said Budi, chief administrator of Jakarta’s Istiqlal mosque, the largest in Southeast Asia, referring to digital payments services.

Rival LinkAja, which was formed by a consortium of Indonesia’s top state-owned firms, has launched similar donation efforts. It is now readying LinkAja Sharia, which will offer a range of financial services specifically targeted at conservative Muslims and only accept money from Islamic banks.

Backed by companies including telco Telkomsel and Bank Mandiri, LinkAja is currently seeking to raise $200 million in outside financing, sources told Reuters. The company declined to comment on its funding.

The scale of ‘sharia-fintech’ in Indonesia is small, so far, with Islamic fintech startups disbursing about 1 trillion rupiah ($73.15 million) in sharia-compliant loans in 2019, a four-fold increase from 2018, according to the Indonesia Sharia Fintech Association.

But with all forms of Islamic banking accounting for only 6% of Indonesia’s $580 billion in banking assets, there is room for growth.

The sector is also getting a policy push. The country’s vice vice-president, cleric Ma’ruf Amin, took over Indonesia’s National Islamic Finance Committee in January and has cited the growth of Islamic fintech as a key national priority.

Some of the startups say they are finding their appeal extends beyond Muslims.

One of them is peer-to-peer lender ALAMI, created by three ex-bankers, which has disbursed over $7.5 million in sharia-compliant financing to small and medium enterprises since May, and plans to become a digital bank.

CEO Dima Djani said that although conservative Muslims are its main target, others also are choosing it as an ethical banking option.

“They see the fact we are focused on sharia principles as a sign of integrity,” he told Reuters.

“Many of our customers are from other religions,” he said. “Some people tell us that sharia is not only for Muslims, it represents ethical financing.”