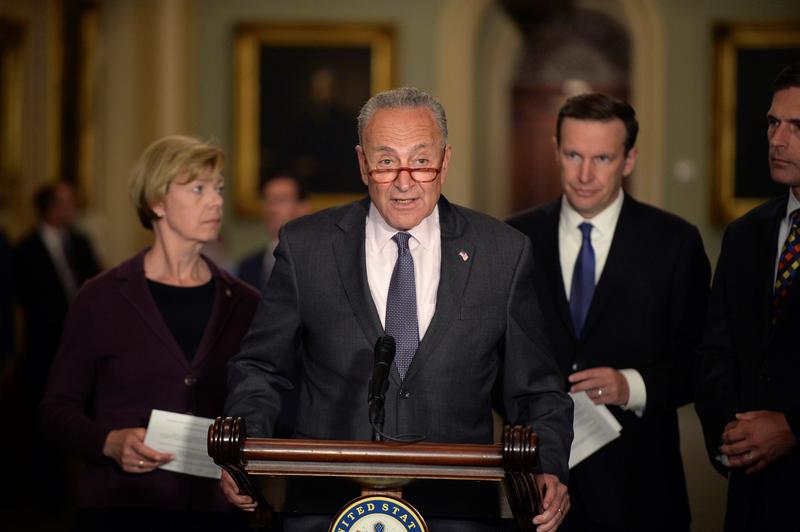 WASHINGTON (Reuters) – Two senior Senate Democrats on Wednesday asked President Donald Trump to withdraw his $5 billion request for border wall funding and use the money on initiatives to combat gun violence in the aftermath of back-to-back mass shootings in Texas and Ohio.

In a letter, Senate Democratic leader Chuck Schumer and Senator Patrick Leahy informed Trump that he does not have enough support in Congress for his wall funding request to be included in the federal budget for fiscal year 2020, which begins on Oct. 1.

“Instead, we urge you to support spending funds you have requested for the border wall, on other pressing needs such as proven initiatives that will address the threats of gun violence and white supremacist extremism in America,” wrote Schumer and Leahy, who is the top Democrat on the Senate Appropriations Committee that oversees government outlays.

The request, which was expected, surfaced as Democrats in the Senate and House of Representatives are trying to pressure Senate Republican leader Mitch McConnell to call the Senate back early from its August recess and allow votes on universal background check legislation that passed the House in February.

House Speaker Nancy Pelosi said on Wednesday that public pressure should force McConnell to bring the House legislation up for a vote and said her chamber would soon move forward with new gun measures including a ban on high-capacity gun magazines.

The Democratic push on gun control follows mass shootings in El Paso, Texas, and Dayton, Ohio, that killed 31 people and propelled the wide availability of guns in the United States back to the forefront of political debate.

Trump has called for congressional action on guns but has sent mixed messages on the kind of legislation he would sign. He has appeared at times to endorse expanded background checks but has also shifted his focus to mental illness, violent video games and “red flag” incentives for states to deny guns to people deemed a danger to themselves and others.

McConnell has declined to call the Senate back early and instead has instructed the chairs of three Senate committees to work on legislation that can be debated when lawmakers return from their recess on Sept. 9.

The House Judiciary Committee, which has jurisdiction over gun restrictions, is expected to return from its summer break a week early to work on new legislation.