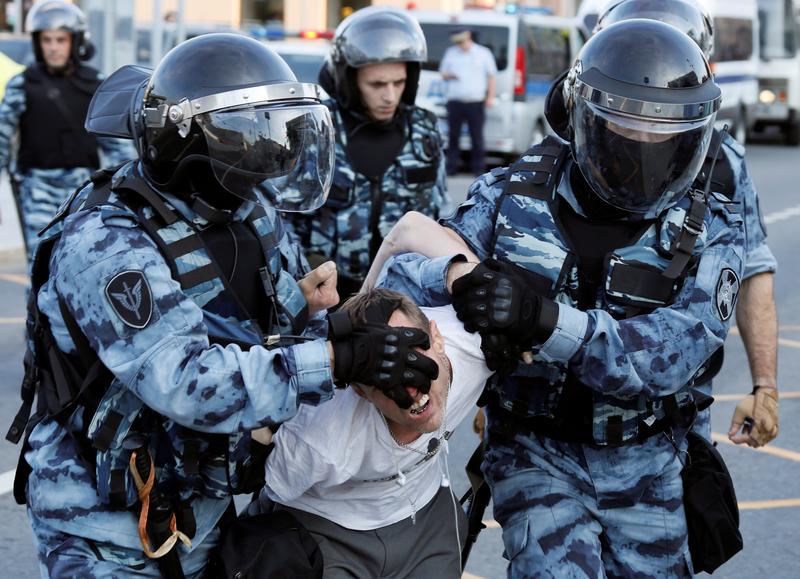 MOSCOW (Reuters) – Bruised Russian teenager Alexander Kostyuk spent three days in hospital being treated for concussion he said he sustained on Aug. 3 when four policemen beat him with truncheons at an opposition protest in Moscow.

It was the second peaceful demonstration in as many weeks by an increasingly defiant opposition to President Vladimir Putin. Both were met by police in riot gear who detained hundreds of protesters, sometimes violently. In some cases, they beat people as they lay on the ground.

A new protest, again to call for free elections in Moscow, is planned in the Russian capital on Saturday.

Kostyuk was among more than 2,300 people detained on July 27 and Aug. 3 in one of the biggest opposition crackdowns in Russia in recent years. He spent several hours in custody like most, and was hospitalized from the police station for his injuries.

“The four of them forced me to the ground and started to beat me up … They hit me around the head with truncheons and their fists,” Kostyuk, 17, said of the police officers who detained him.

It is unclear how many people were injured during the two protests, but at least 15 of them have filed complaints against the police, according to independent rights groups.

The original focus of protesters’ anger was a prohibition on a number of opposition-minded candidates from taking part in a September election for Moscow’s city legislature.

Activists say the constitution allows them to freely protest. But authorities say the timing and location of any demonstrations must be agreed in advance, something that was not done for either protest which police have called mass unrest.

“At what was a peaceful protest police used brutal force against everyone, and I don’t know a single case when this use of force was justified,” Fyodor Sirosh, Kostyuk’s lawyer said.

Moscow Mayor Sergei Sobyanin and other officials have said that the amount of force used during the July 27 protest was appropriate and that what he called the reckless actions of some protesters had forced the police to respond.

“It was like a gang of thugs who attack you in a backstreet out of the blue and thrash you, but in this case the thugs were dressed in uniforms,” another injured protester, Andrei Kurgin, said about his experience on Aug. 3.

Kurgin, 37, plans to go to court to prove he was gratuitously and violently attacked by the police.

Konstantin Konovalov, who lawyer Sirosh is also representing, had his leg broken during his detention in central Moscow on July 27 ahead of the protest. He said he was out jogging with no intention of joining the protest when police grabbed him and broke his leg while detaining him.

Andrey Statov, another injured protester, says he was beaten by police after being detained on Aug. 3 while peacefully standing among other protesters.

Both Kurgin and Statov say they plan to take part in a new protest scheduled for Aug. 10, which was authorized by authorities.

“I feel some fear, and to be honest this fear has grown but I will try to keep up my support (for the protests),” said Statov.