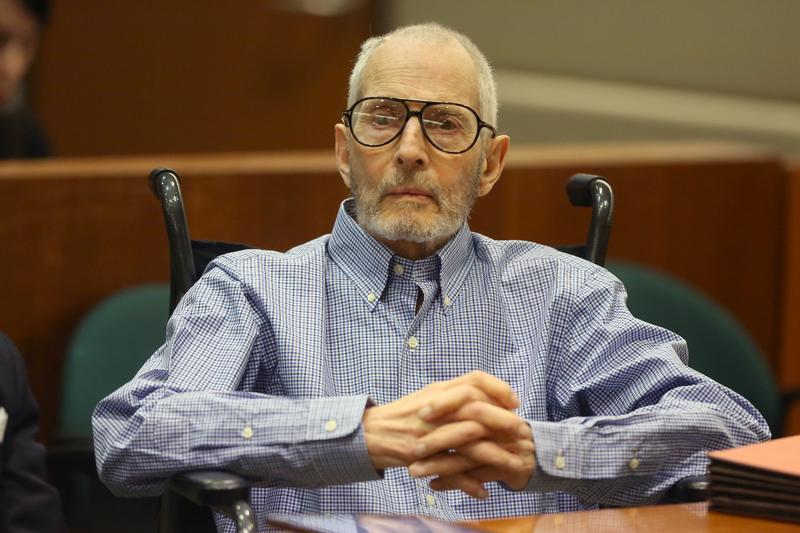 LOS ANGELES (Reuters) – Robert Durst, the ailing New York real estate scion whose arrest prosecutors say was hastened by his confession to multiple killings in a 2015 TV documentary, was due to face a jury on Wednesday for opening statements in his Los Angeles murder trial.

Durst, 76, is charged with the December 2000 murder of his long-time confidant, Susan Berman, a writer he is accused of fatally shooting because of what she might have known about the unsolved disappearance and presumed killing of his wife two decades earlier.

The Los Angeles County District Attorney’s office said prosecutors planned to deliver opening statements on Wednesday, after the judge and attorneys for both sides spent two weeks selecting 12 jurors and 12 alternates for a trial expected to last about five months.

Durst, confined to a wheelchair and suffering from what his lawyers describe as a number of “severe” health problems, has pleaded not guilty. If convicted he faces a maximum sentence of life in prison.

Berman, 55, the daughter of an organized crime figure and author of the 1981 memoir “Easy Street: The True Story of a Mob Family,” was found slain execution-style in her Beverly Hills home.

Her death came a couple of months after police in New York were reported to have reopened an investigation into the fate of Durst’s spouse, Kathleen, who was a medical student when she vanished in 1982.

Durst, the estranged, multimillionaire grandson of a Manhattan real estate magnate, has insisted he had nothing to do with her disappearance. He was never prosecuted in the New York probe, which led to lurid tabloid coverage and a movie on the Lifetime channel.

The circumstances surrounding both cases, as well as Durst’s 2003 acquittal in the killing and dismemberment of an elderly Texas neighbor, gained wide attention in a 2015 Emmy-award winning HBO documentary “The Jinx: The Life and Deaths of Robert Durst.”

The prosecution’s theory is that Durst killed Kathleen Durst at their cottage outside New York City in January 1982, and that Berman helped cover it up, going so far as to place a telephone call pretending to be Durst’s wife to help facilitate his alibi. No body was ever found.

Durst is accused of killing Berman to silence her as a potential witness against him when the case was reopened.

Durst was arrested on suspicion of Berman’s murder in March 2015, one day before the airing of the final episode, in which Durst seemed to incriminate himself after being confronted with a key piece of evidence.

He was captured by microphone after the interview muttering off-camera to himself: “There it is, you’re caught,” and “What the hell did I do? Killed them all, of course.”

In court papers filed months later, prosecutors said they had moved quickly to secure Durst’s arrest upon learning he had “confessed to killing multiple people” in the documentary and might try to run once “The Jinx” finale was broadcast.

In ordering Durst to stand trial, the judge said in 2018 that Durst’s “cryptic” remark caught on mic “operates as a succinct confession” absent an explanation from the defendant.

Durst told authorities shortly after his arrest that he smoked marijuana daily and was under the influence of methamphetamine during his interview for “The Jinx.”

The prosecution’s evidence includes a cryptic note Durst is accused of having mailed to police after Berman’s murder anonymously notifying them of a “cadaver” at her address.

The envelope misspelled Beverly Hills as “Beverley Hills,” a quirk “The Jinx” filmmakers found on another envelope they said Durst has once sent to Berman.

Defense attorneys have argued that prosecutors lacked any physical evidence such as fingerprints or DNA evidence linking him to the murder scene.