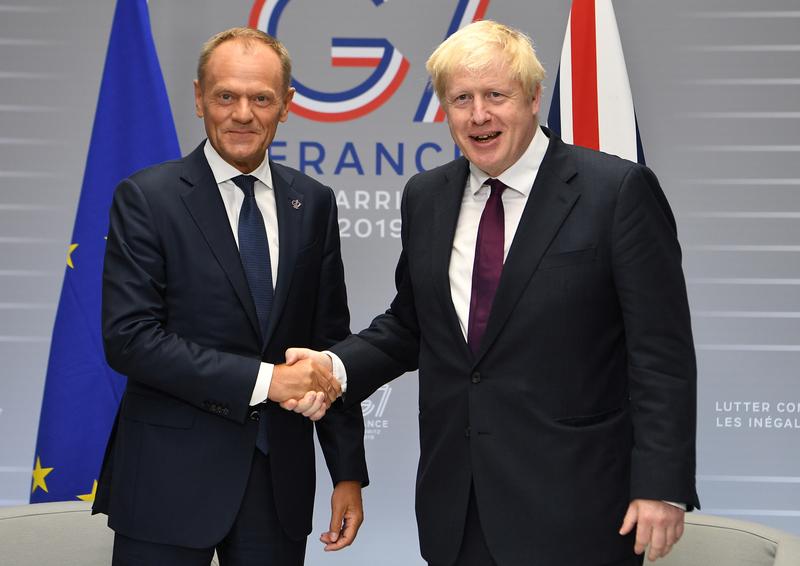 BIARRITZ, France (Reuters) – Prime Minister Boris Johnson said on Sunday that if Britain leaves the European Union without a deal, it will no longer legally owe the 39 billion pound divorce bill agreed by his predecessor Theresa May.

Earlier British media reported Johnson would use a meeting with European Council President Donald Tusk on the sidelines of the G7 Summit to set out that Britain would pay less than 10 billion pounds of the settlement if it leaves without a deal.

Sky News said the figure was 9 billion pounds, while the Sunday Times reported British government lawyers had concluded the amount Britain was legally obliged to pay could be as low as 7 billion pounds.

“I think what the entire European Union understands is that if we come out without a deal then…the 39 billion is no longer legally pledged,” Johnson told Sky News, when asked if he had told EU leaders this week he planned to withhold the money.

“As I’ve said many, many times we will therefore on November 1 have very substantial sums available from that 39 billion to spend on supporting our farmers…and indeed for investment in all sorts of areas.”

In June, a source close to French President Emmanuel Macron said that failing to pay the Brexit bill would amount to a sovereign debt default and on Wednesday an official in his office said that leaving without a deal would not remove Britain’s obligation to pay.

“There is no magic world in which the bill no longer exists,” the French official said on Wednesday.

The EU has repeatedly said it will not start negotiating a new trade deal with Britain before the issues of money, the Irish border and citizens rights are settled, so it is likely to return to the fore as a precondition for the EU to start trade talks after Brexit if Britain refuses to pay.

Ahead of their meeting on Sunday, Johnson and Tusk traded barbs over who would be to blame should Britain leave without a deal at the end of October.

Reporting by Wiliam James in Biarritz and Kanishka Singh in Bengaluru, Writing by Kylie MacLellan, Editing by Paul Tait