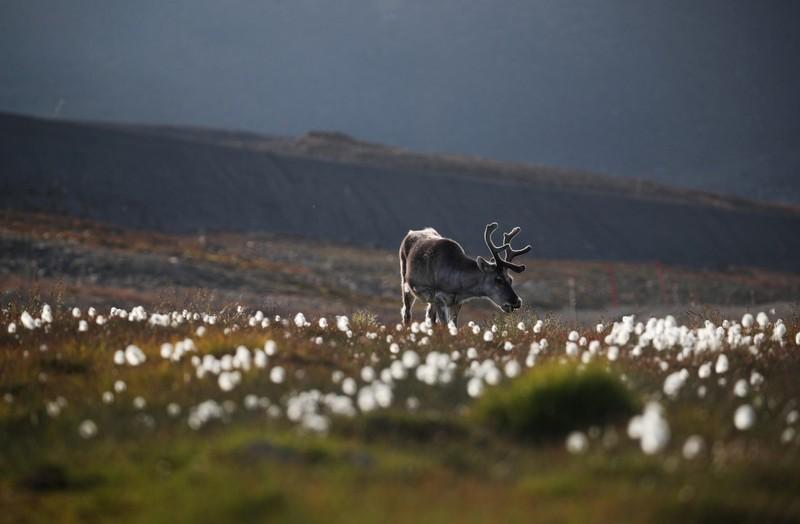 SVALBARD, Norway (Reuters) – Icebergs float liked doomed islands past the small boat as it makes its way through a fjord filled with the slush of a melting glacier. Occasionally, as the warming waters dissolve the bottom of one of the icebergs, it becomes top-heavy and does a somersault, as if it were playing instead of dying.

The Wahlenberg glacier above the fjord naturally calves, sheering off icebergs into the water. But here it is happening at an increasing rate because of warming waters, says Kim Holmen, the international director of the Norwegian Polar Institute.

Holmen, wearing a woolen hat with a hot-pink pom-pom against the chill of an Arctic summer day, has lived in the northern Norwegian archipelago of Svalbard for three decades. He describes the changes he’s seen as “profound, large and rapid.”

“We are losing the Svalbard we know. We are losing the Arctic as we know it because of climate change,” he says amid the constant crackle and trickle of the ice dissolving. “This is a forewarning of all the hardship and problems that will spread around the planet.”

Since 1979, the Arctic sea ice extent has declined by nearly 12% per decade, with the most pronounced winter reduction in the Svalbard and Barents Sea area.

That’s not good news for Svalbard’s main town, Longyearbyen. With a population of slightly more than 2,000 people, it is the northernmost town on the planet.

It is also the fastest-warming.

A GRAVEYARD IN HARM’S WAY

Rows of simple white wooden crosses cling to a hillside over Longyearbyen, a sparse cemetery that appears vulnerable even on a sunny day in August.

Ivar Smedsroed is the summer vicar at Svalbard Church, a red wooden building with white trim and a weathervane-topped bell tower. Inside the Lutheran house of worship, which claims to be the world’s northernmost church, stained glass paints the snow-topped mountains nearby in a pastel hue.

The pastor has only been here for the summer, but in that short time he has already learned of people’s fears about the effects of a rapidly changing climate.

One such effect is a thawing of the permafrost beneath his feet at the graveyard, which he calls “a place of memories, a place of remembrance.”

“As the permafrost thaws, things that are in the ground tend to be pulled up,” Smedsroed says matter-of-fact as he sits on the ground near the graves. “That is happening more or less all of the time, so we might see that the graves literally come up, the coffins.”

There has been talk of relocating the graveyard after a landslide missed wiping it out by meters in October 2016. Nearly three years later, slabs of rock form a slash in the landscape just beyond the graves.

“Because of climate change and the difference that makes to the soil and the ground, some of the graves that we see behind us might end up actually sliding into the road,” says Smedsroed, whose gray hair matches the woolen sweater beneath his white collar. “Or the next thing that we could see is that they might all be covered in the next big landslide coming down the hill.”

AVALANCHES AND THE ABYSS

Thawing permafrost isn’t just a problem for the dead: It has caused problems for current residents of Longyearbyen too.

A reindeer grazes on land in the town of Longyearbyen in Svalbard, Norway, August 4, 2019. REUTERS/Hannah McKay

Houses in the valley are built on small wooden stilts instead of deep foundations. Softening ground can lead to collapses, landslides and avalanches, and the houses here are no match for them.

“It was the middle of the night, and nobody knew what was coming,” Longyearbyen resident Anna Boegh says near the site where the houses once stood.

“This was thought to be an incredibly uncommon event, but two years after, in 2017, there was another avalanche, says her partner, Erik Holmund.

No one died in that avalanche, but several houses were swept away.

“It was a wake-up call since it happened very quickly,” she says. They returned the following spring and had to relocate the cabin 80 meters from the shore.

The ground beneath Svalbard has proven deadly elsewhere. Wieslaw Sawicki’s son Michal worked as a geophysicist at the Polish Polar Research Station in Hornsund on the southern side of Svalbard. The Polish scientist and meteorologist Anna Górska died when they fell from a mountain in May.

Michal, 44, was an experienced mountaineer, scientist and explorer on his fifth stint for the institute in the Arctic. Founded in 1957, it conducts year-round research and is the northernmost permanent Polish scientific institution.

“Unfortunately, there was a huge snow cornice which looked like it was part of the peak of the mountain,” says Sawicki, who was visiting Longyearbyen last month to meet with the governor of the archipelago. “It collapsed with them; they both fell into the abyss.”

He talks about how Michal would send letters home to Poland talking about the beauty of Svalbard.

“He would interestingly describe the changes that were happening here, how the glaciers were melting, how during each stay you could see the temperature rising and how the natural environment was changing,” he adds, holding back tears.

A SLEDDER WORRIES ABOUT HIS DOGS

When the dogs in the yard see Salte, they excitedly jump up, hoping to go out for a run. During the summer, with no snow on the ground, the dogs pull sleds on wheels along the bumpy gravel road, rattling past the few cars on the island.

Salte worries that as temperatures warm, climate change could lead to the extinction of all life on Earth. A man who likes kissing and dancing with his dogs – he has 110 of them – he’s concerned most about the nonhumans on the planet.

“If climate change should be the end of humanity, I really don’t care, but if climate change is the end of any animal species who hasn’t contributed anything towards the speeding up of this process, that’s why I am reacting,” he says.

Gesturing with a nod towards his dogs, he says: “It’s just unfair to anyone that doesn’t have a say in what is happening – the dogs, seals or polar bears or birds in the sky. That’s why it is unfair, and that is why we should do something.”

He compares climate change to an accident that we can’t help staring at, feeling lucky we weren’t the victim: