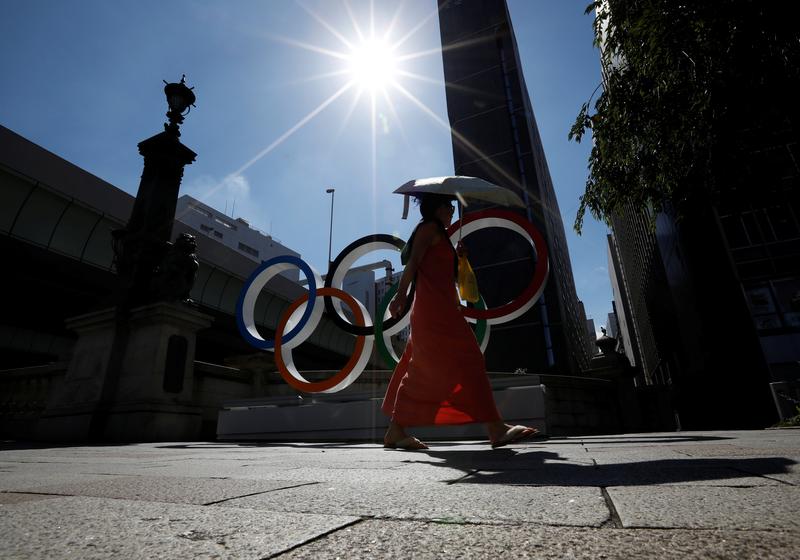 TOKYO (Reuters) – A worker at a Tokyo Olympics construction site died on Thursday after being found unconscious while working outside, organizers said on Friday, with media saying heatstroke was suspected as the Japanese capital swelters through a deadly heatwave.

Soaring temperatures have killed at least 57 people across Japan since late July, just a year before Tokyo hosts the 2020 Games, highlighting the possible health threat to athletes and fans that is one of the biggest challenges for Olympics planners.

A 50-year-old construction worker who’d been laying cable outside Tokyo Big Sight, which is being renovated to serve as the media center for Tokyo 2020, was found unconscious on the ground on Thursday afternoon and taken to hospital, where his death was confirmed, Tokyo 2020 organizers said in a statement.

“While at this stage the precise cause of his death remains unknown, local police confirmed it was not necessary to proceed with a criminal investigation,” organizers told Reuters in an email.

Police quoted by national broadcaster NHK said conditions at the site suggested heatstroke may have been the cause, but police declined to confirm the report to Reuters. Temperatures in Tokyo hit 35.5 Celsius (96 Fahrenheit) on Thursday.

Temperatures in Tokyo have clung above 31 degrees Celsius (88 Fahrenheit) since July 24, exactly a year before the Games are set to open, with the heat intensifying in August to average daily highs of 34.8 Celsius (94 Fahrenheit).

At least 57 people died across Japan from the heat between July 29 to Aug. 4 and 18,347 were taken to hospital. Some 45 people have died in Tokyo alone since Aug. 1, NHK said, many of them elderly living on their own.

Tokyo 2020 organizers said they are reiterated pleas to all those working on Games venues to take the right precautions.

“Today we instructed all construction companies under contract to Tokyo 2020 to ensure they properly implement and manage all appropriate health and safety measures at their workplaces,” said Games bosses.

“We will continue to ask them to ensure thorough safety in their operations to avoid any possible accidents.”

“At the construction sites, the contractors have set up rest rooms equipped with air-conditioning and provided water coolers, ice makers, salt candy and other items,” they added.

“We will continue to instruct contractors to implement and manage all appropriate health and safety measures in order to prevent heatstroke at their workplaces.”

Tokyo Big Sight was operational on Friday for a comic book and anime convention, with thousands of fans braving the heat to queue and enter the venue.

Many wore wet towels on their heads and carried electric fans as they queued uncovered.

Reuters witnesses saw one person being escorted away in a wheelchair by medical personnel as they suffered in the heat.

“The heat is much worse in comparison with previous years, so for example if a worker works for one hour, companies should implement mandatory 10-minute breaks,” said comic book fan Takeyuki Sakano.

“People tend to work too hard and push themselves over the edge, so having higher ups (managers) mandate these breaks as rules is necessary.”

Most Olympics have been held during the northern hemisphere summer. However, when Tokyo hosted the Games previously, in 1964, they were shifted to October to avoid the heat. The Mexico 1968 Olympics were also held later.

Such shifts are no longer possible, though, due to international broadcasting and sports schedules, including the U.S. American football season and European soccer. Athens 2004 and Beijing 2008 were held in summer despite the climate of both cities.

The start times for the men’s and women’s marathons, on Aug. 9 and 2 respectively, have been moved to 6:00 a.m. as an additional precaution.

Tokyo is hosting the Olympics for the second time, with the Games running from July 24 to Aug. 9.