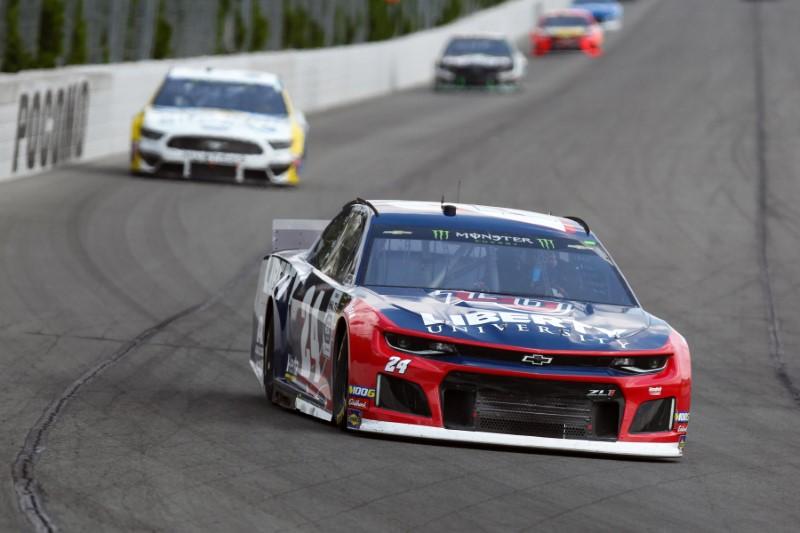 You’d never know from William Byron’s demeanor or his language that the 21-year-old driver of the No. 24 Hendrick Motorsports Chevrolet had just finished fourth in Sunday’s Gander RV 400 at Pocono Raceway in Long Pond, Pa.

“It was a struggle,” said Byron, who restarted sixth in overtime and passed both Kyle Larson and Kevin Harvick to post his second top five of the season. “I felt like the guys did a good job with strategy, and being able to maximize on restarts. We got fortunate on a couple of things. We go on from it and move on to Watkins Glen.”

With five races left in the Monster Energy NASCAR Cup Series regular season, Byron remains 12th in the standings, but he increased his margin over Hendrick teammate Jimmie Johnson — the 17th-place driver and first currently outside the playoffs — to 62 points.

Nevertheless, after the strong run at Pocono, Byron seemed more focused on the difficulty he faced at the Tricky Triangle, where he started 31st after his car failed post-qualifying inspection. After pitting for the last time on Lap 115, Byron saved just enough fuel to make it to the end of the race, which went three laps beyond its posted distance.

“It was a tough day,” Byron said. “We didn’t really have a lot going our way. In the first stage, and even the second stage, we were just kind of hanging on.

KYLE LARSON DRIVES HIS BACKUP CAR TO A FIFTH-PLACE FINISH

For the second straight week, Larson started a Monster Energy NASCAR Cup Series race from the rear of the field in a backup car. But his run Sunday was considerably more satisfying than the day he had last weekend at New Hampshire.

Larson crashed 10 minutes into opening practice Saturday morning and had very few laps on his backup No. 42 Chip Ganassi Racing Chevrolet before qualifying. He was 29th fastest in time trials but, under NASCAR rules, had to drop to the back of the field for the start.

At times during Sunday’s race, Larson had the fastest car on the track. By the end of the first stage, he was sixth and he remained in contention throughout the balance of the race (though his running position varied according to divergent strategies and pit stop cycles).

When the race went to overtime, Larson lined up fourth and pushed race winner Denny Hamlin out front on the final restart. Larson had a close call with the wall in overtime and lost a position when he slowed to avoid contact with the barrier.

“I didn’t hit the wall, but I got close,” said Larson, who finished fifth. “I knew I was going to be close to the wall, so I bailed out of the throttle to keep myself from hitting the wall and lost momentum. I felt bad, but it was better than ending up torn up like the last time I was aggressive on a restart.

“It was a good day. It was a lot better car than I thought I was going to have, so it just goes to show how good our team is right now and how good our cars are. Last week, I felt like we had one of the fastest cars and we didn’t get to show it (because of two wrecks during the race). Today, I felt like we were one of the fastest cars. If I could just race a primary car, who knows what we could do? I just have to clean up a little bit of what I’m doing in practice and the races, and hopefully we can get a win.”

Inopportune cautions foiled the best-laid plans of both Harvick and Kyle Busch — and their respective crew chiefs.

Even though those two drivers arguably had the best two cars for the entirety of Sunday’s race, neither was in position to challenge for the victory once overtime became inevitable.

The winner of Stage 1, Busch stayed on the track and retained the lead for a restart on Lap 119 of 163. Unable to reach the end of the race on fuel, however, Busch came to pit road on lap 134 and fell to 26th in the running order. He spent the rest of the event working his way back up, ultimately finishing ninth. His Joe Gibbs Racing teammates — Hamlin, Erik Jones and Martin Truex Jr. — swept the top three spots.

Harvick drove his No. 4 Stewart-Haas Racing Ford to third place in Stage 1, second in Stage 2 and the lead when the green flag dropped on Lap 104 to begin the final stage. But he lost the top spot to Hamlin on the restart lap and never regained it.

The way Harvick saw it, a pair of cautions in the last 10 laps deprived him of the chance to win in a car that was set up for long runs.

“If the caution doesn’t come out, I think we were in good shape, but that’s the way it goes, especially at this place,” said Harvick, who was trying to double up on last Sunday’s victory at New Hampshire. “You have to have the cautions fall your way, and you have to have everything go right.

“We just had a few little things here and there that didn’t go our way and wound up sixth.”