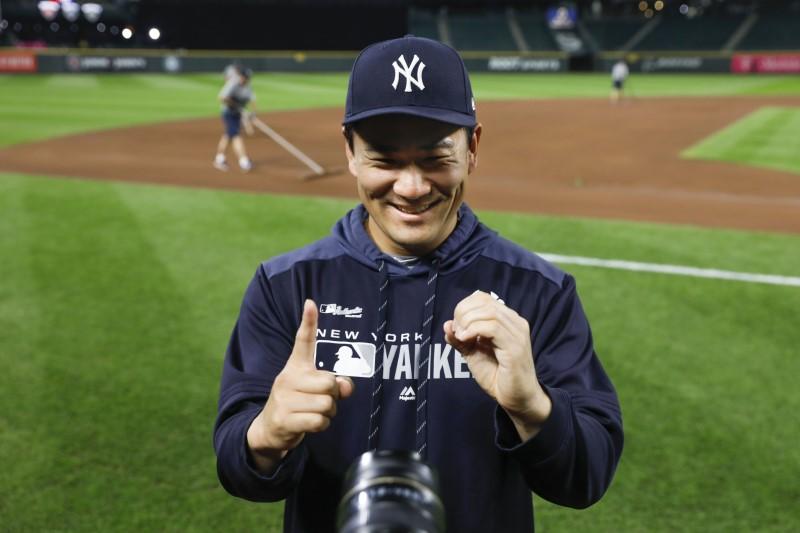 Aug 27, 2019; Seattle, WA, USA; New York Yankees starting pitcher Masahiro Tanaka (19) makes the number 10 with his hands for a photo following a 7-0 victory against the Seattle Mariners at T-Mobile Park. The victory was his 10th of the season. Mandatory Credit: Joe Nicholson-USA TODAY Sports

Brett Gardner also homered for the Yankees, who won their third consecutive game and remained tied with the Los Angeles Dodgers for the best record in the major leagues at 87-47.

Judge hit a two-run shot off Mariners left-hander Yusei Kikuchi (5-9) in the first inning. The blast to straightaway center field hit halfway up the batter’s eye and was projected by Statcast at 462 feet.

The homer was the 100th of Judge’s career, making him the third-fastest player to reach that mark. He accomplished the feat in 371 games, trailing only former Philadelphia standout Ryan Howard (325 games) and Yankees teammate Gary Sanchez (355).

The Cardinals have won 15 of their last 18 games while the Brewers have dropped six of their past nine.

Molina went 3-for-3 with a walk, a double, two homers and three RBIs. He has seven multi-homer games in his career, and four have come against the Brewers.

Alonso, the NL Rookie of the Year favorite, homered well beyond the right field fence on Darvish’s first pitch of the fourth inning. It was his 42nd homer of the season, breaking a tie with Todd Hundley (1996) and Carlos Beltran (2006).

Buehler (11-3) stretched his scoreless innings streak to 13 as he held San Diego to four hits and two walks with 11 strikeouts. The Dodgers had lost three of their previous four games. The Padres saw their two-game winning streak end.

Joc Pederson homered for the Dodgers, who got three hits and two runs apiece from A.J. Pollock and Matt Beaty.

Justin Verlander carried a shutout into the sixth inning before being ejected as host Houston pounded Tampa Bay.

Verlander (16-5) had his streak of starts with double-digit strikeouts snapped at seven, one shy of the major league record held by Red Sox left-hander Chris Sale. Verlander recorded four strikeouts while allowing four hits over 5 1/3 innings, but he was tossed for arguing balls and strikes with plate umpire Pat Hoberg.

Yordan Alvarez (3-for-5, four RBIs) posted the fourth multi-homer game of his rookie season, cranking a three-run, opposite-field shot in the fifth and a solo homer to right in the seventh.

The Pirates scored a tiebreaking unearned run on Rhys Hoskins’ error in the ninth inning, and Pittsburgh posted a win over host Philadelphia.

Locked in a 4-4 game in the top of the ninth, Pittsburgh’s Kevin Newman appeared to hit an inning-ending double play on a hard grounder to second. However, first baseman Hoskins dropped shortstop Jean Segura’s strong throw, preventing the twin-killing, allowing Adam Frazier to score off Hector Neris (2-5).

Pirates closer Felipe Vazquez (5-1) retired all four batters he faced, including a strikeout of Bryce Harper on a 2-2 curveball to end the game.

Minnesota’s bullpen preserved the club’s third straight win. Sam Dyson, Tyler Duffey and Sergio Romo each contributed a scoreless inning before Taylor Rogers pitched a 1-2-3 ninth for his 21st save.

The Indians are now 13-1 against the Tigers this season, and they have won 12 straight against the worst team in baseball.

Carlos Santana collected three of Cleveland’s 13 hits. Adam Plutko (6-3) gave up one run in 5 2/3 innings and struck out nine.

Marcus Semien scored a run in the first inning and drove in a run in the second as Oakland won at Kansas City.

A night after scoring 19 runs on 22 hits, the A’s were limited to just two runs on five hits.

Anthony Santander and Jonathan Villar each drove in runs in the first inning, and starter Aaron Brooks and the bullpen made them stand up as visiting Baltimore defeated Washington.

Baltimore earned its third win a row. The Orioles stopped the Nationals’ five-game run, which included a three-game sweep over the Cubs in Chicago over the weekend.

Kole Calhoun and Brian Goodwin came up with clutch hits in the seventh inning, Mike Trout hit his major-league-leading 43rd home run, and Los Angeles rallied for a win over Texas in Anaheim, Calif.

Rangers starter Mike Minor thoroughly stifled the Angels through six innings, shutting them out on one hit. But in the seventh, the Los Angeles offense came to life, highlighted by a two-run double by Calhoun and a pinch-hit, two-run single by Goodwin.

Trout, hitless in his first three at-bats, homered in the eighth inning, ending a homerless streak of five games.

Catcher Curt Casali had a big game for the Reds, tying the score 3-3 with a solo homer in the fourth inning and giving Cincinnati a lead it did not relinquish with a two-run single in the fifth.

The Reds also got two-run homers from Eugenio Suarez and Nick Senzel. Suarez, who has a team-best and a career-high 37 homers, leads all National League players with 17 second-half dingers.

Rick Porcello (12-10) struck out five over five innings to help Boston win for the eighth time in 11 games and keep its playoff hopes alive.

Sam Hilliard homered in his major league debut, and Nolan Arenado also went deep for Colorado. It was the second time a Rockies player homered in his debut this season, as Dom Nunez did it earlier this month. Colorado starter Rico Garcia (0-1) also made his big league debut and allowed six runs in five innings.

Ketel Marte homered on a pitch on which he sustained a hamstring injury, and Mike Leake pitched his best game since an in-season trade, sending Arizona to a victory over host San Francisco.

Kevin Ginkel pitched out of an eighth-inning jam to preserve a late lead for the Diamondbacks, who moved 1 1/2 games up on the Giants in their battle to stay relevant in the National League playoff chase.

After Giants starter Jeff Samardzija was taken out of a 1-1 game after five innings, the Diamondbacks jumped on reliever Sam Coonrod (4-1) for three consecutive hits to start the sixth, with Christian Walker scoring the go-ahead run on Adam Jones’ single.